Blast from the past provides pandemic relief 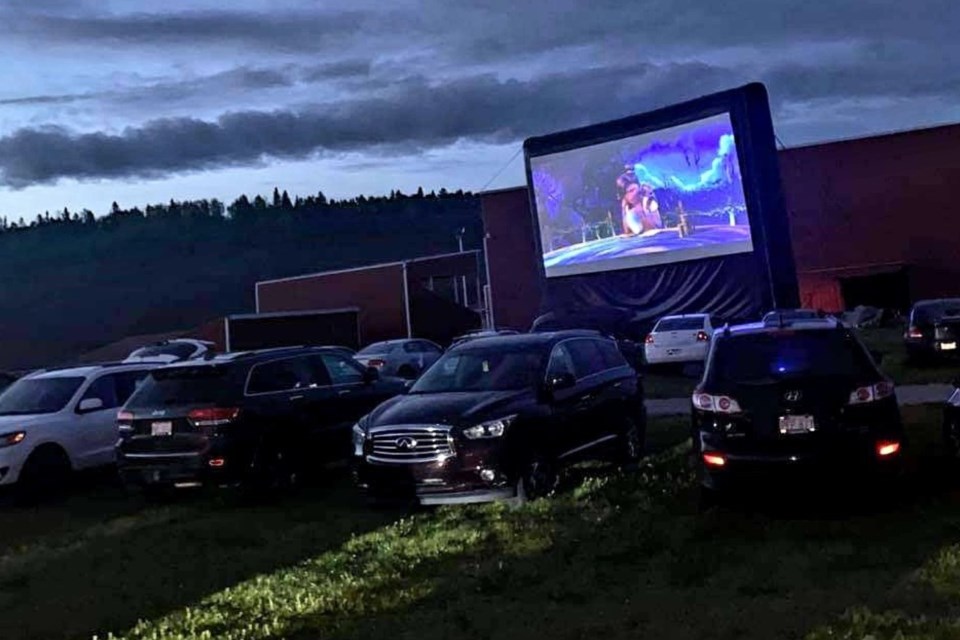 Almost 300 people in 85 vehicles came out on Friday, May 28 to the Sundre Rodeo Grounds, where the Greenwood Neighbourhood Place Society hosted a nostalgic blast from the past in the form of a drive-in theatre with a large screen measuring about 11.3 metres (37 feet) high by roughly 14 metres (46 feet) wide. Photo courtesy of GNP

SUNDRE — Once a popular option for a night out at the movies that provided entertainment within the comfort of one’s own vehicle, drive-in theatres have long since all but disappeared.

But perhaps they’re poised to make a pandemic-induced comeback as a safe way to indulge in a little escapism from life’s daily stresses with others while still maintaining physical spacing between groups of people.

Recognizing the need to offer the community some much-needed COVID-19 fatigue relief, the Greenwood Neighbourhood Place Society made arrangements to provide a nostalgic blast from the past by hosting at the Sundre Rodeo Grounds on Friday, May 28 a temporary drive-in movie that drew out a sizeable crowd.

Featuring a family-friendly film called The Croods 2: A New Age, the sequel to the 2013 original simply titled The Croods — the story about a pre-historic family forced to adapt to sudden and irreversible life-altering changes — the showing was attended by 280 people who came out in 85 vehicles, said Cherie Johnson, the society’s program coordinator.

“This film was not just for kids,” Johnson wrote by email in response to follow-up questions.

“We had a mixture of families with littles ones to teenagers and seniors — definitely fun for all ages,” she told The Albertan.

“Everyone was super creative on how they were experiencing the movie, cozy blankets and kids in their pajamas. They also came prepared with munchies to watch the show.”

Contributing the quintessential movie snack — popcorn, in the form of 60 bags — was Marty Mennear of the former IGA, which has recently come under the management of Freson Bros.

Additionally, Sundre Tim Hortons donated 150, $4 gift cards to hand out as people came through the gate, she said.

“We were super happy with the turnout. And the feedback from the people who attended was super positive.”

Among some of the many comments shared on social media were “What a great idea!” and “Please do this event again!”

The logistics involved required obtaining a licence to play the movie publicly as well as renting the rodeo grounds and hiring a crew from Fresh Air Cinema to set up the large temporary screen — “a huge task that took seven hours to set up and take down the equipment for the movie,” she said.

“All of the volunteers helped make this a super success," she said.

The society had initially intended to host a drive-in movie last year; however, bad weather put a damper in those plans, she said.

“It was a bit of a challenge to plan at this time of year as the days are longer, making the (play) time later,” she said.

“But this did not deter people from coming out to receive a taste of the old drive-in movie experience.”