A glimmer of light goes a long way in Sundre 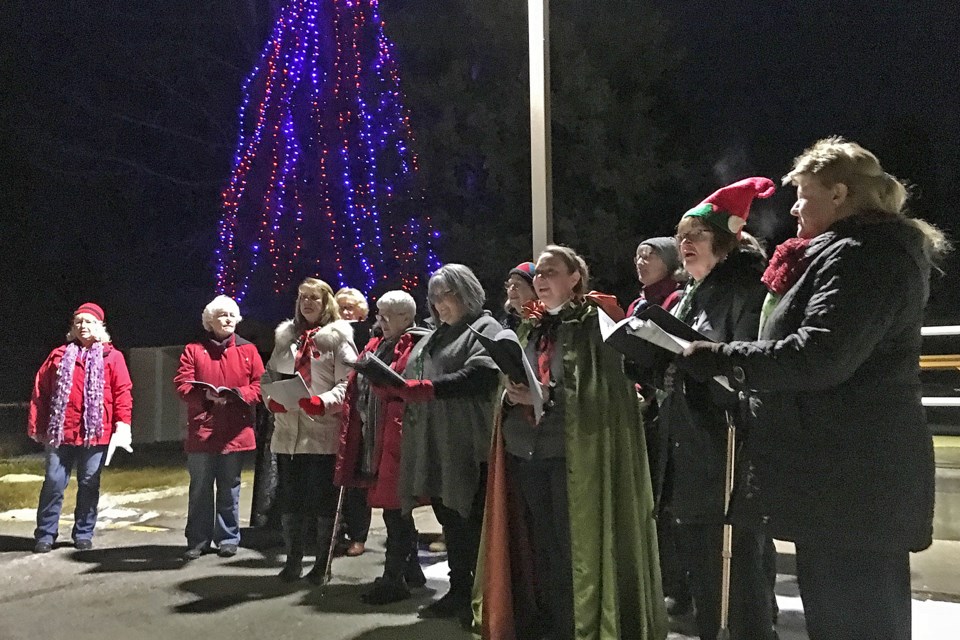 SUNDRE — A little glimmer of hope can go a long way towards alleviating the duress of life’s daunting final journey.

The annual Tree of Hope lighting ceremony and fundraiser, which supports palliative care at Sundre Hospital and Care Centre was scheduled for Friday, Nov. 29.

The lighting ceremony at the hospital included the reading of names of loved ones and carols sung by Sundre Community Choir at the hospital, said Jo-Anne McDonald, a member of the Sundre Palliative Care Association who organizes the Tree of Hope with help from fellow volunteer members.

The annual event raises funds for the association’s efforts to provide individuals and families with a support network during life’s last chapter, she said. Blue bulbs are lit in memory of loved ones who have passed on, while red bulbs send a message of hope to those who need support.

“Last year was actually a really stellar year,” she said, adding more than $4,000 was raised.

“I was so excited that we were able to achieve that...last year was an exceptional year.”

Organizers generally aim to raise about $3,000, she added.

“That’s what we like to set as a goal,” she said, expressing optimism for another outstanding year.

While that objective has often been achieved, she said the overall amount raised has over the years fluctuated depending on how much people were able to donate, especially understanding the difficult financial situation many people find themselves in.

The funds support not only patients and their families, but also provide enhanced training and development opportunities for staff, she said, citing as an example about $7,000 that was invested on bereavement and grief management workshops.

“That was one thing in the past that we had people ask us about,” she said.

Extending a helping hand during the final days of someone’s life is important, but those who are afterwards left behind to grieve often benefit from continued support, she said.

“We’re just going to keep trying our best to keep raising money for our community,” she said, adding everyone will at some point or another inevitably benefit from the services provided by palliative care, whether for a loved one or for themselves.

“Our population is aging,” she said, adding, “Palliative care needs to be out in the forefront.”

Anyone interested in supporting the association can find and fill out a pledge form, she said.

“We have pledge forms at many of the local businesses in town,” she said, adding they can also be found — and subsequently dropped off — at the hospital’s main admissions counter during regular hours.

McDonald has been involved with the initiative since it started almost 10 years ago. At the time, the association was struggling, but has since made substantial progress towards raising funds that are spent back into the community, she said.

“I get a great deal of joy in helping with the Tree of Hope campaign,” she said.

“It’s great to see the money that we raise be used within the community.”

Grief is not something that just goes away, and managing the magnitude of a personal loss is an ongoing process. Whether a few months or many years later, those feelings don’t just disappear with the passing of time, and people benefit from learning coping mechanisms, she said.

The following are some of the programs and initiatives made possible through funds raised by the association:

• Bringing educational and informational opportunities to the community on a wide range of topics in the new Let’s Talk About sessions.

• Funding about $7,000 for health care staff to attend training about dementia.

• Providing many hours of volunteer service for those at end-of-life-care.

• Helping fund repairs to the palliative care room at the hospital.

• Engaging with the community to increase awareness about the association at farmers markets, Neighbours’ Day as well as the Mayor’s Prayer Breakfast.

Bylaw change allows confidential matters to be discussed remotely
May 31, 2020 6:00 AM

Town of Sundre in good fiscal position to weather pandemic
May 29, 2020 6:00 AM
Comments
We welcome your feedback and encourage you to share your thoughts. We ask that you be respectful of others and their points of view, refrain from personal attacks and stay on topic. To learn about our commenting policies and how we moderate, please read our Community Guidelines.