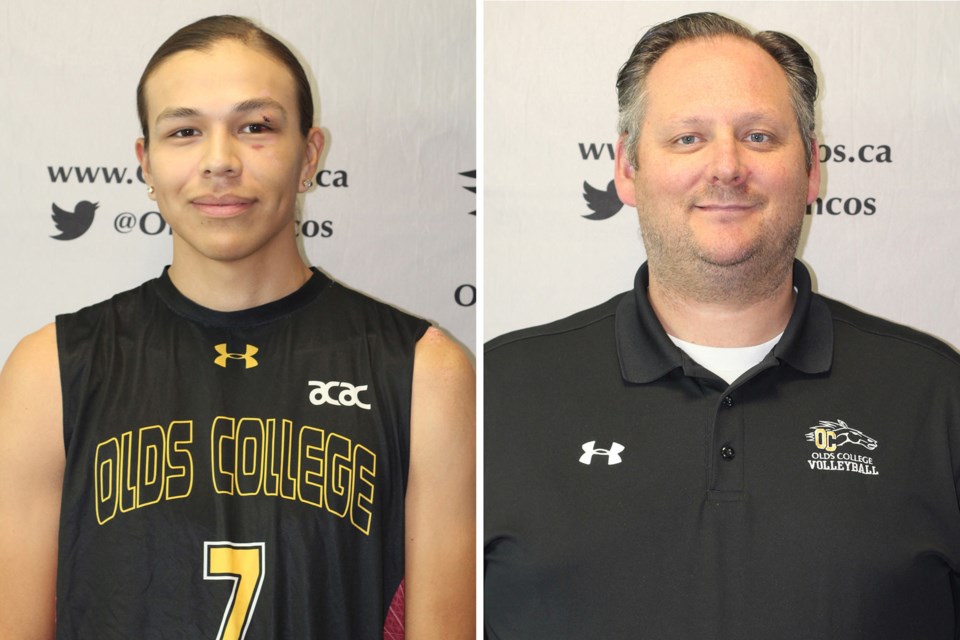 OLDS — Head coach Ryan Marsden is ACAC Men’s volleyball coach of the year and Thundersky Walkingbear is the men’s volleyball all-conference outside hitter.

Marsden and Walkingbear received their awards on Wednesday, Feb. 26, during the ACAC men's volleyball conference championship banquet held in Lethbridge.

Marsden is in his second year as the Broncos’ head men's volleyball coach after a six-year break from coaching ACAC volleyball.

Prior to coming to Olds, Marsden was the head coach of the SAIT Trojans men's volleyball team from 2007 – 2012.

During that time, he led the team to an ACAC provincial championship (2010) and a silver medal at CCAA nationals (2010).

Before that, he coached at Mount Royal University, the University of Alberta, and University College of the Cariboo (Thompson Rivers University).

During the 2019-20 season, the Olds College Broncos men's volleyball team had a goal to make history as the previous three seasons saw the Broncos finish dead last with 0-24 records.

That streak ended in dramatic fashion as the Broncos swept the Ambrose Lions on Nov.15 and 16, 2019.

Those were the first back-to-back wins for the Broncos since being re-instated into the ACAC back in 2012-2013.

The Broncos continued battling all season long and ended up with a 6-18 record.

That may not look impressive to all, but is a tremendous achievement for a young Broncos team focused on changing the trajectory for Olds College Broncos men's volleyball.

"The work that Ryan and his coaching staff have done to lead, mentor and develop the student-athletes of the men's volleyball program has been tremendous," says Broncos athletics manager Trina Radcliffe.

"This group of players and coaches have been on a mission the last two years to change not only the on-court success but have also worked extremely hard academically and have been leaders in the community."

Walkingbear is the eighth Broncos men’s volleyball player to be named to an ACAC all-conference team and the first since the 1992-93 season.

The sports management student-athlete was a leader on his team this season and will look to help build on the Broncos growth into next season.

Happy Thanksgiving
Oct 13, 2019 12:33 PM
Comments
We welcome your feedback and encourage you to share your thoughts. We ask that you be respectful of others and their points of view, refrain from personal attacks and stay on topic. To learn about our commenting policies and how we moderate, please read our Community Guidelines.