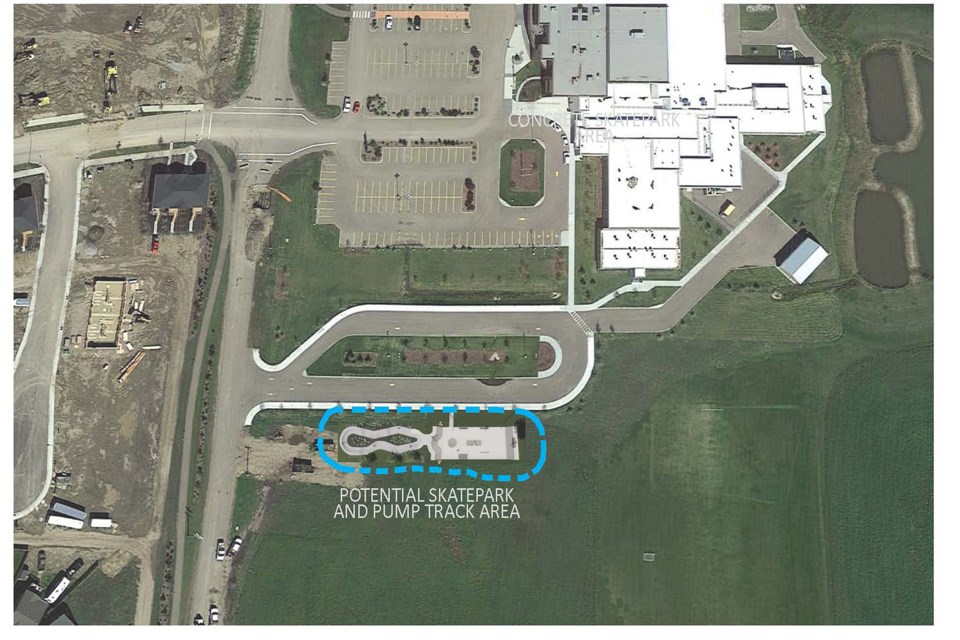 A concept aerial image from October 2019 of a joint skatepark and pump track facility (inside blue circle) just south of the Penhold Regional Multiplex. It's expected the Town of Penhold will receive new concept images and/or drawings later this year. New Line Skateparks photo

PENHOLD – After spending a decade in the sidelines watching the skatepark project trudge through fundraising challenges the Town of Penhold is aggressively jumping in with a $150,000 financial commitment with an eye to see it built next year.

And the town wants to do it with an addition of a pump track for BMX riders.

“We will be working with the Optimists and the money that they have raised and pooling that money together to build something, the design yet to be determined. It will be a mixture of a skatepark and pump track,” said Town of Penhold Mayor Mike Yargeau, noting council passed a motion in July to put $150,000 into next year’s budget for a skatepark/pump track project.

“It will be built at the same time by the same contractor but I don’t know exactly what it is going to look like. I assume it will be all one facility but we haven’t really gone into the design part yet.”

He acknowledged it has been a long time coming for the town to become actively involved in the project, which has been spearheaded by the Penhold Optimist Club for the past decade, but added the time was right for council to be “ready to do something now.

“The skatepark project in Penhold has been going for quite a long time. The fundraising has stalled. They never got to where they wanted it to be,” he said.

“Just through experience and through talking to other towns and seeing what they have done and bringing some costs down, we’ve incorporated the pump track idea, which is multi-sport friendly and also considerably cheaper. With the Optimist money we can still add the skatepark with it.”

Yargeau emphasized the town will be working collaboratively with the Optimist club, and the final design approval will come from a committee comprised of town councilors and Optimist club members.

From there, said Yargeau, the town will then build, hopefully starting in the spring of 2021. He said the location will be “roughly” in the same location just south of the Penhold Regional Multiplex but because of plans and ongoing discussions with the Chinook’s Edge School Division for a new middle school the exact site may be changed.

Brenda Mahoney, skatepark committee chair, said her group was recently notified by the town of its intent to contribute financially and have a pump track added to the project.

Last year, the committee decided to downgrade the size of its skateboard project from an estimated cost of up to $650,000 to one in the $300,000 range. She said having a skatepark component to the project remains vital to the youth of the community.

“We do want something for the kids. That is the main thing. In my opinion we have been raising money for a skatepark and we owe it to the children who started this 10 years ago to build a skatepark,” she said, noting final details have not yet been worked out between the committee and town on how each will proceed with responsibilities for the overall project.

“There is nothing in writing at this time,” she said. “It was all just a discussion on how they would like to be able to work with the funds we have to add their funds to build something that would be really great for the kids.”

The committee has so far raised $100,000 for the skatepark, and recently received a $3,000 grant from the Canadian Children’s Optimist Foundation, she said.

Another application for a small-scale matching grant of $100,000 would be submitted to the provincial Community Facility Enhancement Program (CFEP) before Sept. 15, she said.

“We have been working on it,” she said, noting it would be the committee’s second attempt for a CFEP grant. “It’s a learning experience because we don’t know much about grants.”

In the meantime, Yargeau said the town is just starting to get involved in the long awaited project and work with designers will begin this month to find out what is the best fit for the community.

“We are going to be kicking it up more as we get into budget to make sure we have something ready for next year,” said Yargeau.

Train whistles are staying in Penhold
Oct 6, 2020 5:00 PM
Comments
We welcome your feedback and encourage you to share your thoughts. We ask that you be respectful of others and their points of view, refrain from personal attacks and stay on topic. To learn about our commenting policies and how we moderate, please read our Community Guidelines.