Roadside sendoff a display of support for Penhold cancer patient 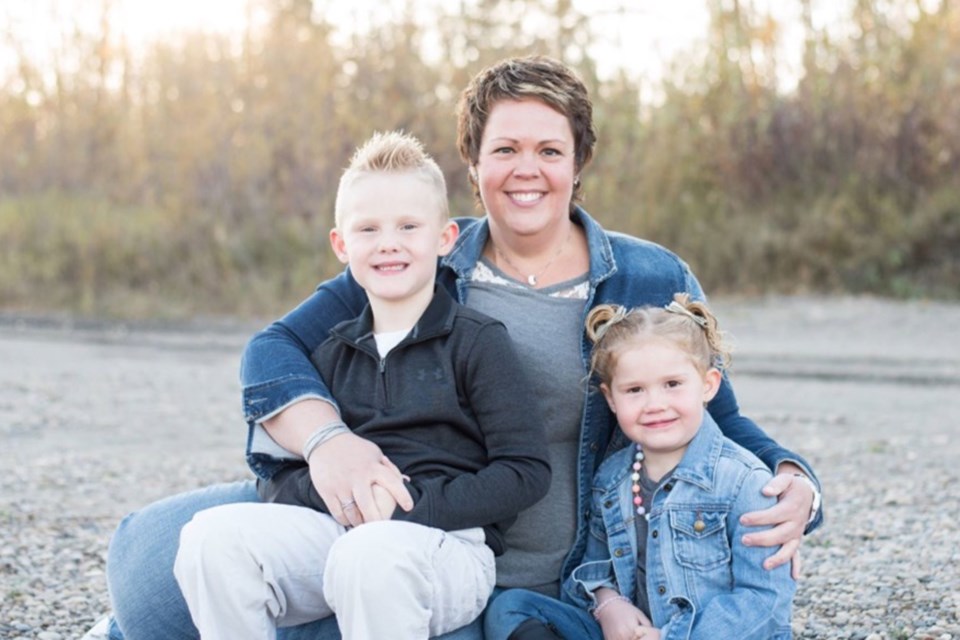 Lisa Duke, pictured with her two children, Troy, 7, and Mariah, 6. Photo courtesy of GoFundMe campaign
PENHOLD — Although family and friends of local resident Lisa Duke are unable to physically accompany her to the hospital in Red Deer as she undergoes treatment for stage 4 metastatic breast cancer, they nevertheless want her to know she is not alone.

So close friend Tosha Giesbrecht, also from Penhold, organized a roadside sendoff as Duke, 37, was driven out to her chemotherapy appointment last week. About 20 vehicles, plus a peace officer and a firetruck, parked along the east side Highway 2A coming out of Penhold on the morning of Thursday, April 23.

“For anybody who’s going through cancer, or is palliative, to have to go through that alone, is a big, scary thing,” said Giesbrecht, a registered nurse who works at a detox facility.

“And so I wanted Lisa to know that we might not be there physically for her, but we’re there. We’re there with her, we’re there for her.”

Having originally met through the hockey community in Innisfail, Giesbrecht said her daughter also attended the same before and after school program as Duke’s two young children, Troy, 7, and Mariah, 6.

“She had just been cleared to go back to work,” said Giesbrecht.

But four days later, a follow-up scan revealed that the cancer “had metastasized and she was now palliative.”

Upon learning about Duke’s circumstances, Giesbrecht instantly felt compelled to do whatever she could to help. Just before Christmas in 2018, she conducted a fundraiser to collect items such as gift cards. From that point, she said their friendship blossomed.

“We’ve kind of become almost like sisters,” she said.

“My husband, my daughter and I were planning a trip to Mexico, just this last March, and Lisa said that it was kind of bucket list to do with her kids before she was too sick and couldn’t travel. But of course being a single parent, the doctors didn’t recommend that she go alone with the kids,” said Giesbrecht.

So they extended an invitation for Duke and her children to join, and the group embarked on a week-long adventure together. The timing could not have been more perfect.

“Everything was pretty good when we left,” said Giesbrecht, adding the departure was March 3 and that they were back home March 10, just before the COVID-19 pandemic prompted widespread closures.

“It went form zero to 100 within the two days that we got back,” she said.

In spite of everything, she said fighting back tears that Duke has demonstrated inspirational resilience and bravery in the face of such adversity.

“The one thing through her cancer battle is that she just remains so upbeat and positive and optimistic.”

As though the cancer was not bad enough, the pandemic made an already difficult situation the more challenging, she said.

“It’s hard, because she had all these things that she wanted to be out doing with her kids.”

Ever since Duke was diagnosed as palliative, she has been motivated to make as many memories as possible — not for herself, but for her family and friends to remember her by once she’s gone, said Giesbrecht.

So being on lockdown as someone with a compromised immune system who cannot so much as grab a few groceries at the store has placed a major roadblock on the path to that vision, she said.

“All those dreams of things that she thought she would be doing this spring and this summer, you know, that’s been taken away from her.”

While the first trip to the hospital remained normal immediately upon their return from Mexico, Duke — who enjoys being surrounded by people during those visits — can no longer have anybody accompany her as she gets treatment, she said.

“Lisa’s just very much a social butterfly. That support really is what helps her get through.”

That all changed dramatically when hospitals introduced new protocols, although during Duke’s last visit, her sister was still allowed to be by her side, said Giesbrecht.

“She said even just walking in (to the hospital) was frightening, because everybody was gowned and masked. So it was just a very different, somber feeling.”

But Duke had to go in by herself for the most recent visit, which was largely the reason Giesbrecht wanted to organize the roadside sendoff.

Wanting to ensure the show of support would not breach any rules, she contacted the municipality’s peace officer, who ended up attending as the lead vehicle. Even the fire department dispatched a truck, which took up the rear, she said.

“I told everyone to stay within their own vehicle, and to be mindful of social distancing.”

Giesbrecht said she received a text from Duke’s sister informing her they were on their way at about 10:30 a.m.

“Lisa didn’t know, it was a total surprise for her. She was in tears,” said Giesbrecht.

“She called me when I pulled into the driveway afterwards, and she could hardly speak. She was overwhelmed and appreciative.”

“To have everybody there was awesome,” she said.

“The big thing is just that as much as what we’re going through with the pandemic sucks, let’s just all be kind and be supportive. Because we don’t know the journey that other people are going through,” said Giesbrecht.

“Even when things are rough for us, we can still reach out and be supportive and be encouraging for those who have greater challenges than we do.”

Penhold lowers property taxes for 2020
May 21, 2020 8:00 AM
Comments
We welcome your feedback and encourage you to share your thoughts. We ask that you be respectful of others and their points of view, refrain from personal attacks and stay on topic. To learn about our commenting policies and how we moderate, please read our Community Guidelines.