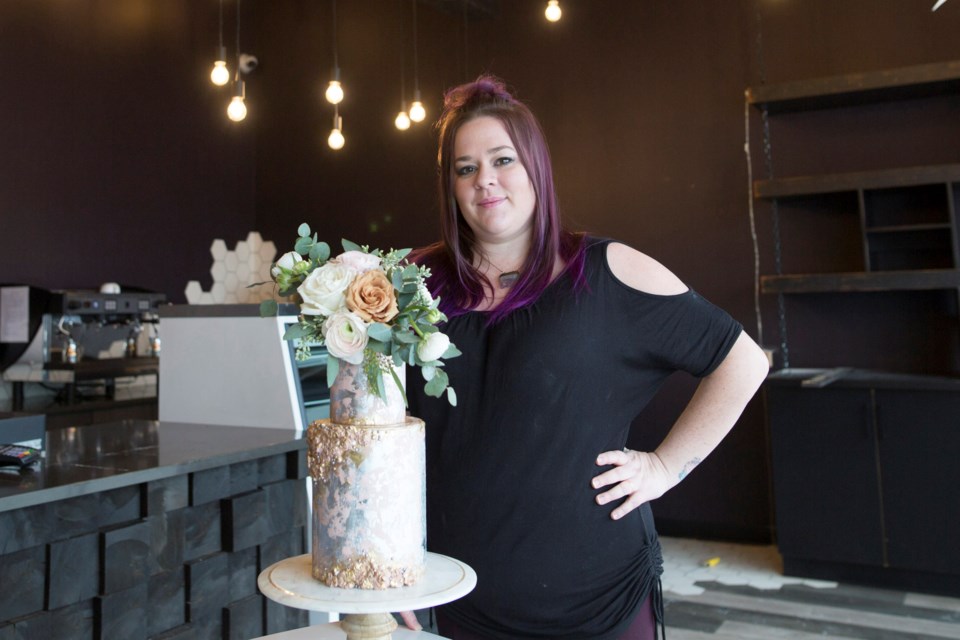 PENHOLD – Despite a difficult economic climate across much of Alberta one award-winning local small business is taking a giant leap of faith.

Penhold’s Sugar By Tracy is expanding after two years of success.

“We’ve just outgrown our space. Our kitchen’s just not big enough,” said Tracy Irwin, owner of the business, often described as a luxury cake studio specializing in gourmet desserts. “We needed a walk-in cooler and a walk-in freezer.”

The expansion is on the north side of the current location in the Hawridge Plaza. It will almost double in size, noted Irwin, with the original 1,500-square-foot store expanding by an additional 1,300 square feet.

Irwin said she's hoping the investment is one that will pay off.

“It’s about $250,000. This (original) part was $300,000 and I’m just doing it again. It’s nerve-racking with the economy and seeing all these other businesses closing,” said Irwin. “It’s super nerve-racking to make a jump and a commitment like that, but at this point in my business we’re turning down custom work because we don’t have the space.

“I don’t want to be turning away orders so we’re expanding so that our kitchen’s bigger and we can handle all of our custom work,” she added.

Sugar By Tracy first opened two years ago. Since then Irwin has established a name and a reputation for herself and the store. Part of that reputation is thanks to not one but two Food Network television appearances.

The store's expansion comes hot on the heels of Irwin’s first Food Network competition win, which aired across Canada at the end of November.

Irwin made her Food Network debut in January 2019.

“The first time we went we came in second (place), which was amazing,” she said. “We had never done it and I was super proud of that.”

Irwin and her teammates, Darci Weil from Canmore and and Bo Hons from Calgary, had to create a Christmas-themed cake.

“I had a great team. It was huge (winning); it absolutely helped business,” said Irwin.

“Winning the Food Network (show) definitely helped get my name out a little bit more in the cake industry and a little more validation and reputability from that in the cake industry,” she said. “Here (in Penhold) being on TV and the Food Network is amazing publicity and the fact that we won, I think everybody is paying a little more attention to us and who I am and what I do.”

The business expansion will also bring changes to the menu, including offering vegetarian food, wine and having local craft beer on tap. “We’re also going to be expanding our menu a little bit to have some food options so that we’re going to be serving some healthier bowls and wraps," said Irwin.

Renovations began in early January and is expected to be done by Jan. 12.

The store will reopen for business Jan. 13, said Irwin, noting that not everything will be completed by that date with final touches completed over the next several weeks.

Penhold mayor Mike Yargeau was thrilled to hear the news of the local business expanding.

“She’s an incredible person and she’s (been) a really good community member since she opened up,” said Yargeau of Irwin and her store.

“I think this has helped contribute to her success in a great way,” he added. “She’s become such a part of the community when she opened that business. She has so much community support and it’s good to see that that’s paid off for her.”

Yargeau also noted the impact the local business has had in Penhold and what it means for the local economy and business community.

“For Penhold, obviously we’re happy any time we have successful businesses. We want all of our businesses to be successful,” he said. “Tracy’s a perfect example of how hard work and just being a good person can pay off.”