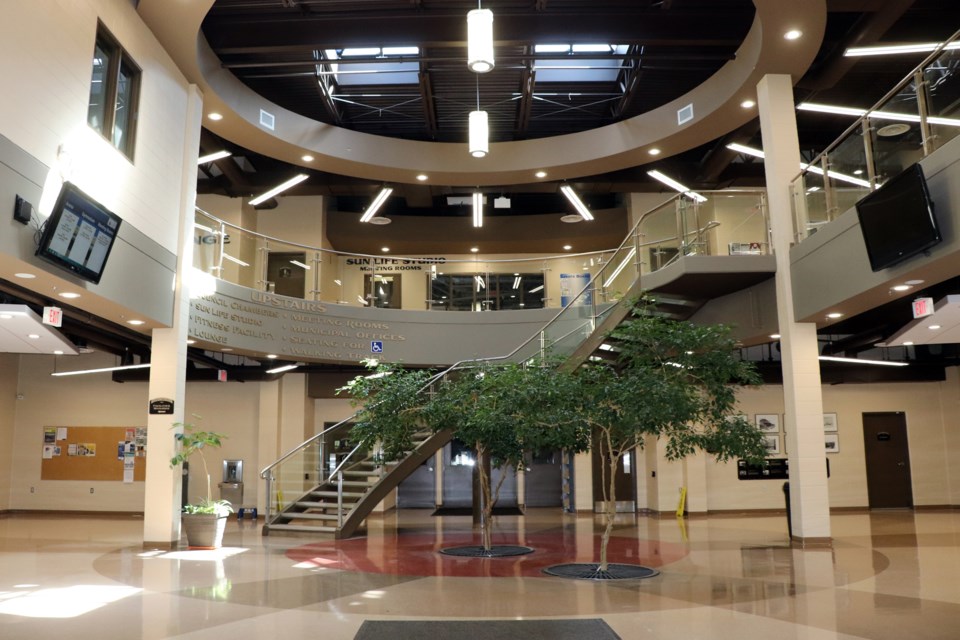 The new soft LED lighting in the lobby of the Penhold Regional Multiplex. The town has just completed a 395,393.32 LED lighting project that will have an annual savings for the community of $25,816. Johnnie Bachusky/MVP Staff

PENHOLD – First it was 1,092 solar panels installed outside on the roof of the Penhold Regional Multiplex.

And now there are 1,200 new LED lights - inside the multiplex.

The town’s most important and largest community and recreational facility is a modern-day model of top-of-the-line energy efficiency.

The facility is also a best example of how forward thinking can turn a multi-million dollar municipal building into a money saving facility for the community.

"Taking advantage of new technologies and available grants has helped the Town of Penhold reduce operating costs,” said Mike Yargeau, the town’s mayor. “This project, combined with the installation of over 1,000 solar panels, will save the town thousands per year."

The solar panel project has the town seeing a direct annual savings or profit of just over $11,000, after paying the annual $33,876 loan cost for the project.

Yargeau said the process to retrofit the lighting at the multiplex began about a year ago as the solar panel project was just getting underway.

He said Michael Szewczuk, the multiplex manager, identified the Recreation Energy Conservation (REC) program, which is administered by the Municipal Climate Change Action Centre (MCCAC), as the best cost-saving way to proceed.

“With council’s approval we went ahead and started planning the project. Once we had the plan and the pricing we submitted our proposal and we were approved,” said Yargeau. “It took a couple of months. There were a lot of lights.”

Szewczuk said the REC grant from the MCCAC allowed the town to replace all 1,200 multiplex lights from traditional fluorescent to clean and bright LED.

“We can notice the difference in the amount of light given off and quality. It’s been a great project for Penhold,” he said.

What is most important for the town and its taxpaying citizens is that the LED lighting project will save the town $25,816 annually, along with an energy savings of about 272,353 kWh per year. This retrofit will decrease the town’s green house gas emissions by about 172.9 tonnes.

What is also noteworthy with the investment is that the town will pay off its $$98,848.33 investment in four years with the new LED lighting.

“At the end of the day our goal is that we want to put ourselves in a more competitive position where we are attracting businesses, developers, homeowners so we can see continued growth,” said Yargeau. “And also we can start lowering everybody’s property taxes.”

Town moves into Penhold skatepark dream
Sep 17, 2020 4:00 PM
Comments
We welcome your feedback and encourage you to share your thoughts. We ask that you be respectful of others and their points of view, refrain from personal attacks and stay on topic. To learn about our commenting policies and how we moderate, please read our Community Guidelines.