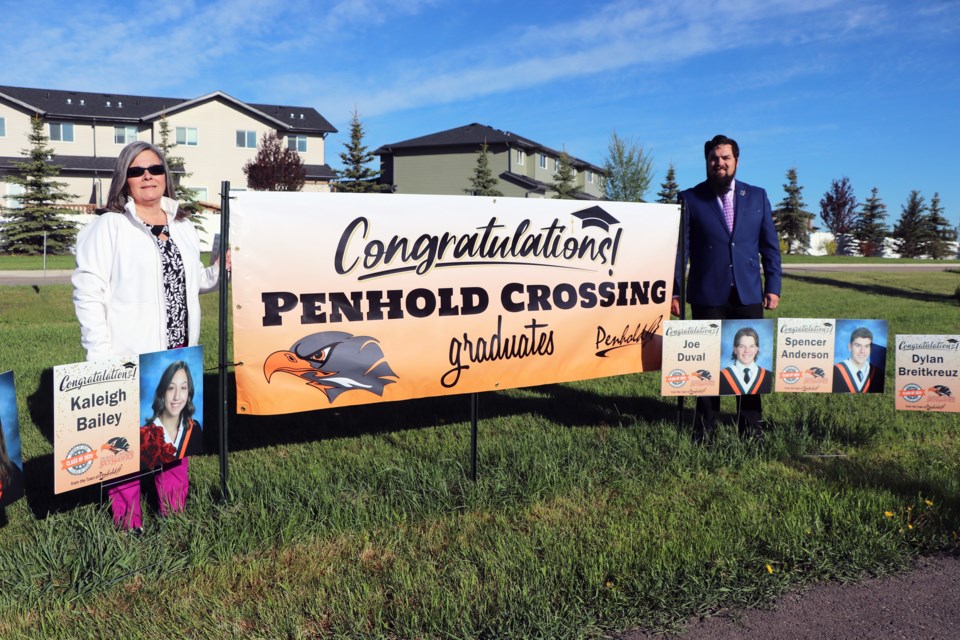 PENHOLD – The Town of Penhold wants the world to know they love their Class of COVID-19.

During the morning of June 1, a row of special signs honouring the town’s Grade 12 graduates was installed in front of the Penhold Regional Multiplex.

And then a special video was made for the young Penholders who must wait until sometime this coming fall to have a traditional graduation ceremony.

“You may not be celebrating graduation as you had hoped, and because of that we wanted to make sure your efforts and accomplishments did not go unnoticed,” said mayor Mike Yargeau during a speech after the installation of the signs. “Your graduation story will be like no other, the class of 2020 will share a special place in the history books.”

Yargeau said the town knew the pandemic cancellation weighed heavily on the spirits of the graduating students at Penhold Crossing Secondary School. He said a mission was initiated to find a remedy to turn an unsettling situation into something special for the teens. Yargeau said a “great idea” was then advanced by Carrie Black, the town’s communications and events coordinator.

"It's an awkward year for the grads, especially. They sort of miss out of a big part of their final year in school. We wanted to come out with some ideas to make it special for them, and Carrie had a great idea," said Yargeau.

He said the town ordered and acquired lawn signs, similar to those used by candidates during elections, for the grads. Each has their photo and all are marked with heartfelt congratulations from the town. They are now set up along Waskasoo Avenue in front of the multiplex, and will remain there for an undetermined period of time.

Yargeau and town staff were at the multiplex early in the morning to set up the signs and shoot a special video to honour the graduates, who were not part of the installation at the multiplex.

“We were just there with no grads. The goal is to get it up, get it done before the kids get up and start their day, hopefully,” said Yargeau.

“We will put out a nice video for them on social media and invite them to come by and have a look.”

Scott MacDonald, the principal the school, said the town’s initiative is a “great gesture” that will be appreciated by the school and community.

“This was entirely the idea of the town. They approached me about it. I worked with the division office (Chinook’s Edge) and the communications person to make sure our protocols were followed so it was both safe and respectful of students’ privacy,” said MacDonald. “Yes, I think they (students) are really going to appreciate what the town has done for them.”