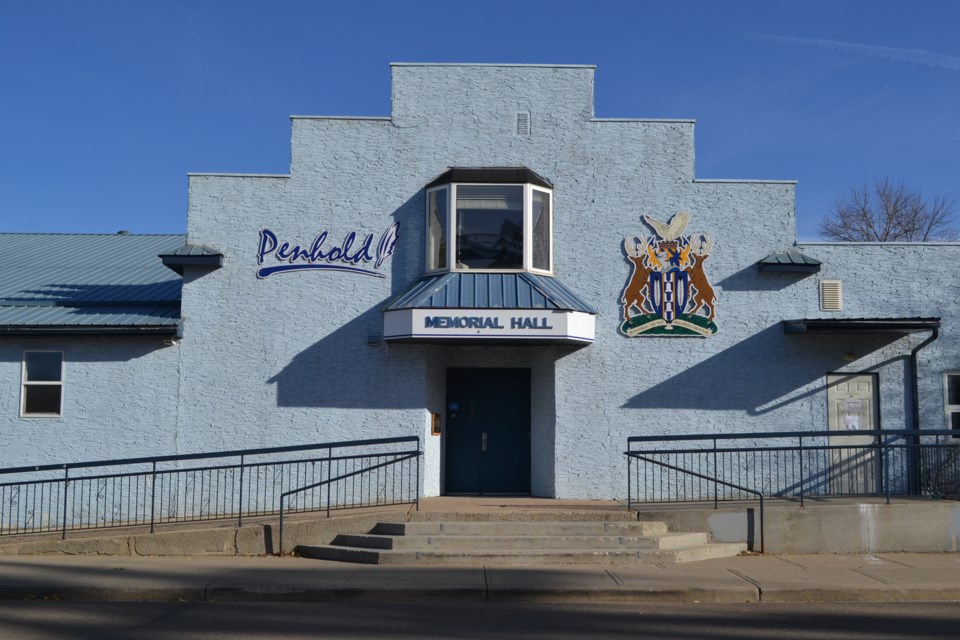 Penholders will pause to honour the 100th anniversary of the local Memorial Hall during Remembrance Day Services at the multiplex on Nov. 8. Johnnie Bachusky/MVP Staff

PENHOLD – The town is marking Remembrance Day with an evening service and commemoration of the 100th anniversary of the Penhold Memorial Hall.

The Penhold Memorial Hall was built as a memorial to the soliders who made the ultimate sacrifice during the First World War and as a thank you to honour those who were spared and returned home.

The memorial hall was the idea of Mrs. H.R. McDougall, president of the Penhold Women’s Institute, the organization that spearheaded the project and oversaw the building of the hall and its fundraising efforts.

Penhold resident, retired businessman and philanthropist Stewart Ford, will speak on the hall’s history during the Remembrance Day service.

Ford will share a short summary of why the hall was built and how it was done. The family business, Stewart Brothers, later Steward Supplies Ltd. (Penhold), had a role in the construction of the memorial hall, providing lumber for the project.

"It opened with a grand masquerade ball. There were 225 people and they were fed in two courses," said Ford, noting the kitchen was located in a small basement. Music for the grand opening was provided by the Great War Veterans Association (G.W.V.A) orchestra.

"Then they cleared the tables and got down to business.”

The original hall took six months to build and was 30 by 50 feet, noted Ford.

Ford said the hall was an important part of the Penhold community over the years and hosted local fairs, theatre groups, dances, weddings and anniversary events.

The hall is still used today for a variety of events and by community groups and local churches, noted Ford.

"It was the place you came to. They had the Friday night dance," said Ford. "Penhold was on the main north-south rail line in Alberta so if you had a theatre crowd going through, they would want to pick up as many spots as possible along the way to make some money," he added. "Penhold had a prized facility.”

"It was the main symbol that said this was a war memorial," he added. The curtain is now considered a "national treasure" and is in the hands of the Canadian War Museum in Ottawa.

The Penhold Women’s Institute operated the hall until about 1960s when they turned it over to the town.

Over the years, the hall was renovated and modernized with a 50- by 80-foot expansion that was added in the 1980s.

"It's still being used today,” said Ford. "Since then we've got the Penhold multiplex and the same sort of vision that got the multiplex built got the hall built."

"It's a great piece of Penhold history. It's a good opportunity for some of (our) newer residents to learn a bit about Penhold's history," said Yargeau. “Not many Penhold residents would know the history of the Penhold Memorial Hall because we have a lot of newer residents.

"There’s no one better than Stewart Ford to tell us all about the history, especially the original part of it.”

Junction 42 near Penhold welcomes its first businesses
Jan 28, 2020 6:25 AM
Comments
We welcome your feedback and encourage you to share your thoughts on this story. We ask that you be respectful of others and their points of view, refrain from personal attacks and stay on topic. To learn about our commenting policies and how we moderate, please read our Community Guidelines.