Penhold intersection on a long weekend can be ‘kind of crazy’ 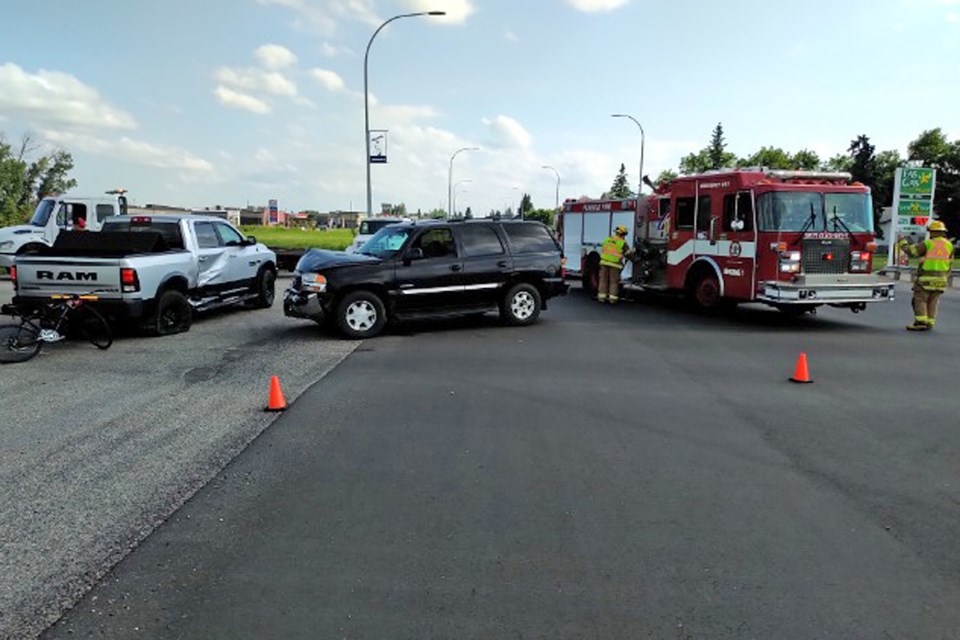 The Penhold Fire Department's chief feels that enhanced traffic control measures are needed at the intersection of Highway 2A and Highway 42 — the site of several collisions every year, including this July 31 crash. But an Alberta Transportation spokesperson told The Albertan that the two stop signs already in place for east and westbound traffic are considered adequate for existing levels of traffic. Submitted photo

Highway 2A is normally a challenge to cross at the busy intersection with Highway 42, but on a long weekend can become “kind of crazy,” said Jim Pendergast.

“Fortunately there were no injuries, and we immediately set up traffic management,” said Southwell.

Due to the nature of the timing being late afternoon on the Friday of a long weekend, the traffic volume was high and the flow was blocked in two directions. Three fire units along with the RCMP and EMS responded, and the highways were reopened by about 6 p.m., said Pendergast.

“We respond to this intersection several times a year and are hoping for some improvement in the near future,” he said.

The intersection is an important crossroads providing access for people in the region who are heading out west as far as Sylvan Lake or Rocky Mountain House and the backcountry beyond, as well as others travelling east to go camping or boating at places like Pine Lake, he said during an interview.

Meanwhile, Highway 2A, which runs north and south, is also a fairly major artery for motorists headed either north to Red Deer or south to Innisfail, he added.

On top of all the local and recreational flow of vehicles, he said there is also “a tremendous amount of truck traffic through that intersection.”

Asked what kind of approach he thinks would improve safety at the intersection, and what officials should do, he said, “It’s up to Alberta Transportation — they own the highways.”

Stop signs that were installed for east and westbound traffic on Highway 42 a few years ago do not seem to be an adequate solution, he said.

“They have to put some type of traffic control device in there.”

Whether that comes in the form of traffic lights or perhaps a traffic circle, which he’s heard has been discussed as a possibility, there should be more than just stop signs, he said.

“I’m not an engineer, and I’m not sure how well that works.”

In his experience serving with other departments in communities that had traffic circles introduced, Pendergast said the number of calls for collisions subsequently increased. But engineers in Alberta seem to have “a pretty strong affinity for traffic circles. Either way, it’s got to be better than what’s there,” he said.

“Right now, you have to stop at a stop sign, then try to go as fast as you can because there’s so much traffic that it’s hard to get through.”

With north and southbound traffic flowing unimpeded along Highway 2A, motorists attempting to cross on Highway 42 typically have a very narrow window of opportunity to get through, he said.

“Once they pull up and stop — and a lot of them are pulling trailers or whatever — then it’s hard to get across, because you have to wait like three or four minutes before there might be an opening,” he said.

So Pendergast implores people to be patient.

In a follow up inquiry submitted to Alberta Transportation, spokesperson Anna Neale said the stop signs already in place at the intersection are deemed adequate based on traffic counts and standards.

“While there are currently no plans for additional traffic control measures at this location, Alberta Transportation continues to work alongside local stakeholders such as the Town of Penhold to ensure Albertans can safely move around our province.”

Penhold moves closer to high speed internet
Aug 28, 2020 5:00 PM
Comments
We welcome your feedback and encourage you to share your thoughts. We ask that you be respectful of others and their points of view, refrain from personal attacks and stay on topic. To learn about our commenting policies and how we moderate, please read our Community Guidelines.