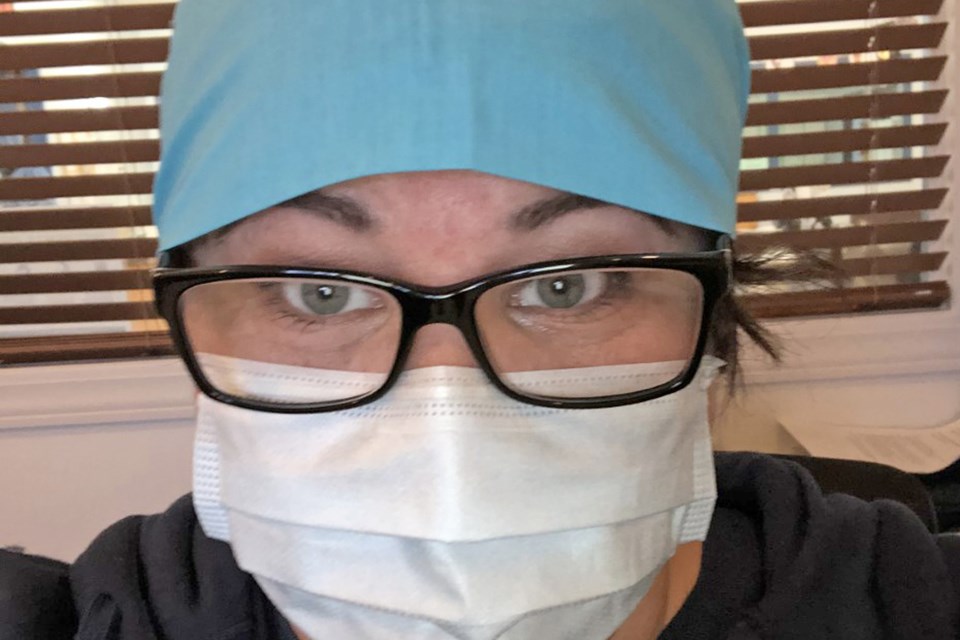 Penhold resident Tosha Giesbrecht, an RN who is a member of nursing faculty at Red Deer College and who started working at the Safe Harbour Society's detox facility when the pandemic started, is concerned that the extended lockdown will have a ripple effect on mental health that has not yet peaked.

PENHOLD - Although the first wave of the COVID-19 pandemic seems to be tapering off as the economy slowly reopens, a registered nurse from Penhold who works at a detox centre in Red Deer worries the impact on mental health has yet to reach its peak.

“I think it is only going to get worse with people being out of work and having to face stressful home life situations,” said Tosha Giesbrecht, a member of the nursing faculty at Red Deer College.

“I don’t think we’ve seen the peak of the damage of what the pandemic has caused, in relation to individuals’ mental health,” said Giesbrecht when reached by phone on Tuesday, May 26.

“During the pandemic, when you look at the magnitude of the devastation that’s happening within mental health, that’s not even come to a forefront yet,” she said.

“You have people who are in abusive relationships, who are now being forced to stay at home with their abuser, who’s maybe been laid off, who is now more stressed and maybe more abusive,” she continued.

“You have kids who loved going to school because it was a chance for them to get out of maybe an emotionally or physically abusive home, now are stuck at home. They don’t get to go and see those teachers or those friends, who were kind of their moment of freedom for the day.”

And the situation in society today, with an economy that was already struggling even before the pandemic is adding to people’s financial stress.

That isn’t about to remedy itself.

“I think we are going to see a big increase in problems with addictions,” she said.

When the pandemic was declared, the registered nurse, who teaches fourth year students and also earned her masters, said she was compelled to get more involved at the vanguard against the virus. She was welcomed with open arms at the Safe Harbour Society in Red Deer.

Giesbrecht said although Safe Harbour is typically a 20-bed, medically supervised detox facility, it established an isolated unit for people with COVID symptoms who sought to detox from either drugs or alcohol.

“I was hired specifically to work the isolation unit,” she said.

“We were mandated to set up an isolation unit for individuals that wanted to come in, or needed to come in, to detox, but were experiencing any COVID symptoms.”

So a six-bed unit was set up in a different area within the facility to allow physical distancing measures to keep people safe while allowing individuals to detox under the medical supervision of health-care professionals.

“There’s a group of us, we’re on call. When we have somebody that comes in that requires isolation due to symptoms that wants to detox, then we get called into go and work our shift and be present for them,” Giesbrecht said.

“With central Alberta’s numbers being as low as they are for COVID cases, I’m happy to say that we actually haven’t had a lot of people that have come in.”

While Safe Harbour’s regular detox wing has remained steady, numbers of individuals requiring isolation have been low, she said.

“In the time periods that I’ve been in there to work, we’ve never had patients overlapping.”

Once someone’s symptoms clear or that person tests negative for COVID-19, they can be then be moved back to the facility’s general population, she said.

Although she’s relieved the isolated detox unit has not been overwhelmed, Giesbrecht is glad it has nevertheless been used to help people.

“Safe Harbour Society is an amazing place to work,” she said.

“They really are inclusive, and the people that work there really do care about vulnerable populations.”

Most of the people they provide assistance to are vulnerable individuals, many of whom are homeless.

“(But) not everybody that comes into detox is homeless,” she said.

For example, it’s not uncommon for facilities like Safe Harbour to help people who have come in after working out on the rigs, seeking a last ditch hope to repair a faltering relationship frayed by substance abuse, she said, adding services are available to everyone.

Giesbrecht praised continued investment into mental health strategies in Alberta, where the provincial government has been willing to help provide supports for facilities such as Safe Harbour.

However, she stressed it's vital to ramp up efforts to open up the lines of communications and raise awareness in order to deconstruct harmful prejudices that many people hold towards addicts and the homeless.

“It needs to be more normalized so that people who need help aren’t ashamed to reach out for help.”

Mental health issues and addictions do not discriminate and anyone is susceptible, she said.

Unfortunately, she said there seems to be a lot of fear within the general population about vulnerable individuals or people who struggle with substance abuse.

“People just really want to be able to point their fingers and blame somebody for the crime, for all of the negative things that are happening in society. That’s not all necessarily happening at the hands of the vulnerable,” she said.

“Take off your rose coloured glasses. Yes, there are absolutely some situations where you need to be safe and cautious. But to just pigeon hole all of them into that same box, and to say that is the way that all vulnerable people and all homeless people are, really is unfair and unjust.”

Scapegoating safe consumption sites as hotbeds of criminal activity is not uncommon, but founded largely on misconceptions, she said.

Harm reduction strategies like safe sites are not just about reducing harm to addicts, but also the greater public at large, Giesbrecht said.

“It’s reducing potential harm to the kids that are out playing in a playground that might come across a dirty needle, or the businessman in downtown Red Deer or wherever, who might come out and see somebody who is shooting up in their entranceway because they don’t have a safe consumption site. Or who might have overdosed in the entrance,” she said.

“Is that person going to potentially cause physical harm to that store owner? Probably not. But think of the emotional harm of having to walk out and witness that.”

But people all too often cling to stereotypes against vulnerable people and assume every homeless person is out stealing and abusing substances, she said.

Ensuring that detox and recovery facilities as well as safe consumption sites continue to operate is a critical part of the equation, Giesbrecht said.

“It’s imperative — it needs to exist. If people, in general, in society want to see the ‘problem’ get better, than we need to provide services to help those that need it. If you remove the services, then we’re just doing more harm than good.”

People might also consider being mindful of refraining from sharing social media drinking challenges in consideration of those at risk of relapsing.

“It’s like setting up an AA meeting outside of a bar, you don’t do it!” she said.

“How damaging is that to somebody who has put in time and the effort and the restraint and has recovered, and now, everywhere they turn, it’s being thrown in their face.”

Giesbrecht said even people who only drank socially before the pandemic could, as a result of coping with isolation, become at risk of drinking more heavily.

Although talking about mental health and addiction is a difficult subject to broach during a conversation, these discussions are important, she said.

“I think if we were all to just kind of let our walls down a little bit and to really try and understand somebody else’s story and journey, there’s a lot less fear in that than what there needs to be and what there’s perceived to be.”

She encourages people not to be afraid to ask someone — from friends and family to a stranger who lives nearby — how they’re doing.

“Reach out to people. These aren’t normal times that we’re living in, and a lot of people are living in fear. But that fear can be very debilitating in a lot of ways. I think we just need to open up the lines of communications and not be afraid to ask the questions.”

Students are offered advice on approaching such a challenging conversation.

“Don’t be afraid to ask somebody, ‘Are you doing OK? Do you need some help? I might not have all the answers, I might not know what to do, but I can help you walk through it.’”

Penhold’s young finally have graduation date
Sep 19, 2020 10:00 AM
Comments
We welcome your feedback and encourage you to share your thoughts. We ask that you be respectful of others and their points of view, refrain from personal attacks and stay on topic. To learn about our commenting policies and how we moderate, please read our Community Guidelines.