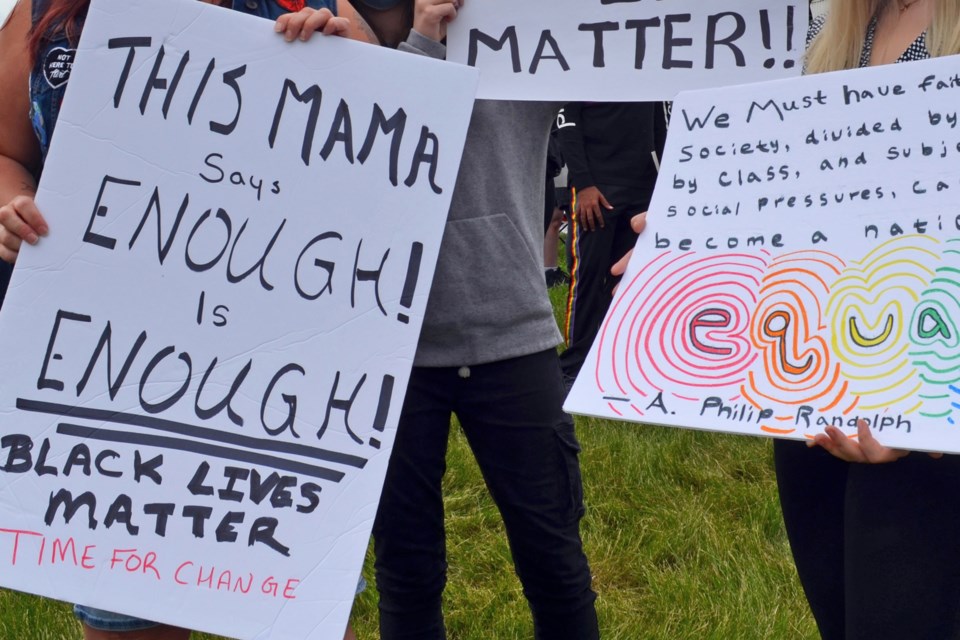 Black Lives Matter supporters show their signs during an anti-racism rally last June. A more recent rally in Red Deer has resulted in an assault charge against a Penhold man. File photo/MVP Staff
PENHOLD - A Penhold man is charged with assault in one of three separate criminal incidents police say happened at a Red Deer anti-racism rally that drew national attention for violence that broke out.
The Sept. 20 scheduled Red Deer Against Racism anti-racism demonstration drew counter-protesters.
“As demonstrators were setting up for the event and prior to RCMP arriving for their planned attendance, a disturbance occurred between two separate demonstration groups, resulting in one male allegedly assaulting another. This incident was caught on video prior to Red Deer RCMP members arriving on scene and was shown to officers by those on scene,” said RCMP Cpl. Deanna Fontaine.
Trevor Lyle Roy, 42, of Penhold, has been charged with assault in relation to the incident and is scheduled to attend Red Deer provincial court on Nov. 17.
Fontaine told The Albertan she could not provide details of the alleged assault because the matter is now before the courts.
She also declined to say whether the accused was part of a demonstration group.
Red Deer RCMP GIS have requested a summons charging an individual with assault with a weapon in relation to a second incident that occurred at the event which was captured on video and widely circulated on social media.
The incident occurred during the protest and RCMP members at the scene responded within seconds, Fontaine said.
“The parties were then separated and assistance was offered to the victim. Both parties were identified; however, due to the growing concern that tensions were escalating within the crowd, the parties were permitted to disperse.”
A third incident was uncovered by the RCMP investigation, was supported by video evidence and remains under investigation, Fontaine said.
“Until the summons has been issued by the courts and subsequently served, the name of the accused cannot be released. Once that information becomes available, an update will be issued,” she said last week.
Red Deer RCMP GIS continue to review video evidence in an effort to uncover any other criminal incidents that may have taken place at the Sept. 20 event.
Two days after the demonstration, Alberta Minister of Justice and Solicitor General Kaycee Madu held a press conference and issued a statement in response to reports of violence by counter-protesters.
“I have seen select clips of the protest in Red Deer on Sunday, Sept. 20, and I am admittedly disturbed. All Canadians have the right to peaceful protest and to freedom of expression. Those are fundamental rights,” he said.
Violence and threats of violence at peaceful protests are unacceptable, he added.
“I am confident that Albertans will overwhelmingly reject the behaviour seen on Sept. 20. And any time we have an incident like this, my hope is that the authorities get to the bottom of it. But more importantly, we must have the tools in place to ensure that peaceful protests do not become violent.”
- With files from Lea Smaldon