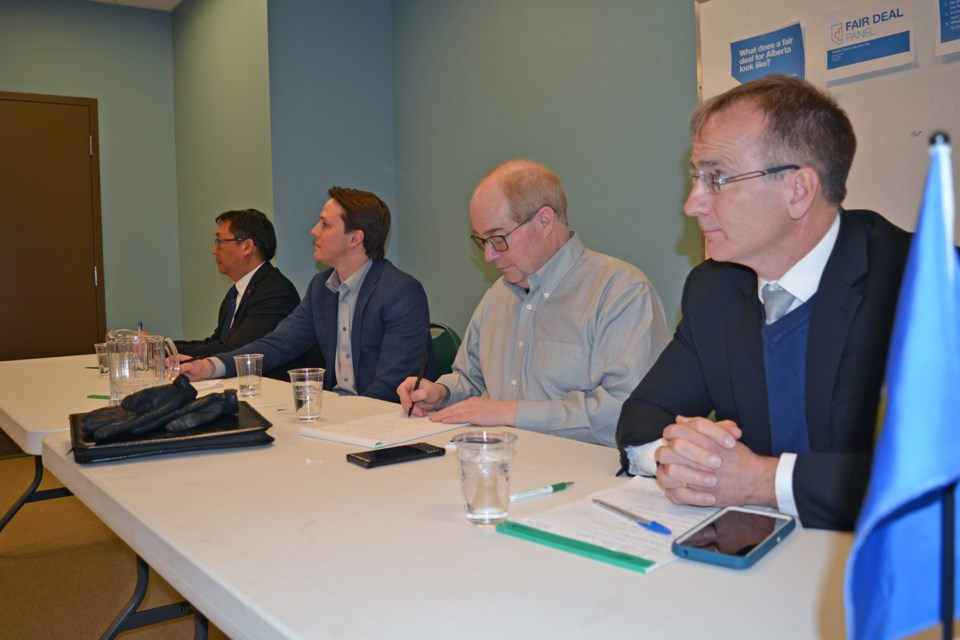 About 40 people from across the region came out to the meeting at the Penhold Regional Multiplex on Feb. 3.

The event was hosted by Devin Dreeshen, Innisfail-Sylvan Lake MLA and minister of agriculture and forestry. He is one of several MLAs organizing smaller scale meetings with the Fair Deal Panel, to gather input and feedback from local constituents.

The Fair Deal Panel toured several larger cities across Alberta in recent weeks, and wrapped up in Airdrie on Jan. 27.

Penhold’s panel heard emotional pleas from several citizens on a variety of topics, from Wexit and rural crime to the struggling economy and its devastating impact on families in Central Alberta.

“At the end of the day, the thoughts and ideas that central Albertans have here, we want to make sure that it’s in the panel recommendations.”

Red Deer's Brian Barritt  was one of many area residents who shared his story and concerns.

“I think we need to do similar to what Quebec has done and become a strength within Canada and be a force within Canada,” he added, noting he did not agree with the Wexit movement.

Seventeen-year-old Zachary Heywood of Red Deer County said he also wanted to hear what locals were saying about a fair deal for Alberta.

“Personally, I believe strongly in my province and that we should focus on doing what’s best for us and trying to help out the people who live directly around us in our local communities,” said Heywood.

Yao is an official member of the Fair Deal Panel that toured about a dozen cities across the province in recent weeks, including Red Deer, Lethbridge, Lloyminister, Fort McMurray and Grand Prairie. He joined Dreeshen in Penhold.

“It’s certainly a venue for people to vent their frustrations about what they perceive is unequal treatment amongst the provinces in Confederation,” said Yao. “We’re going to continue to do a lot of these (meetings) in the smaller communities over the next few weeks.”

He said the panel has heard comments on several areas during the tour.

“(There are) people who strongly believe in Confederation and don’t want anything to change. We have a group of people who are very frustrated with the way things have been in Confederation and want to separate,” said Yao. “In general though, the majority of the people that we’ve heard from thus far from my perspective are people that recognize and love this great nation that we call Canada. However, they do recognize that we are being treated differently.”

Comments and feedback gathered from the Fair Deal Panel meetings, including the one in Penhold, will be part of a report presented to Premier Jason Kenney by March 31.

“This (report) is just to give our provincial government an idea of where Albertans stand in regards to the whole issue around Confederation,” said Yao.