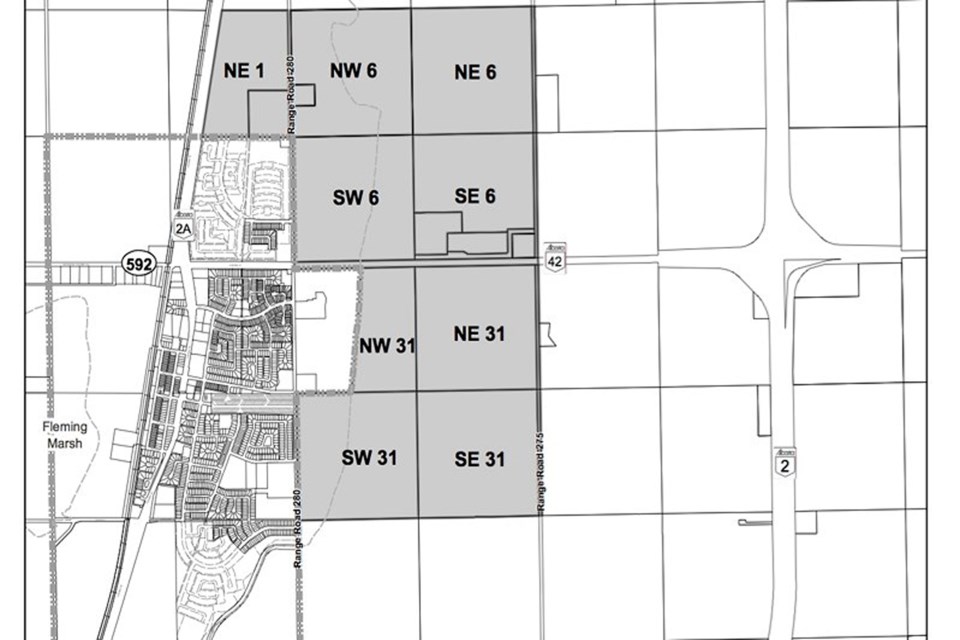 A map of more than 1,300 acres of lands (dark grey) the Town of Penhold annexed from Red Deer County in 2018. Penhold council was told on May 25 that industrial development has begun in the northeast corner and that the new Northeast Industrial Area Concept Plan has been launched. Map courtesy of the Town of Penhold

At Penhold council’s regular meeting on May 25, it was announced the town has launched the new Northeast Industrial Area Concept Plan for annexed lands located off Highway 42, and Rge. Rd. 275, adjacent to the highway interchange.

The concept plan identifies more than 400 acres of potential Industrial lands available for development, with land at the southeast corner now being cleared for a new industrial project, specifically a large head office for a welding and fabrication company. Council was also told a road on the 400 acres of land will be developed this summer for potential development in the near future.

The 400 acres of potential industrial lands is part of the 1,319 acres, located on the town’s north and east side, the Town of Penhold annexed in 2018 from Red Deer County. Most of the annexed lands in the northeast corner are earmarked for commercial and industrial uses, while residential development is being planned for the southeast portion, south of the Penhold Regional Multiplex.

Penhold mayor Mike Yargeau emphasized that while it was good news that development has begun in the newly annexed lands, the industrial area concept plan is just a “sketch” of the town’s intentions and has not even been put to the public for input.

“It gives us a framework as we build into the newly annexed plan as to how it is going to look. There is one development going in there now. The rest is just a long-term plan so far. We have no confirmed development yet,” said Yargeau. “We are basically planning for the future. It makes it easier for developers when they are coming in to look at it and see what we have available and what we have planned for that area.”

Annexing a significant portion of land from the county in 2018 was important for the town as it was experiencing a low supply of commercial and industrial lands, including only seven acres for future commercial development, and 320 for industrial. However, with many other Central Alberta communities now setting aside more and more lands for future industrial and commercial growth, Penhold is seeing more competition for tax revenues.

“I think it is what it is ultimately. We are in competition with Red Deer County, the City of Red Deer and Blackfalds,” said Yargeau. “We are all in the Central Alberta corridor, and we are looking to attract businesses that are looking to be in the corridor. We just have to make sure we are as competitive as we can be, and I know Innisfail feels the same.”