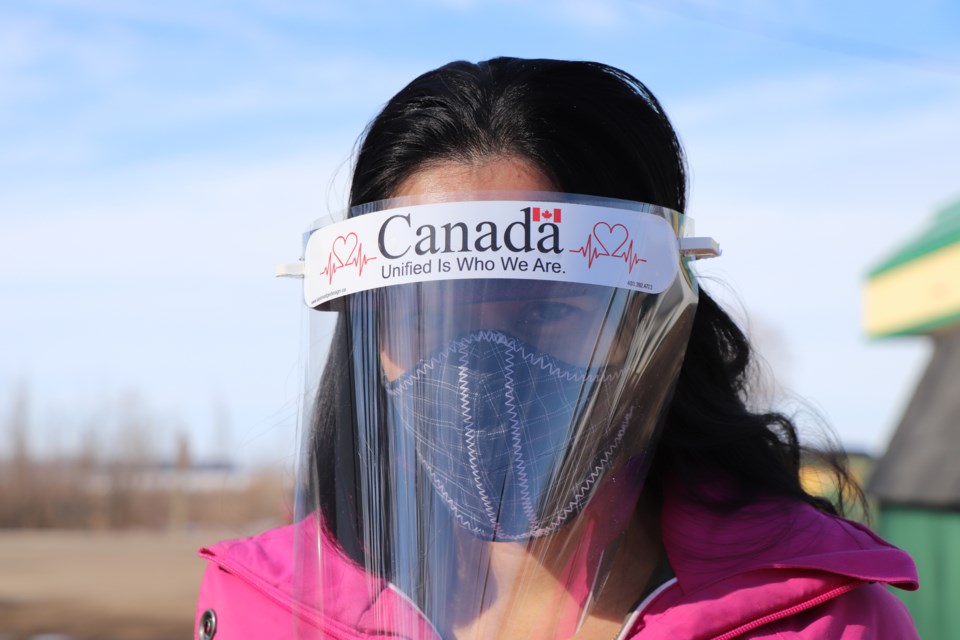 Grace Wazny wears a new face shield created by her husband Curtis at their Penhold business, Lasers Edge Design. The business is now producing thousands of units that will soon be shipped all over the country to help prevent COVID-19 infection. Johnnie Bachusky/MVP Staff

PENHOLD - Curtis Wazny can lay claim to being a super hero with a face shield created to save lives.

The 50-year-old Penhold entrepreneur does not have just one face shield but will soon have tens of thousands of them to hand over for countless Canadians coast-to-coast in the country’s epic battle against the COVID-19 pandemic.

“I have to keep this going or who else is going to do it?’’’ said Wazny, a Red Deer resident whose workplace is in Penhold.

He’s a custom woodworker by profession who has two shops in Penhold for his business, Lasers Edge Design, which typically features custom woodworking games, like cribbage boards.

But the current pandemic inspired a bold invention way beyond any game he’s ever created.

“I’ve seen this whole pandemic thing coming weeks ago. I thought, ‘OK, there is going to be a need for masks, obviously. I can’t make N95 masks. That is like a non-starter,” said Wazny, whose face shield concept was inspired by his mother, an emergency room nurse. “I’ve completely designed the whole thing from the bottom up.

“My first design was a disposable throw-away but it just turned out to be a little bit too flimsy, so I made one that was definitely going to stand up to whatever was thrown at it.”

What he claims to have created is a durable two-piece lightweight plastic face shield that is easy to assemble, can be used multiple times and easily sterilized or wiped down.

“It was designed essentially for anybody, if you have frontline staff serving people at a grocery store, an optometrist, whatever,” said Wazny. “The whole design was meant to keep any kind of spray away from your face, not a full proof thing but it’s an added layer of protection.”

So much so his invention has caught the attention of some very important people, including Premier Jason Kenney.

“Great work by Curtis Wazny and Lasers Edge Design out of (Penhold),” tweeted the premier on March 29. “When approved, they’ll be able to manufacture 5,000 face shields per day for our front-line workers.”

However, Wazny has not yet earned any regulatory approval from either the provincial or federal government for his product, which is now attracting many customers from across the country. He said multiple calls were made to both levels of government but no one returned them.

“If I waited on (the governments) I would be dead, so would everybody else,” said Wazny. “I thought about that (government approval) but realistically if the government is not going to approve something and they are approving everything else in Ontario and Quebec but in Alberta nobody has really contacted me or anything like that, we’ve just gone ahead with production. I am getting orders from everywhere.

“When this is all done ( the government) can come after me for whatever they want but right now I am trying to do my best to protect people that need protecting,” he added.

A call to the Alberta regional office of Health Canada to inquire about federal requirements for the sale of these types of products was redirected to the ministry’s medical devices department in Ottawa, which was not immediately returned for comment.

Nevertheless, Wazny is now in full production mode from his Penhold shop. Last week he told The Albertan he made 2,000 face shields in two days. He has orders coming from Newfoundland and Labrador, Vancouver, Fort McMurray, as well as one from a major grocery chain for 10,000 units, with at least one more for another 20,000.

It hasn’t been just a one-way stream of money coming in for Wazny. The entrepreneur said he’s personally invested $15,000 of his own money since the high demand began. He sells the masks for $5 each.

So how confident is Wazny about his invention protecting the public from the potentially deadly COVID-19 virus?

“Well, if the fire chief of Penhold comes in and orders 25, and if he thinks they will protect people I am sure they will,” said Wazny. “He came right into my shop. I guess he had heard the news stories. He just wanted to get some extra (protection) for his paramedics and some of his crew so I said, ‘yeah, no problem.”

Fire Chief Jim Pendergast confirmed to The Albertan he purchased the face shields. He noted Wazny’s invention will add another layer of protection for his firefighting crew.

Penhold mayor Mike Yargeau is aware of Wazny’s invention and said no town purchases have yet been made as all facilities are currently closed. However, he had high praise for Wazny’s creativity and entrepreneurship.

“I think it is amazing,” said Yargeau. “Between hand sanitizers and the masks, it shows that in Alberta and in Canada we can come up with these things that we need and can manufacturer them and be cost effective. There is a need for them for sure.”

Train whistles are staying in Penhold
Oct 6, 2020 5:00 PM
Comments
We welcome your feedback and encourage you to share your thoughts. We ask that you be respectful of others and their points of view, refrain from personal attacks and stay on topic. To learn about our commenting policies and how we moderate, please read our Community Guidelines.