Residents urged to wear and deliver poppies to businesses instead
Nov 1, 2020 6:00 AM By: Letter to the Editor 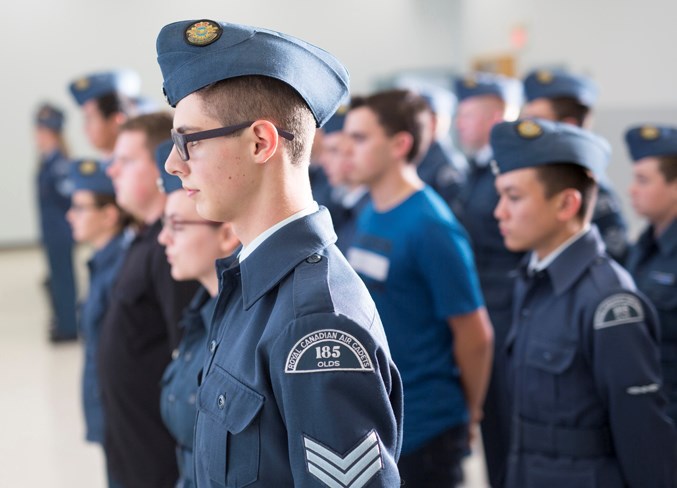 Members of the Royal Canadian Air Cadets Squadron 185 stand at attention for a review in recent years. File photo/MVP Staff

The 185 Olds Royal Canadian Air Cadet Squadron has had the privilege to support the Royal Canadian Legion Branch 105 in Olds with its Remembrance Day activities over the past decades.

Part of this has been the annual poppy blitz of Olds. The cadets of 185 Olds have gone door to door in Olds with legion poppy trays for so many years now that we cannot remember when it started.  All we can say for certain is that this tradition has been going on prior to the 1970s.

This has been a big kick-off to the poppy campaign for the legion in Olds.

This year, due to the restrictions that have been placed on the cadets for their safety due to COVID-19, the cadets are not able to take part in this local tradition.

It will be a very strange year for us as a squadron not being able to stand with the legion at this time of year to remember with them the sacrifices of war.

The cadets and officers of 185 would like to pass the torch of remembrance on to the citizens of Olds this year and ask that they step up in our absence.

The Royal Canadian Legion is an amazing community organization that has supported the community of Olds for many decades now.

It has been an active community group raising funds for our hospital, youth groups and many other community organizations.

It has provided the community with a facility that is available for various functions from weddings to elections.

The Royal Canadian Legion is also the visible reminder of the sacrifices that this community has made — both past and present — by those who have chosen to serve in uniform, whether it be in service to their country in the military or working as a first responder.

Please remember to support the legion during the 2020 poppy campaign.

Please remember to take the time to remember on Nov. 11 in any way that you find possible.

This year, the 185 Olds Royal Canadian Air Cadet Squadron will be remembering quietly in the sidelines.

Let’s follow the example of our youth and support the Royal Canadian Legion Branch 105 in Olds in 2020.

You can support our legion branch by volunteering with them to deliver poppy trays to local businesses, donating to the poppy campaign, helping out with their weekly bingos or inquiring about becoming a member.

Of course, you can visibly support them by wearing a poppy.