Red Deer recently lost one of its most dynamic citizens. Dr. Sadie Lampard, a dedicated community volunteer and philanthropist, who was also the first certified woman optometrist to practice in Alberta, passed away on Aug. 1, 2010.
Nov 5, 2010 1:00 AM By: Great West Media 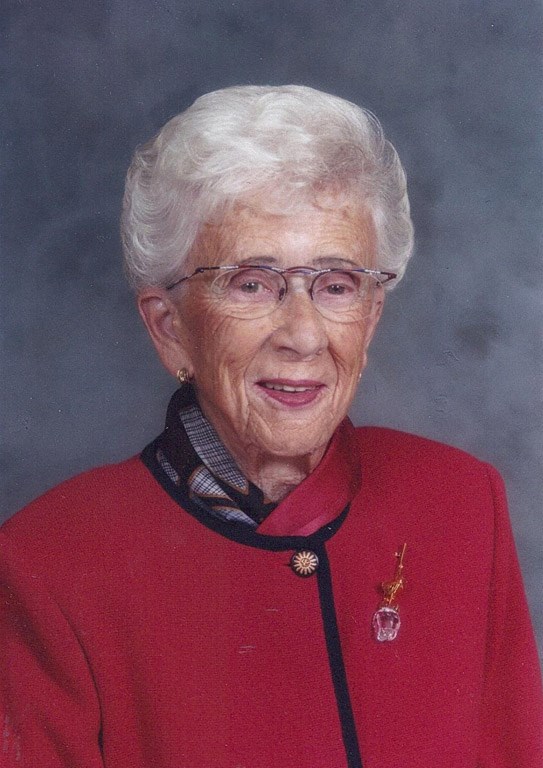 Red Deer recently lost one of its most dynamic citizens.

Dr. Sadie Lampard, a dedicated community volunteer and philanthropist, who was also the first certified woman optometrist to practice in Alberta, passed away on Aug. 1, 2010.

Sadie Marion Leslie was born in Weyburn, Saskatchewan on August 7, 1916, the only daughter of Robert and Martha Cross Leslie. Her parents were both school teachers, but her father became a Presbyterian minister and later served as the speaker of the Saskatchewan Legislature.

The Leslies were strong believers in education. Hence, Sadie graduated from Weyburn Collegiate in 1933, followed by a year at Brandon College. She then attended the School of Optometry in Toronto, graduating at the top of her class in 1936.

Sadie practiced in Toronto and then Winnipeg, where she met another young optometrist, James Alfred Lampard. They were married on Oct. 1, 1939 in Trossachs, Saskatchewan.

The couple then moved to Red Deer in October of 1940 where Jim secured a position in the Eaton's optical department. Sadie's arrival was a dramatic one. She had just settled into her room in the Buffalo Hotel when she went into labour. The next morning, Sadie gave birth to identical twins, Doug and Bob.

Fortunately things worked out. However, with funds being scarce and a wartime housing shortage, the only house that the Lampards could initially find was an old one in very poor repair. The house was often so frigid that one only went to use the bathroom when absolutely necessary.

A new and much better home was finally located on 56 St. With Jim going off to serve in the Royal Canadian Artillery, Sadie went to work in the optical department at Eaton's. Shortly thereafter, the Lampards decided to start their own independent optometric practice. However, for quite some time, it was Sadie who both ran the office and took care of the twins.

In 1945, Jim returned from the War. A new home was built on the eastern brow of Michener Hill. Both Jim and Sadie became very active in community affairs. The family also continued to grow with the additions of Toby, Bill and Tom.

The list of Sadie's accomplishments is an impressive one. As president of the Kinettes, she became the very energetic chief organizer of the Red Cross blood donor clinics. By the early 1950s, the Red Deer clinics became the largest in Western Canada and the second largest in the country.

In 1950, she was acclaimed as the secretary-treasurer of the new Scout-Guide Association. Although raised a Presbyterian, she became very active in the Anglican Church, first at St. Luke's and then at the newly formed St. Leonard's On The Hill. She was particularly active with the youth groups and various fundraisers, including the annual Christmas mincemeat project. She later became the first woman member of the St. Leonard's church vestry.

She was active as a parent volunteer with a number of youth sports programs, particularly competitive swimming. She was very athletic herself and was a provincial champion curler, avid golfer, hiker, skater and cross-country skier.

Despite all of her activities, she also found time to frequently help her sons with their extensive paper routes that covered much of the East Hill. She also continued to be an active member of the optometric practice.

Over the years, she received a number of awards and honours including the Percy Hermant Award (1936), lifetime membership in the Alberta Association of Optometrists (1994), Beta Sigma Phi Woman of the Year (1990), Canada 125 Medal (1992), Soroptimist Centennial Silent Angel Award (2005), and Rotary Paul Harris Fellow.

The greatest legacy of Dr. Sadie Lampard is the healthy volunteer community in Red Deer that she helped create and which she so generously supported. She truly made Red Deer a much better place to live.

Letter: It appears witch hunt underway when it comes to Innisfail's Glen Carritt
Apr 10, 2021 6:00 AM