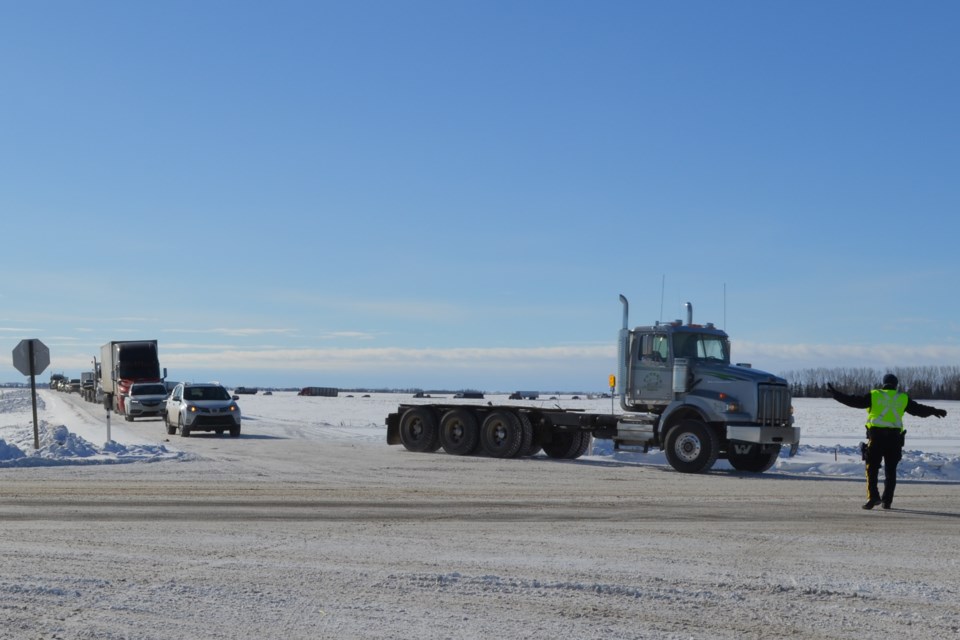 A police officer directs diverted traffic at the intersection of Rge. Rd. 10 and Highway 27 after a single vehicle rollover forced the closure of northbound lanes on Highway 2 between Olds and Didsbury this morning (Feb. 17). Doug Collie/MVP Staff

Editor's note: This article has been updated with the latest information from RCMP.

OLDS - STARS air ambulance was dispatched to what RCMP are calling a serious single vehicle rollover this morning (Feb. 17) that closed both northbound lanes of Highway 2 between Didsbury and Olds for several hours.

In an update issued at about 2 p.m. Wednesday afternoon, RCMP Cpl. Tammy Keibel said both northbound lanes of the highway had been reopened.

One northbound lane of traffic had earlier been reopened, however there were significant traffic delays and motorists were requested to use an alternate route.

Innisfail Integrated Traffic Unit, along with other emergency responders including Olds Fire Department responded to the rollover.

STARS also attended the scene of the rollover on Highway 2, approximately two kilometres south of the Highway 27 overpass, Keibel said in a release.

The corporal said preliminary investigation indicates that at about 9:12 a.m. this morning, an SUV that was southbound on the highway lost control and rolled over landing in the northbound lane.

Traffic was being diverted northbound at the Didsbury overpass at Highway 582.

Motorists are still being asked to avoid the area and use an alternate route.

“Emergency crews are expected to remain on scene for at least the next two hours. Motorists are asked to slow down in the area, be aware of emergency personnel and drive to the conditions. Ice on the roadway and blowing snow may impact driving conditions,” Keibel said in an update issued at about 11:15 a.m.

At about 9:30 a.m., 511 Alberta told travellers to stay left when travelling northbound on the highway just south of Olds to avoid the collision and to also expect delays.

A 511 Alberta update issued at about 9:50 a.m. said the highway's northbound lanes were closed due to the collision and that a local detour was in place.

The Olds Fire Department issued an advisory around the same time saying Highway 2 northbound between Didsbury and Olds had been closed.