A special Grizzlys game in Myrl Goddard's memory is planned for this fall when the season re-starts
Jun 5, 2021 3:00 PM By: Doug Collie 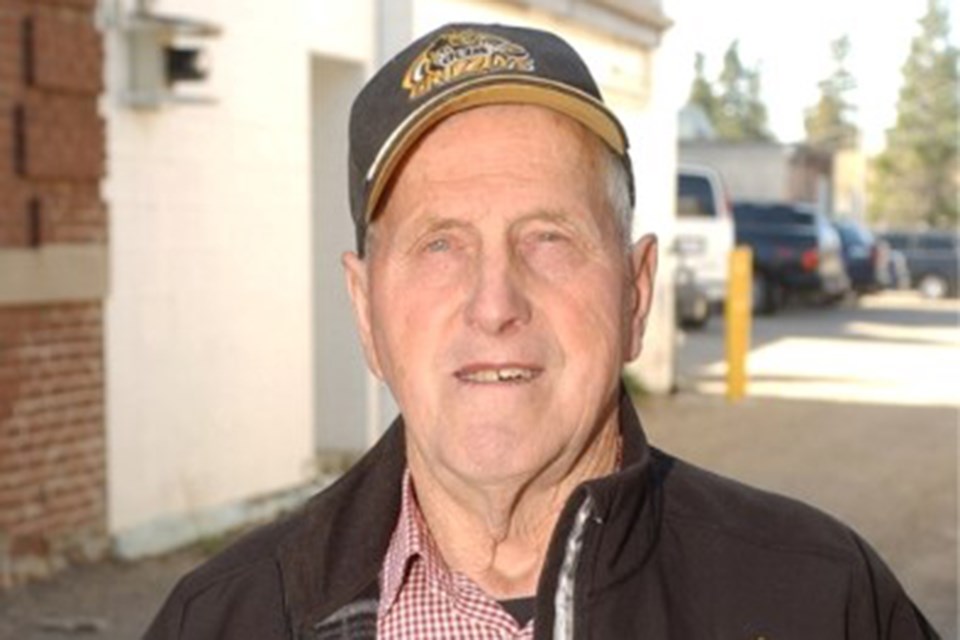 Mryl Goddard recieved the Bob Hill Memorial Builders Award during the 2012-2013 Grizzlys' annual awards banquet in recognition for all the fundraising and other support he provided to the Junior A hockey team. File photo/MVP Staff

OLDS — Olds has lost one of its most passionate hockey fans and historians.

Mryl Goddard passed away May 14 at the age 94. A gathering to celebrate his life will be held at a later date.

Goddard lived in Olds nearly his whole life. His family moved to the community in 1936.

Goddard loved cars and history, but hockey was a major passion.

When he was young, he’d play shinny on a slough wearing Eaton's catalogues as padding.

From the 1940s through the 1960s, Goddard and his brother rented out a public address system so he could be an announcer during hockey games like those played by the Dirty Dozen and the Olds Elks.

When the Grizzlys junior A hockey franchise moved to Olds in the early 1980s, Goddard became one of the team’s strongest supporters and perhaps its greatest fundraiser.

"He would go around town and do his thing and we all knew he would sell the most tickets out of all of us,” says Cindy Tookey, another longtime Grizzlys supporter.

“He was an avid supporter. I mean when you stopped and saw him on the street, he’d chat hockey with you for at least 25 minutes,” she said.

“He was very hockey. He would eat, sleep and breathe that stuff, hockey,” she added with a laugh.

“I'm a hockey nut for probably 70 years,” Goddard said during an interview.

“I'm still crazy (about hockey) and will be until they take me out of the house feet first.”

He built shelves for the Grizzlys office, souvenir and ticket booths, shadow boxes for jerseys and of course, the knotty pine picture frames that are sold each year, with some of the proceeds donated to the Grizzlys.

Tookey says she has several of those shadow boxes in her basement.

As a result of all his efforts, Goddard was presented with a Bob Hill Memorial Builders Award during the 2012-2013 Grizzlys' annual awards banquet.

Olds Grizzlys business manager Gary Gaudette plans to organize a special game to honour Goddard’s memory when the season starts up again in the fall.

He’s looking at raising a banner, as was done for former Grizzlys general manager and longtime supporter Bob Clarke after he passed away.

A love for hockey was only one way Goddard contributed to the community.

In 1966, he created a ski hill from scratch on the Perry Fox farm property at Rice's Coulee just south of Highway 27, complete with a diesel-powered towline and two groomed runs.

Unfortunately, there was never enough snow at the site to make a go of it so the hill was closed after just a couple of seasons.

Another story about Goddard is literally electrifying.

In 1924, his father’s brand new shoes were hit and scorched by lightning during a thunderstorm.

When he saw the storm coming, Goddard’s dad, Floyd made sure the horses and everyone else was safe. Then, seeing that nothing more could be done, he laid down on the coach. A tall man, his legs hung over the edge of that couch.

“I guess dad figured he didn't have nothing else to do so he just laid down on this couch and the couch wasn't long enough for him. And I guess he no more than got down on it with his legs hanging over the end of the couch when the old lightning snapped before you could say holy smoke," Goddard said during an interview.

He said that lightning bolt blew dishes out of the cupboards, killed the family dog outside and charred nails in the walls.

Because Floyd was wearing a brand new pair of shoes with metal tacks in them, the lightning slammed into his legs and heels.  "In those days, the heels were tacked on, they weren't glued on like they are nowadays," Myrl said during an interview. "The lightning actually attracted those nails. It drove the charge through his heels. It left them looking like grape jelly."

Decades later, Goddard still had those shoes -- two tattered pieces of leather missing parts of their soles -- and showed them during an interview with The Albertan.

Former mayor Judy Dahl encountered Goddard many times over the years. She has fond memories of him.

“Mr. Goddard was a very proud citizen of the place we all call home: Olds, and he wanted only the best for the town of Olds,” she wrote in an email.

“Often Myrl would ask ‘Why are they doing this?’ ‘What for?’ and his final comment would close with ‘It better be for the right reason.’

“I genuinely respected that about him.”