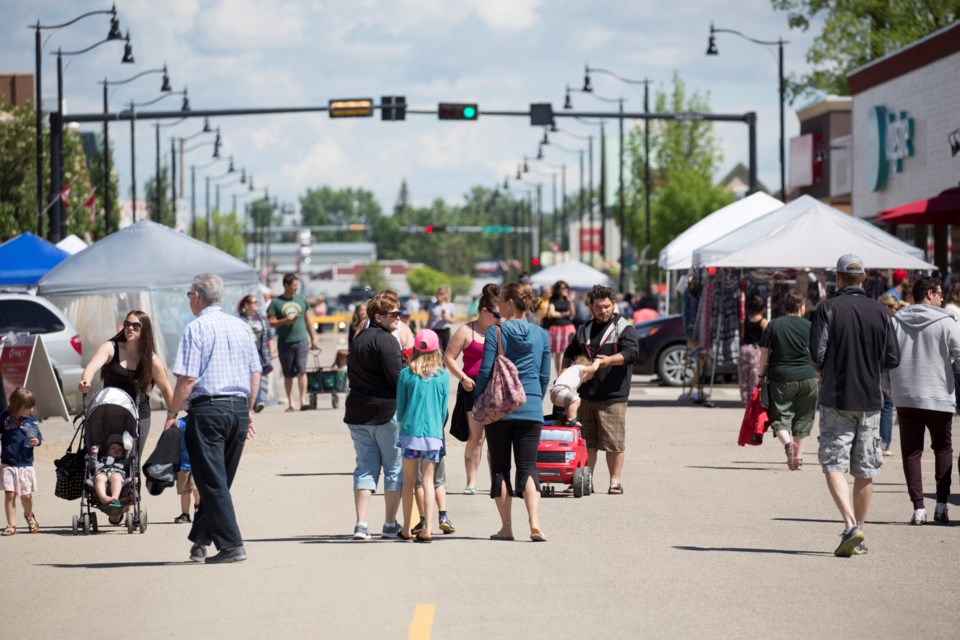 The vendors' market along 50th Avenue was bustling during the Oldstice event in 2019. The 2020 event has been cancelled. File photo/MVP Staff

OLDS — Summer Oldstice is another casualty of the COVID-19 pandemic.

The one-day summer celebration and shopping event, organized by the Uptowne Olds committee (UOC), is normally held in late June.

UOC chair Leon Durand said the committee held out as long as it could – for weeks -- but finally conceded in late April that there was no choice but to shelve it for this year.

It is the first time the event has ever been cancelled, as far as Durand knows.

He said the committee is still thinking of having some kind of uptown shopping promotion later this year but it’s uncertain if – or when – that might happen, and if it does, what kind of promotion it might be.

“We have to wait until of course, the stores are able to be open, right? So once the Alberta government starts to open things up we’ll look and see what we can do,” Durand said.

He said that new promotion would have to be something fairly easy to set up in a short period of time.

Ideas floated so far include a sidewalk sale or a scavenger hunt.

Meanwhile, organizers are busy letting all the various vendors and entertainers they had booked for Summer Oldstice know about the decision and offering them refunds.

However, “it’s prudent to cancel it. It’s just the right thing to do, under the circumstances,” he said.

“We’re going to do what we can to nail this COVID thing and get it out of our hair. This is what’s a necessary evil.”

Olds air cadet awards to be presented virtually
May 28, 2020 1:00 PM
Comments
We welcome your feedback and encourage you to share your thoughts. We ask that you be respectful of others and their points of view, refrain from personal attacks and stay on topic. To learn about our commenting policies and how we moderate, please read our Community Guidelines.