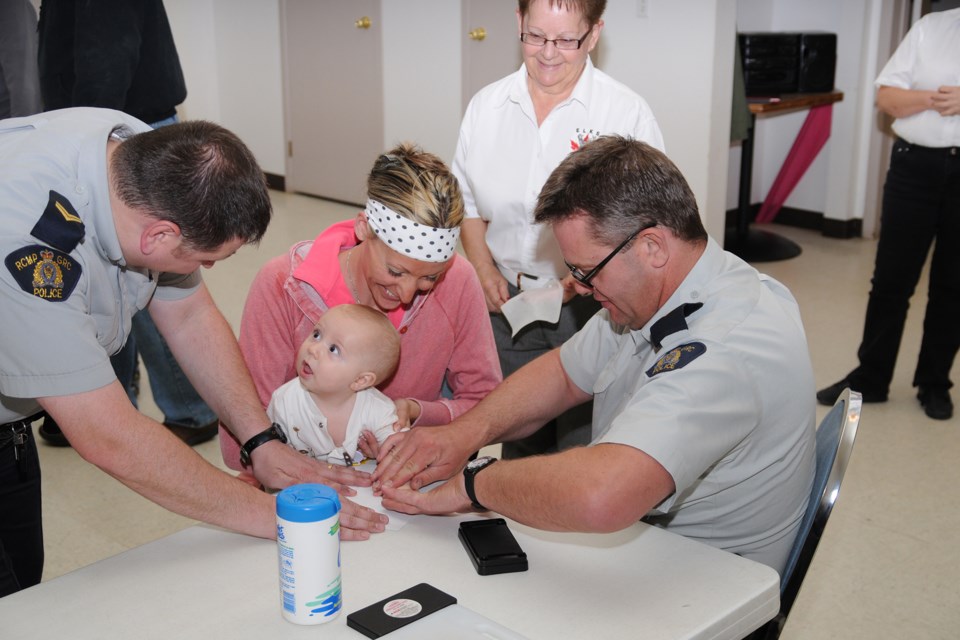 In this 2013 photo, then Didsbury RCMP Cpl. Warren Wright, right, and then Didsbury RCMP Cpl. Clint Gulash, left, fingerprint baby Tayt Fisher, while mother Cori Mercier holds him, while Margo Ward, rear, watches on during a child identification clinic. Wright is on his way back to the area, to become commanding officer of the Olds detachment. File photo/MVP Staff

After a six-and-half-year absence, he will be moving back to his hometown of Olds this summer to become commander of Olds RCMP.

Wright will replace Staff Sgt. Jim MacDonald, who officially retired in March after a 25-year career, including three years as commander in Olds.

After MacDonald retired, Sgt. Jody Achtymichuk of Sundre RCMP filled in as interim commander of the Olds detachment.

Wright lived in Olds and was transferred out of Didsbury in 2015.

He is currently the commanding officer of the High Prairie and Faust RCMP detachment, a post he has served since 2017.

His transfer was confirmed on April 13.

“I am originally from Olds. After living and working away in northwestern Alberta for the past six-and-a-half years, it was time to return home and be closer to family,” Wright wrote in an email.

“Olds is very magnetic for me as I have moved away from Olds several times before, but I always seem to make my way back.”

Wright was asked if commanding the Olds detachment with its approximately 15 officers (when at full strength) will be a challenge for him.

“Actually, High Prairie is largest detachment that I have commanded so far, with 26 regular members and seven support staff," he wrote.

“High Prairie is a very busy northern provincial detachment which is responsible for a very large geographical area, including four indigenous communities.

“I am aware that Olds and area will offer its own unique set of challenges for me. However, I am completely up for it.”

Wright is aware that a lot of the crime that occurs in Mountain View County comes from criminals coming down Highway 2 from elsewhere.

He noted Olds RCMP work with other RCMP detachments, provincial sheriffs and others to deal with crime as well as speeding and collisions in the area.

“It’s all about working in partnership with these units towards improving traffic safety and reducing criminal activity on Highway 2,” he wrote.

Wright has been an RCMP officer for 28 years.

During his career, Wright has been posted in a couple of communities in Saskatchewan as well as places across Alberta, from Didsbury and Sundre to Lac La Biche and Fox Creek; including a stint in Calgary.

He’s seen a lot of changes over that time.

“When I started in 1993, we were issued with only a revolver, handcuffs and a baton. We wore forage caps in the summer and fur hats in the winter," he wrote. “We still had one royal blue and white police car with cherries on top in our fleet before they were all replaced with the current white vehicles.

“I also used a typewriter with carbon paper to complete forms and reports in duplicate. We had 25 per cent of the paperwork we do today, so I was able to spend the vast majority of my time out of the office and on the road.

“Over the years I’ve seen a slow modernization of equipment and uniform, as now we have carbines, external vest carriers and ball caps and toques.

“We also have way more paperwork and reporting than we’ve ever had in our history, which makes it a real challenge to every day to improve efficiency and maximize time out in the community.”

Wright said he sees policing as a way to “make the community a safer place to live for others.”