About 150 people filled the lobby and other rooms in Mount View Lodge last week for the official opening of Rotary Gardens, a green space in the middle of the Olds seniors' facility.
Jun 27, 2017 1:00 AM By: Doug Collie 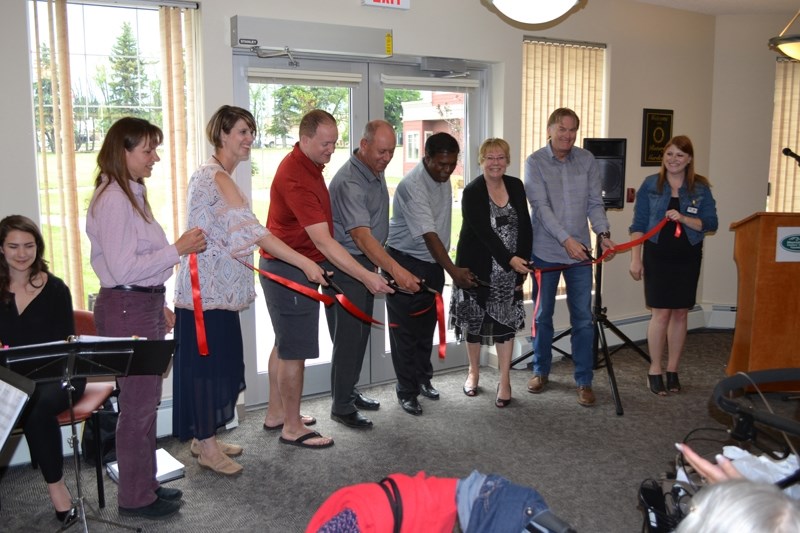 About 150 people filled the lobby and other rooms in Mount View Lodge last week for the official opening of Rotary Gardens, a green space in the middle of the Olds seniors' facility.

Construction of phases 1 and 2 of the gardens included a patio and pathways, lawn, raised gardens, a gazebo, memorial trees, and a memorial bench. That's what was officially opened last week. Celebrations were moved indoors, due to rain.

The total cost of that project is pegged at $92,500. Of that figure, $30,000 came from the Rotary Club of Olds. The Mount View Lodge Ladies Tuck shop contributed $3,300 and $26,870 came from an estate. A provincial government grant covered the rest of the cost.

Phase 3, expected to be completed over the next several years, involves getting more trees and gardens planted. The total cost of that segment is not yet known, according to Mountain View Seniors' Housing (MVSH) executive director Ralene McCullough.

During the grand opening, held June 21, McCullough, MVSH chief administrative officer Sam Smalldon and MVSH Foundation president Paul Gustafson (also a member of the Rotary Club of Olds) thanked the club for its donation toward the project.

They also thanked representatives of the estate of a former resident which helped make creation of the gazebo as well as other aspects of the gardens possible.

Gustafson and Smalldon also noted the first of several memorial benches envisioned for the area is now in place. It memorializes Linda Schafer, a longtime employee who served as the lodge's first chief cook and dietician.

A ribbon was cut to officially open the gardens.

ìThe courtyard here was part of the original plan (when the lodge was designed more than seven years ago),î Smalldon said.

ìAs you may or may not know, we don't receive funding for furniture and equipment or things like that and we've received great community support from the town of Olds community groups.

ìAnd the Rotary has been top-notch in donating funds to this project to allow us to have the sidewalks, the grass, and to have places for the raised gardens and the gazebo and the benches.î

Smalldon said the gardens provide seniors living in the facility with a way to exercise and thereby keep healthy, which is part of the MVSH philosophy.

ìI always tell people that working with seniors, I only have one requirement and I know that we're doing good when I make a senior smile,î he said.

ìOur club is really proud of the fact that any fundraising we do, we give right back to the community, 100 per cent, and we give it back to worthy causes like the Rotary Gardens,î he said.

ìAs I have noted, we can't do that without community support. That's all of you and as I've said, a lot of other people in the community. I hope you really enjoy it. We're very pleased to be part of this.î

Also during the event, McCullough received a plaque from Alberta Seniors Communities and Housing Association vice-president James Nibourg congratulating the MVSH Foundation on the opening of the gardens.

"I always tell people that working with seniors, I only have one requirement and I know that we're doing good when I make a senior smile." SAM SMALLDONCHIEF ADMINISTRATIVE OFFICER MOUNTAIN VIEW SENIORS' HOUSING