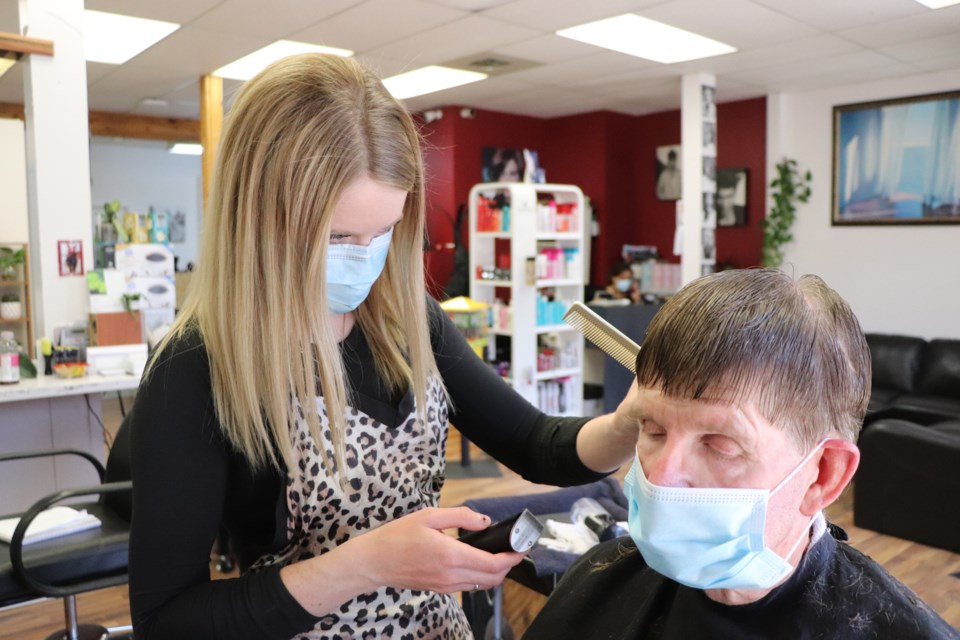 Kellsy Rodger, a hair stylist at Nulook Hair Salon in Olds, gives Stewart Graham a clip on May 14 on COVID-19 relaunch day for hair salons. The public health crisis forced the closure of all provincial hair salons last March, with the local business shutting its doors on March 20. Johnnie Bachusky/MVP Staff

OLDS - The region’s economy continues to relaunch from the COVID-19 shutdown after the provincial government gave the go-ahead for many businesses to partially reopen for walk-ins for the first time last week since closures were ordered in March.

With heightened infection prevention and control measures to minimize the risk of increased transmission of infections, some businesses and facilities were permitted by the provincial government to resume operations on May 14 in all areas except the cities of Calgary and Brooks in the first of the three-phase relaunch.

Museums and art galleries can reopen, day cares and day camps can reopen with occupancy limits, and restrictions are easing on places of worship and funeral services as long as they follow the province’s sector-specific guidelines.

Barley’s Pub in Carstairs has been closed since end of day on March 16.

May 19 marks “The day we got Barley’s back” announced its owner when heralding today’s dine-in reopening.

The dine-in area at Centre Street Pizza Carstairs was also expected to reopen on May 19. Patrons area asked to make resevations to mitigate risk.

“We’re back!," Jensen’s Men’s Wear owners Mike and Lindsay Fix announced the day before their May 14 reopening.

Clothing retailers like Jensen’s, its next door neighbour Gotcha Jeans and Bear’s Den in Sundre opened on Day 1 of  the first phase of relaunch.

So did gift and jewelery stores in the area including George T. Ingham and Son Jewellers Ltd. in Innisfail.

NuLook Hair Salon in Olds and Didsbury’s House of Hair were among the many hairdressers to also reopen their shops on May 14.

While Mr. Mikes in Olds was among some area restaurants to reopen dining on that day, others are taking a wait-and-see approach.

Alex Galanis, owner of  Grouchy Daddy’s in Olds is one of them. The restaurant won’t be reopening for dine-in anytime soon.

“Some might say I’m worrying too much, but if we can’t go to the hardware store to buy a can of paint without a sheet of plastic between the cashier and myself, and without the debit machine being wrapped in a new piece of plastic wrap after every use, I just don’t feel that it’s the right time to put our service staff tableside picking up your used cutlery, cups, plates, etc.,” Galanis said in his announcement detailing why he won’t be reopening dine-in service right away.

Outbreaks in Calgary and Brooks have delayed certain business reopenings in those communities until May 25 and June 1.

The Sundre area has had one case that is now recovered.

The Innisfail area has had one case listed as revovered.

Progression to Stage 2 of the economic relaunch  will be determined by the success of Stage 1, considering health-care system capacity, hospitalization and intensive care unit cases, and infection rates.

Services offered by some allied health disciplines like acupuncture and massage therapy would also be considered.

Plans afoot in Olds to thwart thieves
Sep 24, 2020 12:00 PM
Comments
We welcome your feedback and encourage you to share your thoughts. We ask that you be respectful of others and their points of view, refrain from personal attacks and stay on topic. To learn about our commenting policies and how we moderate, please read our Community Guidelines.