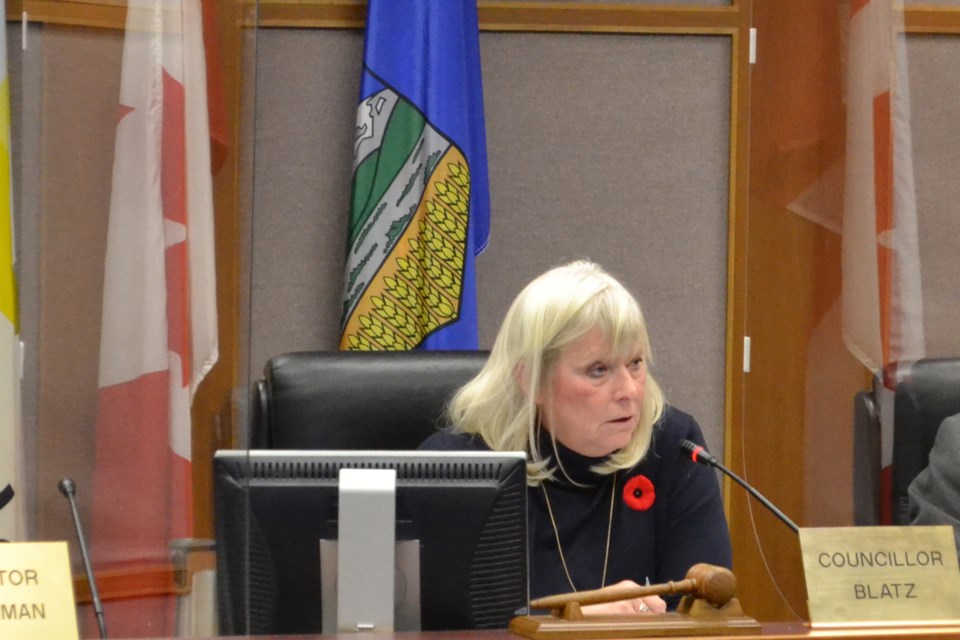 During a regular council meeting, Town of Olds Coun. Wanda Blatz spearheaded a call for the town to paint poppies in crosswalks. Doug Collie/MVP Staff

OLDS — Coun. Wanda Blatz would like to see poppies painted in crosswalks, especially along Memorial Way near Deer Meadow School, as a tribute to veterans.

In an email, chief administrative officer Michael Merritt said that idea will be “added to our service level review for 2021.”

During council’s Nov. 9 meeting, Blatz said poppy designs have been inlaid in crosswalks in other communities. She’d like to see Olds follow suit.

“They’ve started incorporating the poppy and I would think that, because we have Memorial Way, that might be something very nice to look at," Blatz said, although she added she wasn’t certain what the cost would be for that project.

She thought the Deer Meadow School area would be one good place for the project in order to bring home the importance of remembrance to youth.

“We really want our youth to remember -- the symbolism of Nov. 11,” Blatz said.

"That’s an excellent idea," he said. “I think the further we get away from these major conflicts, it’s harder to actually get out there and remember, so it’s important we bring our youth into that conversation.

“Hopefully they’ll remember and not have to go through some of the things that our previous generations had to go through.”

Blatz noted that Remembrance Day ceremonies this year – including the No Stone Left Alone observances -- have been different, due to the COVID-19 pandemic.

She also pointed out that Nov. 5-11 was National Veterans Week.

“In order to commemorate our veterans and everything they’ve done to keep our country safe, I think we commemorate all those past and present who fight and have fought for our country and for our freedom,” Blatz said.

"I think that we need to recognize the Indigenous Canadians who have fought and given their lives, because more than 12,000 Indigenous people volunteered in World War I, World War II and the Korean War," she said.

“We appreciate all the veterans out there – past and present – who gave their time to protect our country and the freedoms that we enjoy,” said Ryan.

Coun. Debbie Bennett noted that the Royal Canadian Legion Branch 105 did conduct a brief service on Remembrance Day at the cenotaph in Centennial Park.