Legion experimenting with opening Wednesday nights for bingo
Aug 6, 2020 11:00 AM By: Doug Collie 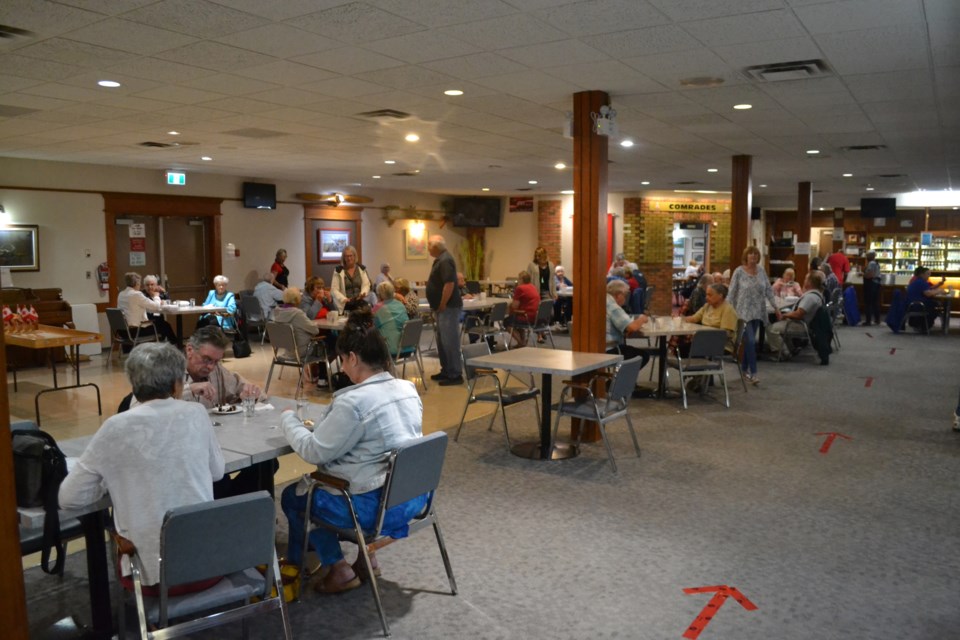 In order to comply with COVID-19 restrictions, the Olds Royal Canadian Legion had to change its buffet to a dinner and institute a rule that people can't go to the bar to obtain service. That has worked well, president Tom Bartholow says. Doug Collie/MVP Staff

OLDS — Some branches of the Royal Canadian Legion across the country are in financial trouble after having had to shut down for months due to the COVID-19 pandemic.

But the Olds Branch No.105 is doing surprisingly well, according to president Tom Bartholow.

As lockdown restrictions began to be eased, the Olds branch tentatively opened for portions of the morning and evening on Fridays and Saturdays.

That proved so successful that starting July 8, the branch decided to open Wednesday nights for bingo for as well.

“I’m surprised at what we’ve done and how well it’s gone,” he said during an interview.

Bartholow said they’ll run bingos Wednesday nights for a couple of weeks and then evaluate that move as well. If it works, they may continue Wednesday night bingos for weeks to come.

The key is the response from the public to the facility opening on Fridays and Saturdays, he said.

“The weekends were busy – Friday and Saturday, so we’re really happy with it. So we’ll see what happens with bingo and go from there,” he said.

In order to comply with COVID restrictions, the Olds Royal Canadian Legion had to change its buffet to a dinner and institute a rule that people can’t go to the bar to obtain service, he said, noting that has worked well.

They have lots of face masks which waiters and waitresses are required to wear.

The legion has had some issues with volunteers who are looking at volunteering to work the bingos but don’t want to “put themselves in harm’s way," he said, noting that's been dealt with too.

Bingo volunteers are being asked to wear face masks, and if they don’t want to do that, they have to sit behind plexiglass shields that have been set up.

In the weeks leading up to the first tentative reopenings, officials at the Olds branch were concerned about its finances, especially given the requirement for people to keep at least six feet away from each other, he said, noting that meant cutting back to half of capacity.

The branch has some guaranteed investment certificates and an arrangement with the bank that it could fall back on in order to stay afloat, if absolutely necessary, he said.

Suicide prevention conference postponed to November
Sep 26, 2020 9:00 AM
Comments
We welcome your feedback and encourage you to share your thoughts. We ask that you be respectful of others and their points of view, refrain from personal attacks and stay on topic. To learn about our commenting policies and how we moderate, please read our Community Guidelines.