Olds Rotary may have another donated vehicle for Mexico 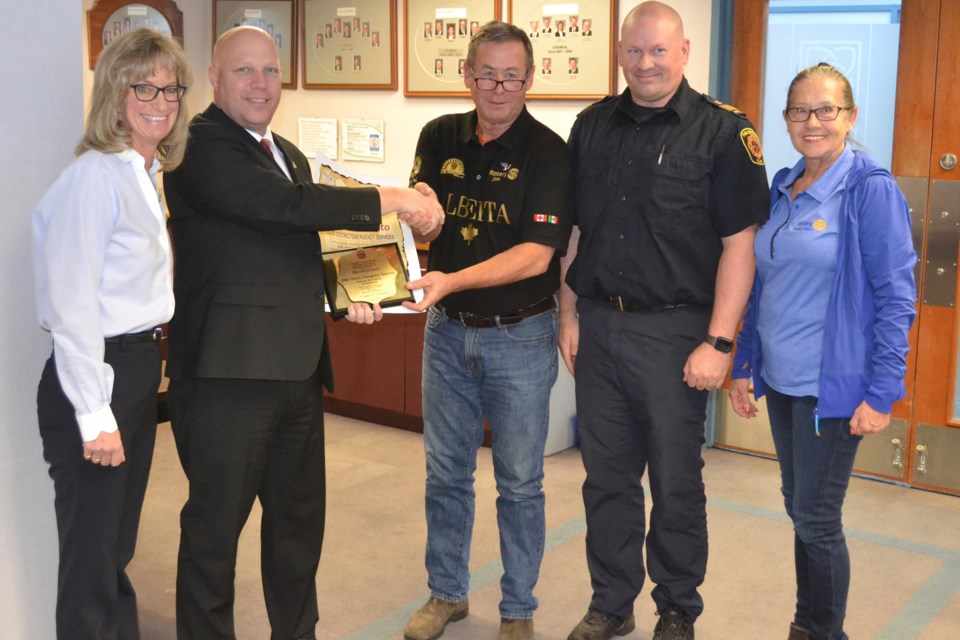 OLDS — Members of the Rotary Club of Olds may soon have yet another town service vehicle they can drive down to Mexico for use by emergency crews there.

Olds councillors told a Rotary Club delegation that an old Sunshine Bus that has been designated for auction might be available.

Three of those club members — Jim Crawford, Mary Turner and Barb McIvor — gave a presentation on that trip to an Olds council policies and priorities meeting in December.

A fourth member of that group, Debby Crawford, did not attend.

The Olds Rotary Club members were among a group of Rotarians from across southern Alberta that drove six service vehicles to Mexico.

It was the ninth year of the project and the second year in a row that members of the Olds club have participated.

Jim Crawford told councillors the vehicles are much needed and gratefully accepted by the Mexicans.

“They drive by you, they honk, they give you the thumbs-up, they clap, they want to take your picture,” he said.

He said they take very good care of all the vehicles they receive.

Crawford said the Olds vehicle had lots of signs or stickers denoting where it came from.

He said the equipment and uniforms are badly needed.

“A city of 800,000 people, Mazatlan, has one paid fire official, and that’s their fire chief. He looks after four fire stations,” Crawford said.

“Everybody else is a total volunteer. They buy their own uniforms, they pay for whatever they have to for the job.”

He reiterated that equipment sent down by fire officials here — including a hydraulic cutter-spreader combo unit and a hydraulic ram — saved three lives shortly after arriving there.

“They are getting donations so they can put fuel in their fire truck,” he said.

Crawford said the fire truck will get good use.

“People will just, if they have extra construction material, instead of hauling it away, they just light it on fire. It burns and then it burns the neighbours’, so it’s very handy to have.”

Members of the delegation made a small presentation to Mayor Mike Muzychka as fire Chief Justin Andrew looked on.

Mary Turner said the club would love to drive another vehicle down if the town had one available.

She was told an old Sunshine Bus was available. It was slated to be auctioned off.

Council voted to ask administration to work with members of the Rotary Club to make the vehicle available to them.

“I want to say thank you very much to the Olds Rotary Club and all the southern district Rotary clubs for all the wonderful work that they’ve done for this project to send vehicles down to Mexico and other countries,” Coun. Mary Jane Harper said.

“Anybody who travels to that part of the world knows how desperate the emergency service personnel are for equipment.

“Most of them don’t even have uniforms or turnout gear, so we really appreciate the fact that you guys have done all this work.”

Firefighters respond to Sunrise Village fire call
May 26, 2020 6:00 AM
Comments
We welcome your feedback and encourage you to share your thoughts. We ask that you be respectful of others and their points of view, refrain from personal attacks and stay on topic. To learn about our commenting policies and how we moderate, please read our Community Guidelines.