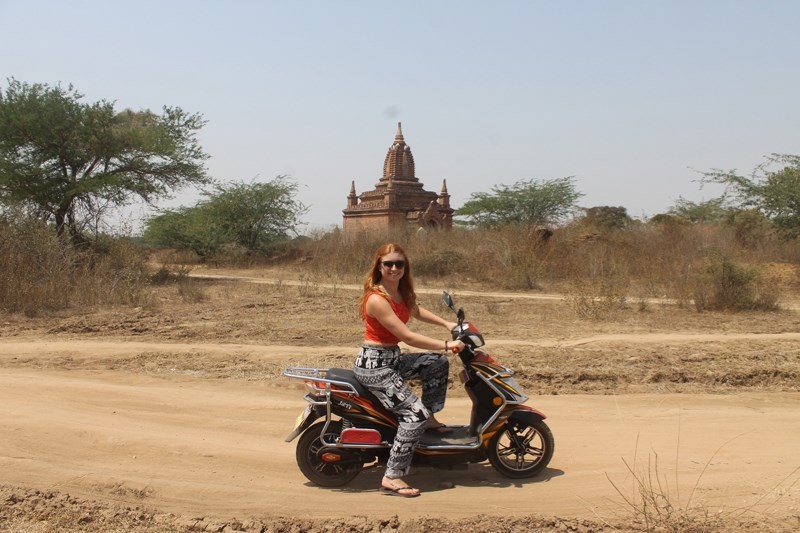 Ashley Anderson gives a big smile during a trip to Myanmar. Anderson is journeying to Africa in January to take on an internship in rural Tanzania.

It's a long, long way from Olds to rural Tanzania.

Ashley Anderson, 22, will be heading to the East African country in early January for an internship working with a non-profit project called Mama na Mtoto (which means mother and child in Kiswahili) and with Agriteam Canada.

"The ultimate goal is to increase mother and child health and to decrease infant and maternal mortality rates," Anderson said, adding that the group also provides basic medical care to others where it's able.

In Anderson's case she is going through the University of Calgary, where she majors in political science and minors in communications, and the internship is through Agriteam.

Anderson's internship is in communications. She'll help show where and how donors' dollars are being spent. She'll write, take video and photos as well as help update websites and social media with the stories of those who are helping, and those who are being helped, putting human faces on statistics.

"When there's just numbers on the page, that doesn't really mean anything," she said. "I'll be travelling around, kind of throughout the region, to the different hospitals and (health) centres there."

She has been a frequent flyer at the university's study abroad office. She's gone on exchanges to Sweden and Singapore, taking advantage of her time in those locations to travel extensively through Europe and Asia.

"This is my third January in a row where I'll be getting on a plane and moving to a completely different continent," she said.

This time she went looking for an international internship, and this program was suggested to her. The scholarship program's tagline is "a global education for a global generation."

"I didn't realize how big of a deal it was," she said. But she got the interviews, including one that came complete with warnings about the realities of life in rural Tanzania, like times without electricity or hot water.

"After that I was so excited, but I also thought ëO my goodness, I'm never going to qualify for this,'" she said.

After being told she'd hear by the end of October, she had to wait till 8 p.m. on Halloween to get the good news.

Anderson admits she's nervous about living for more than five months in a rural area of Africa. Even though she's a seasoned traveller, she knows this is likely to be an experience unlike anything else she's experienced.

"I think living in rural Tanzania is definitely going to open my eyes to a lot of things and be quite an adjustment," she said. "I'm trying to prepare myself and educate myself as much as I can before I go, while still recognizing that there's really no amount of preparation that's really going to prepare me for the things that I'm going to be doing and seeing over there."

Growing up in Olds, she became fascinated with maps and would pick out distant countries while playing with her grandparents. Combine that travel bug with her interest in journalism, communications and developing countries, and it makes for an exciting opportunity for her. "Travel is something I've always wanted to do," she said.

Anderson is also going to be updating a personal website during her time in Tanzania. Those curious to follow along with her adventures can check out callyouwhenigetthere.com.

"This is my third January in a row where I'll be getting on a plane and moving to a completely different continent."ASHLEY ANDERSON

Emergency ops centre to shut down July 14
Jul 6, 2020 9:00 AM
Comments
We welcome your feedback and encourage you to share your thoughts. We ask that you be respectful of others and their points of view, refrain from personal attacks and stay on topic. To learn about our commenting policies and how we moderate, please read our Community Guidelines.