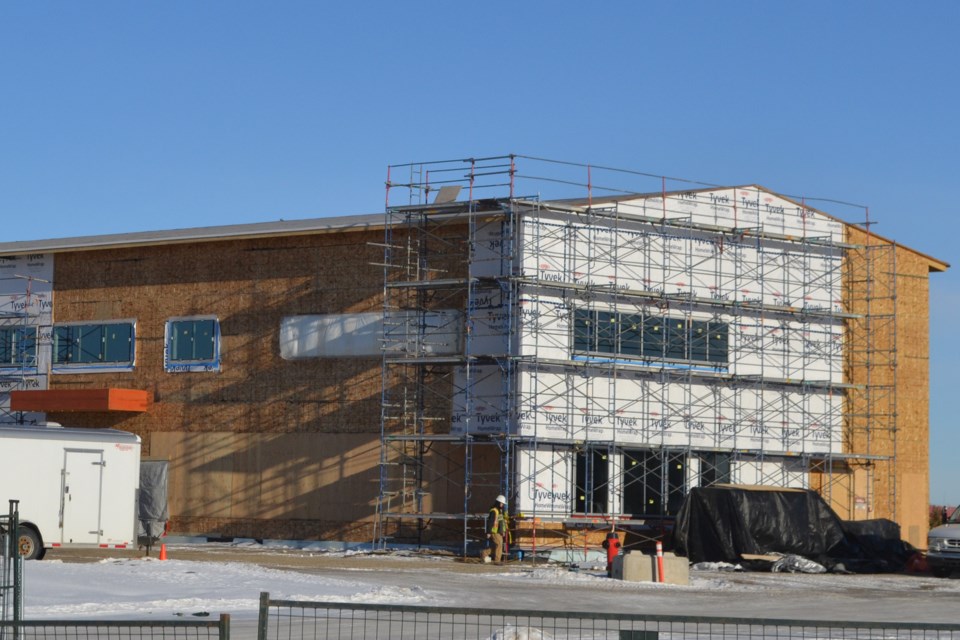 Olds town council passed a bylaw to increase the town's debt limit so it could borrow over $10 million to help cover construction costs of the Operations Centre pictured here. Doug Collie/MVP Staff

OLDS — Mayor Mike Muzycka is defending the Town of Olds' debt level and council's decision a couple of years ago to successfully apply to the province to have its debt limit increased.

Muzychka defended the town's debt level during a year-end interview, saying $18 million of that debt is incurred by O-NET, the town’s locally-owned phone, TV and internet service, which he considers to be an $18 million asset.”

He said an announcement on the town’s debt is expected to be made later this month.

“It’s a complicated situation but we pretty much have it figured out and we should have, mid to late January, an announcement on how that’s all going to shake out,” Muzcyhka said.

The town applied to have its debt ceiling hiked so it could obtain debentures to help cover the cost of building its new Operations Centre, currently under construction along 70th Avenue, just north of the Rotary Athletic Park.

As of Dec. 31 2018, the town’s regulated debt limit was $35,027,291. After receiving provincial approval, council passed a bylaw to increase its debt limit so it could borrow $10,734,023 to help cover construction costs for the Operations Centre.

In a 2019 email, town officials confirmed that borrowing would put the town over its debt limit by $1.7 million, but said the town would be “back within our regulated limit by 2021.”

Muzychka said O-NET-related debt on the town’s books is $18 million. That includes $14 million for two loans plus another $4 million for a line of credit.

Muzychka was asked if he’s worried about the size of the town’s debt.

“No, not at all,” he said. “What a lot of people don’t realize is yes, it looks like we’re up against our debt (limit).

“But $18 million of that, if you think about it, is an investment. It’s not debt. So you know, take that away and call it the investment that it is.”

“Our debt is very manageable,” he added.

“Everybody was sort of baffled that we were able to get the debenture for the Ops Centre," Muzychka said.

“But what happened was is Municipal Affairs took a look at everything and said, ‘well yes, there’s $18 million owing in debt, but there’s an $18 million asset that’s generating enough money to pay the payments on that debt.

“It's not coming out of taxpayers’ money at this point. So that’s why they don’t really consider that a debt.

“So they approved us for the Ops Centre, even though we went slightly over what would really be considered our debt (limit). It’s really quite convoluted,” he added with a laugh.

Muzychka said currently, O-NET is actually under the wing of the Olds Institute (OI). The town is a founding member of that entity.

An announcement on the future of OI is expected to be made later this month.