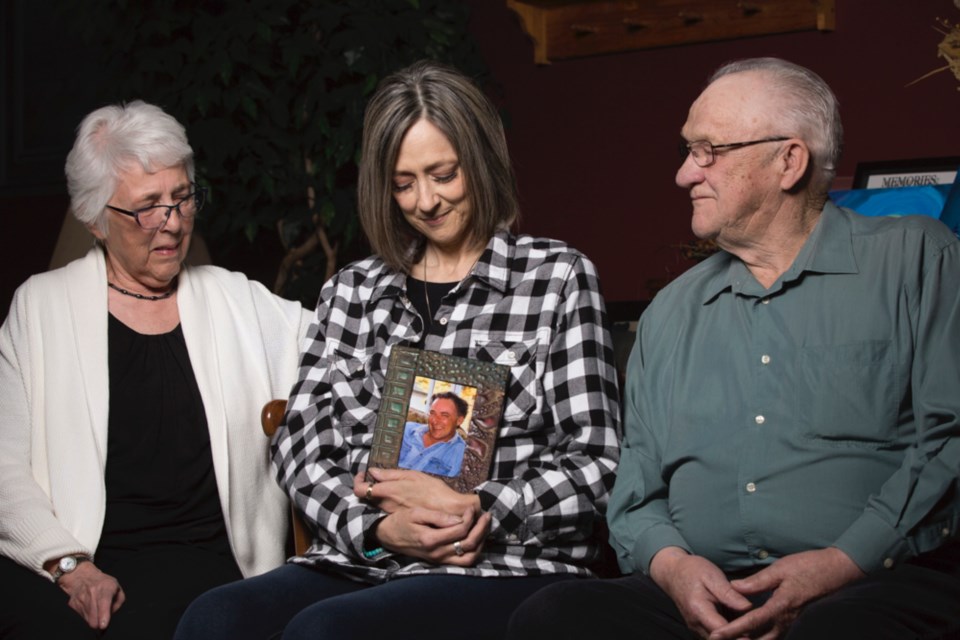 In this 2019 photo, Jennifer Lynch, flanked by her parents Betty and Bob Evans, holds a photo of her brother who died in 2015. File photo/MVP Staff

OLDS — A local resident who had a liver transplant a few years ago is pleased with a decision by Hildebrand Motors to promote organ donations.

On April 7, three local residents who have received organ donations will be in front of the dealership from 10 a.m. to 1 p.m., encouraging residents to sign forms so they can be registered at Olds Registries to donate their organs.

Also, Hildebrand Motors will donate $100 for every vehicle sold in April to Second Chance at Life Trail Ride Society. The society subsidizes places for people to stay while they’re awaiting or recovering from organ transplant operations.

Jennifer Lynch had a liver transplant in April 2018 after an illness dating back to about 2003.

“My kidneys were shutting down and things,” she said during an interview.

“It saved my life. It absolutely, unequivocally saved my life,” she added. I don’t think any of us realized how sick I was up until that day.”

And that’s not the family’s only connection to organ donation.

On May 8, 2015, Randy Evans, 54, son of Bob and Betty Evans of Olds, was murdered in Edmonton during the attempted robbery of his truck and trailer.

After consultation with doctors, the family agreed to have his organs donated because Randy had earlier indicated that that's what he wanted, should he pass away.

“I love it,” Lynch said when asked what she thought of Hildebrand Motors’ decision.

“People have religious reasons and personal reasons for not wanting to be donors.

“But my feeling is that the majority of people who don’t end up being donors, it’s just something that they don’t think about, so any light that can be shed on how important it is I think we’ve got to go for it,” she added.

According to the Canadian Transplant Association, almost 90 per cent of Canadians say they support organ donation, but only 23 per cent have actually registered their intent to donate. About 250 Canadians die each year while waiting for an organ transplant.

Under current rules in Alberta, if you want to donate your organs you’re asked to discuss that desire with your family so they’re aware of it.

If you’re over 18, you can go online to the Alberta Organ and Tissue Donation Registry to record your choices about organ and/or tissue donation.

Another option is to register at a registry office to make your wishes known, or you can sign the back of your health care card if it was issued before 2018.

If you want to be a living donor, contact a Living Donor Program representative.

Lynch would like to see the provincial government go further and adopt a law like one passed in Nova Scotia on Jan. 18.

Under that law, people who don’t register to be a donor or opt out but are eligible will be deemed to have consented to donating their organs and tissues after death.

Initially after her transplant operation, Lynch was recovering well. Then, a few weeks later, she had a hemorrhagic stroke. As a result, she stayed in hospital in

Edmonton for five months and can no longer work. That’s a great disappointment for her.

“But as far as my liver goes, as far as the transplant goes, I’m doing beautifully. I go and get my bloodwork every week,” Lynch said.

She noted she has a “sideways connection” with Hildebrand Motors. Her mother-in-law, who has since passed away, worked there for many years.