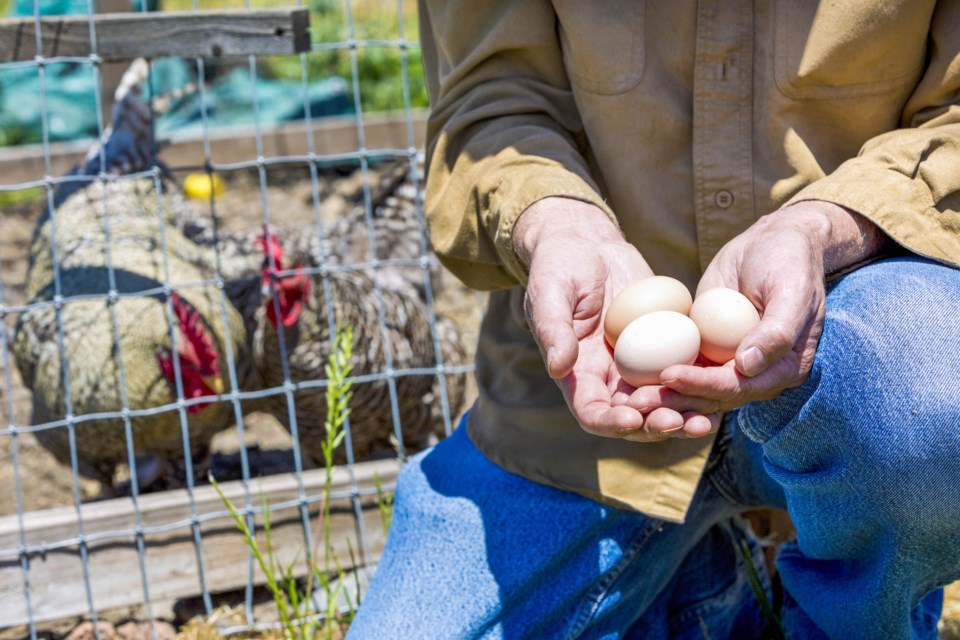 People keeping hens in town are only allowed to sell eggs obtained from those hens. They're not allowed to sell manure, meat or other products derived from urban hens. File photo

OLDS — Town council has approved both bylaws that govern the raising of chickens in town.

The two bylaws were passed during council’s April 26 meeting. They cover changes to the town’s land use and community standards bylaws.

In the case of the land use bylaw, two amendments were approved.

One amendment approved by council “grandfathers” existing chicken coops, giving owners of those coops until Jan. 1, 2023 to conform to the bylaw’s rules for chicken coops.

It also says any new chicken coops constructed after April 27 this year (the day after the bylaw was approved) must meet the rules outlined in the bylaw.

Another amendment requires the development officer to let adjacent landowners know if a neighbour has applied to raise chickens so they can make comments on that application.

That notice must be sent out at least 14 days before the town’s municipal planning commission (MPC) meets to make a decision on that application.

The notice must include the date of the meeting so adjacent landowners can submit written comments and/or attend the meeting. All such comments must be presented to the MPC for consideration.

Four changes were made to the town’s community standards bylaw to cover the raising of chickens in town.

In order to obtain a licence to raise chickens in the community, applicants must take a course on chicken raising and the town must be satisfied they have done so. They must also obtain an Alberta Premises Identification Program (PID) number.

The maximum number of urban chicken-raising licences has been set at 40 (one for every 250 people living in Olds).

Coun. Mary Jane Harper thought that was too many. She proposed a motion to cut that figure to one for every 500 people living in Olds. But that motion was defeated.

“Let’s not let the barn door open way too soon or too long. It is a living document. If we find that one per 500 is not enough, there’s opportunities for people to be on a waiting list or make changes to the document later on,” Harper said.

She noted Michael Merritt, the town's chief administrative officer, had indicated more changes may be made to the bylaw in the future anyway.

“I think we took a pretty strong straw poll at the time last meeting when we did this and I think council was quite clear in their direction,” Town of Olds Mayor Michael Muzychka said.

She noted during earlier discussion on the bylaws on April 12, councillors were of the understanding there are already about 20 chicken coops in town so a one-in-250 limit wouldn’t provide much opportunity for new chicken-raisers.

If that's the case, “what would be the point of our entire exercise,” she asked.

Coun. Wanda Blatz wanted to make sure the town’s municipal enforcement officers had had a hand in crafting the chicken-raising rules so that they’ll be able to enforce them.

“I have reviewed the amendment and feel that it is enforceable at this time,” senior community peace officer Sgt. Eric Christensen said.

"I’m quite happy the consultation was there and Sgt. Christensen was involved right from the get-go, simply for that reason, because it was not a headache that I wanted to see us have to come back to afterwards as well, so I’m happy,” said Justin Andrew, director of protective services.

Blatz said the town's community standards bylaw is becoming “quite big and complicated.”

"Maybe we’re going to have to break out some of it into another bylaw at some time,” she said.

That’s a prediction that has been made in the past as well.