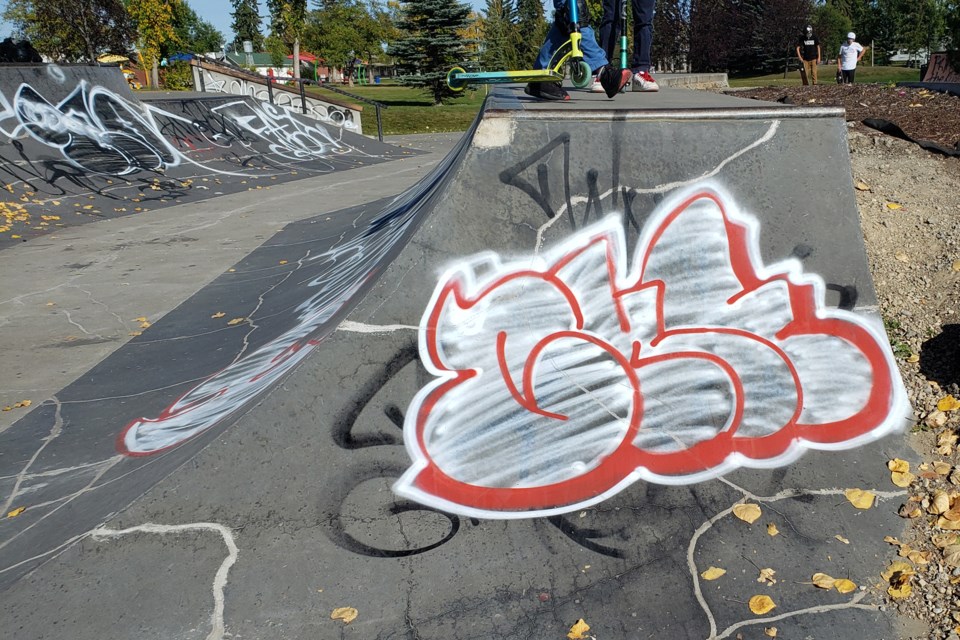 The Olds Skatepark was one of the places in Olds hit by graffiti Sept. 18 and Sept. 23. Submitted photo

OLDS — A suspect is due in court next month in connection with the spraying of graffiti in several locations in Olds.

RCMP say Che Dwight Kjorsvik-Osterhout, 36, was arrested after police received a tip Sept. 24 that a suspect connected to the graffiti was in a business in Olds.

In late September, Olds RCMP said a male suspect was believed to be responsible for spray-painted graffiti reported at The Blue Yak, Uptown Vape Shop, Horizon School, Olds Skatepark, Cornerstone, and a tractor-trailer parked on 50th Avenue at 51st Street.

Police charged Kjorsvik-Osterhout with mischief under $5,000 in connection with the incidents which occurred between Sept. 18 and Sept. 23.

Kjorsvik-Osterhout was released on an undertaking to appear in Didsbury provincial court on Nov. 9 with the following conditions.

He must not go to the skatepark or Centennial Park, The Blue Yak, Uptown Vape, the Cornerstone Plaza, the Olds Exhibition Grounds, Olds Liquor and Beer Store and Fas Gas, all of which are located in Olds.

He must also not possess any type of paint, spray paint or markers.

"RCMP are thankful for tips from the public that led to the identification and arrest of the accused.” Olds RCMP Cpl. Courtney Harding said in a news release.