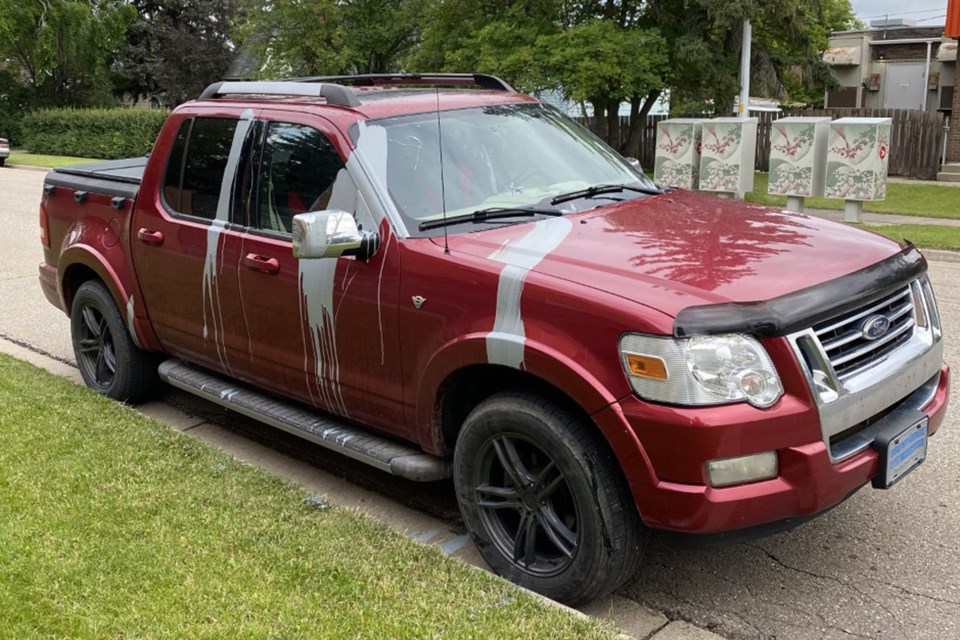 A look at Tom McCullough's truck with paint splashed on it. Submitted photo

OLDS — The Alberta Recycling Management Authority (ARMA) has presented a local couple with $300 to cover the cost they incurred after one or more vandals threw old paint onto their truck.

That vandalism occurred to Tom McCullough’s pickup the night of July 18 while the town was undertaking a pilot recycling program in conjunction with ARMA.

ARMA chief executive officer Ed Gugenheimer presented the cheque in a package along with a card and a couple of other items Aug. 12 while in Olds for a meeting with town officials regarding the recycling program.

The McCulloughs were surprised and grateful. They didn’t need or expect anything like this.

Just after the incident occurred, they told the Albertan about it. But that was to warn other people that this could happen if paint to be recycled is left outside overnight. They were not wanting or expecting to be reimbursed.

“I tried to say no, that was not the point,” Donna said during an interview. “We covered it. It was done. I said we’re not a charity case, we weren’t looking for sympathy.”

However, she said the couple is grateful for the presentation.

Donna said ARMA reps told her the presentation was being made to show thanks for the couple stressing positive ways the program could be improved rather than simply complaining about what happened to them.

“Our goal was to protect our community. Tom’s lived his whole life here,” she said. “We didn’t want this to happen to other people.

"t was great that the company wanted to do that. It’s showing that people care.”

Gugenheimer said the main reason he went to see the McCulloughs was to apologize for the paint vandalism and get feedback from them on how to improve the program.

As far as he was concerned, presenting the cheque and card was the right thing to do, he said.

“I didn’t want them to be out of pocket,” he said. “I think that’s only fair. I mean, it’s unfortunate what happened to them, so I just wanted to go there and apologize.”

He got the feedback too. It was suggested that if paint hasn’t been collected by a certain hour it should be taken back inside a dwelling.

Gugenheimer was also told that the McCulloughs thought the opportunity to recycle tires was a good idea.

Donna said despite all the efforts to get all the paint off, some still remains.

“We’ve still got a little bit of work to do. We’re still trying to get the smell (out). When it gets really warm, you can smell the paint in the areas where you can’t reach it,” she said.