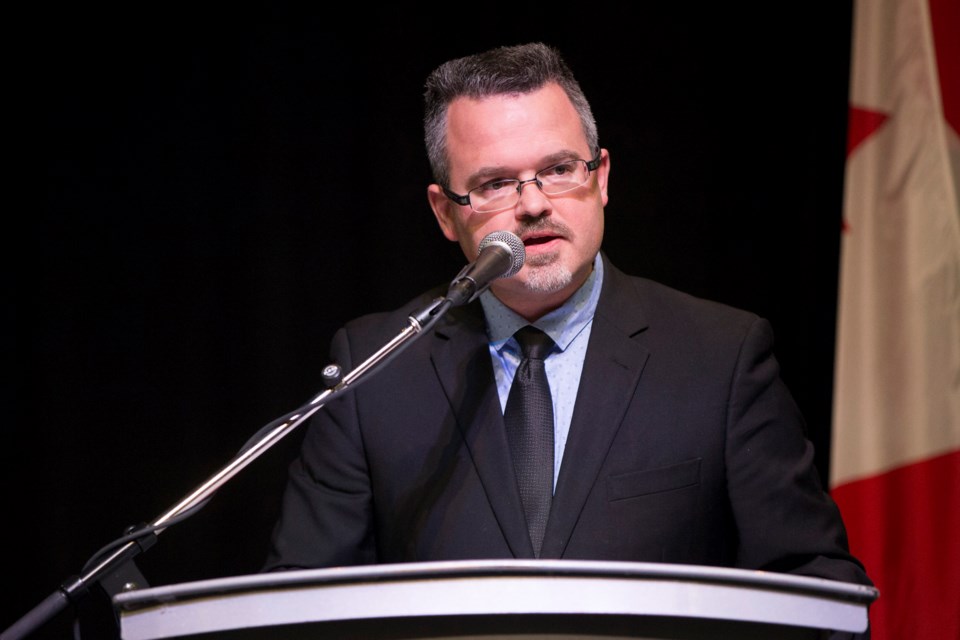 Town of Olds Coun.Mitch Thomson during a candidates forum in Olds in the lead up to the January 2020 byelection.

OLDS — Coun. Mitch Thomson engaged in quite a struggle with fellow councillors over the makeup of the town’s new broadband investment committee during two council meetings on Jan. 11 and 13.

In the end, his effort to get on that committee failed. He remains excluded because the committee consists only of the mayor and all other councillors who are on the deputy mayor rotation.

Thomson was stripped of the ability to serve as deputy mayor as one of the sanctions when he was found guilty last year of violating council’s code of conduct.

Thomson proposed an amendment which would have allowed him to serve on the committee, but it was voted down.

During initial discussion regarding the committee, Thomson said “it appears that the bylaw has been predicated to disqualify me from participation on this committee from the outset. Can you tell me why the bias?”

Mayor Michael Muzychka said in the past council has found that Thomson has played “loose and fast with confidential information in the past with regards to this issue.”

“And you’ve been sanctioned, so we’ve taken this along the lines of the sanctioning, so we’ve struck this committee to ensure that all confidential information remains as such,” he added.

“So is this an additional sanction on top of a previous sanction," Thomson asked.

“No, no. This is just a committee to take care of this business,” Muzychka said.

“Should this bylaw pass, I will be disadvantaged and less able to fulfill my duties as a councillor and the damage will indeed be punitive,” Thomson said.

Later, Thomson asked finance director Sheena Linderman to reveal the legal costs the town has incurred to hammer out an agreement regarding the repayment of loans for the Olds Institute For Community and Regional Development (OI).

During a year-end interview, Muzychka said that debt is in the $18 million range.

Thomson also asked that the cost that the town incurred to investigate him for violating the council code of conduct be revealed.

In both cases, those questions were put off. Thomson was told he could ask to have those queries added to the agenda of an upcoming regular council meeting.

“I think this council is not being transparent. I think it has a duty to be more transparent and I do believe my questions should be answered," Thomson said.

"Not sure if we can do that,” Muzychka said. “As Coun. Thomson may or may not be aware of, the MGA (Municipal Government Act) states that material matters with regards to for-profit corporations should most definitely be conducted in closed doors.”

Muzychka went on to say when the town’s legal advisors say the time is right, all will be revealed to the public.

During the discussion, Thomson described his exclusion from the committee as unfair.

He said he could no longer be construed to have a conflict of interest because as of Dec. 31, 2020, he is no longer an employee of OI. He had served as its executive director for seven years.

Coun. Wanda Blatz disagreed with Thomson's statement, saying that under a separation agreement, he continues to receive money from OI until the end of February.

Thomson countered by saying “I have completed my working notice with the Olds Institute and any funds that they owe me as a part of my termination I don’t think is a valid point.”

Thomson said the committee will have meetings in camera (behind closed doors) and because he won’t be privy to what’s said and learned during those meetings “that does disadvantage me as a councillor.”

However, Coun. Mary Jane Harper said the purpose of the new committee is to advise council on broadband investment matters and it’s just one of the town's advisory committees.

She said any decisions the committee makes must still be brought back to council for ratification and as a member of council, Thomson would have an opportunity to weigh in on those decisions at that time.