Nope to Dope has strong impact on students

École Olds High School Grade 10 students say a presentation about the dangers of drugs really hit home for them. Yvonne Clark's presentation, “Nope to Dope” was part of the annual P.A.R.T.Y.
0
May 7, 2019 10:10 AM By: Mountain View Today Staff 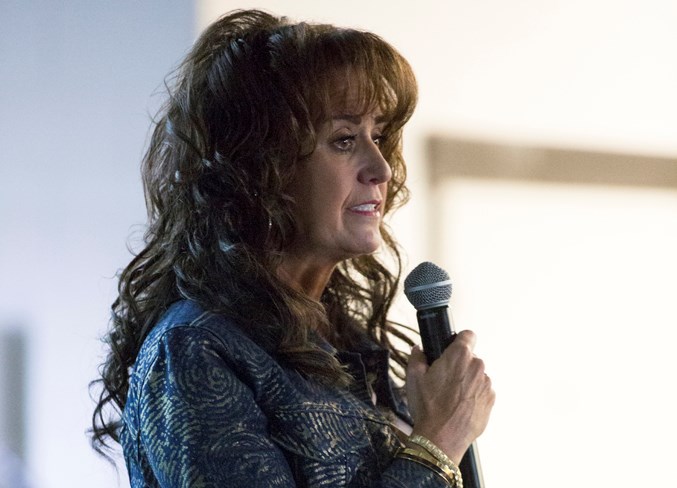 Yvonne Clark gives a presentation on drug awareness and prevention at the Alumni Centre on the Olds College campus on May 1.

École Olds High School Grade 10 students say a presentation about the dangers of drugs really hit home for them.

Yvonne Clark's presentation, “Nope to Dope” was part of the annual P.A.R.T.Y. (Prevent Alcohol and Risk-related Trauma in Youth) program, held May 1. The program's goal is to impress upon youth the dangers of drugs and alcohol and of driving while impaired.

In addition to Nope to Dope, students also witnessed a mock two-vehicle accident. They also toured a trauma room in the hospital as well as the Heartland Funeral Home and chapel.

Yvonne Clark’s son Conner Clark was only 21 when he passed away in 2013 from an opioid overdose. Since then, she has made it her mission to spread her story and information about drugs, drug prevention and understanding that addiction is a disease.

“Society has labelled drug users as a whole as less educated. This can happen to me or to anyone in this room. It doesn’t matter who you are, it doesn’t matter what race you are; addictions cross all barriers,” said Clark.

Several students told the Albertan that Clark's presentation really got to them.

“Yvonne telling her story about her son was really eye-opening because you don’t really hear people who  lost someone like that,” said Jessica Toews. “Usually people shut down and aren’t that open about it.”

Her classmate Scarlett Hutchison said the presentation was far more effective than other anti-drug presentations they’ve seen in the past.

“I found this really interesting because when we first took D.A.R.E. (drug abuse resistance education) in Grade 5 they tell you drugs will kill you, but don’t tell you how much will kill you," said Hutchison.

“You really got a perspective of how easy it is; like you need two milligrams of fentanyl to kill you.”

Zachary Taylor, another student who attended the presentation said, “It certainly puts a lot of things into perspective, like how fragile life can be, and to a certain extent how much one stupid decision can impact everybody.”

The three students said that while they have already decided that they have no interest in drugs, this presentation just reinforced that decision further.

“I was always a hard no, but this made my hard no a harder no,” said Toews.