James Varnam went from living on the street to running international luxury golf tour business
Aug 16, 2020 9:00 AM By: Doug Collie 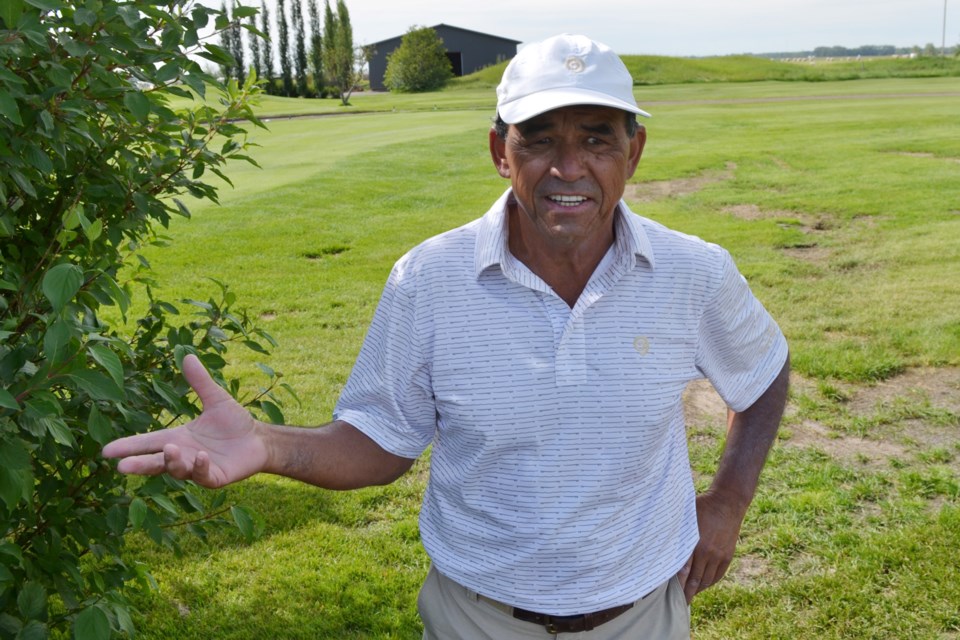 OLDS – One of the greatest competitors in the Alberta Senior Men’s golf tournament in Olds was New Zealander James Varnam.

Varnam, 60, and his wife Trish normally live in New Zealand or Mexico, but became stranded as a result of the COVID-19 pandemic.

They ended up staying in the Edmonton area because Trish is Canadian and they have family and friends there.

While in this country, Varnam has made the best of it, practising golf and entering tournaments around the province.

He led the field after the first round of the tournament in Olds before succumbing to eventual winner Grant Oh of Calgary.

Varnam has had one heck of a life.

Born in a kind of commune in New Zealand and living on the streets for the first few years of his life, he ended up playing on PGA tours around the world before setting up his own business, which takes people on luxury golf tours.

“I’ve played in a lot of tournaments, met a lot of really good players, younger players.”

He had great praise for his fellow competitors in the senior men’s tournament.

“I played in the senior tournament last year. Great bunch of guys, they’ve all been there and done it. Nobody’s trying to prove anything, it’s just a great tournament to play in,” he said.

Varnam said as a young child, he never really saw his parents.

“It was just a time of sex, drugs and rock and roll and they lived a different lifestyle,” he said.

Over time, Varnam ended up being passed from house to house before striking out on his own at the age of 11.

He got odd jobs and finally became a caddy.

One of the ladies he caddied for gave him half a set of golf clubs one day and he began practising.

At age 15, he won the New Zealand Juniors with that same half a set of ladies clubs.

“To this day, I’m the only person who won the national title that never got to play for New Zealand,” Varnam said.

“I don’t know if it was because I was a Maori or because of my lifestyle,” he said, admitting that due to his lifestyle back then, he “wouldn’t have been a good representative,” but that hurt him, so he moved to Australia.

There, down to virtually no money, he agreed to caddy for a 17-year-old guy who also had practically no cash.

“We took our entire net worth between us and we stuck it on the table and we said, ‘well, should we get something to eat or should we buy a golf ball?’” Varnam recalled.

“We decided to buy a golf ball and he went out and he shot 67 and he won the South Australian Open.”

That provided Varnam with a $1,200 share of the winnings. From there, he flew to America.

At first, he slept in a garment factory warehouse. However, eventually, Varnam ended up qualifying for the PGA in New Zealand and played on PGA tours around the world.

“I mean, it was amazing. I was doing what I wanted to do,” Varnam said.

“But it’s only in hindsight that I can look back on it; I had very little self esteem. I had nothing on the inside.

“I mean, I had a tremendous amount of drive and a lot of passion, but you know, I couldn’t trust anybody, I didn’t know what love was, I didn’t have any kind of emotion.

“When you grow up on the street, you live by codes, and that’s it; that’s all you know. You’re a survivor and that’s what I was.

“But as far as the game, what I had? I had a short game that I could match with anybody’s, absolutely anybody’s.

“I putted for money. I putted my way around the world. Nobody could out-chip and out-putt me. Nobody.

But I just didn’t believe in the rest of it,” he added.

However, the money didn’t last. After about nine years, he owed a lot of money, so he decided to set up his luxury golf tour business, which he has now been operating for 35 years.

There were some tough times along the way.

But with the support of a sponsor who is still helping him out, and by finding religion, he turned his life around.

“I’m no longer a taker, I’m a giver. I’ve learned how to put things into peoples’ day,” he said. “I kind of look at it more ‘what is it that I can put into the world?’”

Varnam loves golf and is grateful for what it’s done for him.

“Golf saved my life,” he said. “I love playing; I really enjoy it. I love competition.

“But I just have this thing in my heart for golf because of where I was and where it took me to. So I try to give back as much as I can, through golf.”