A man who struck an Innisfail RCMP officer with his vehicle during a high speed chase on the QE II Hwy. has been sentenced to six years in jail.
Nov 5, 2010 1:00 AM By: Great West Media 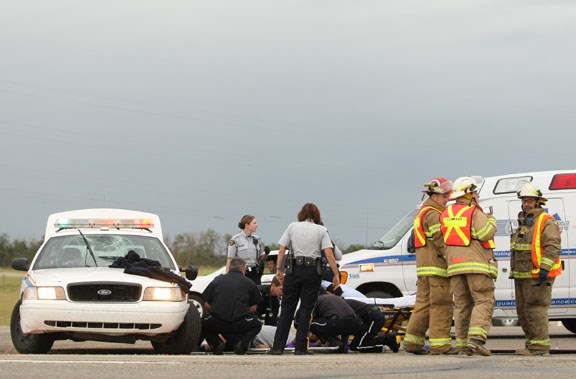 Pictured here is the scene where RCMP Const. Danny Knight was struck by Kenneth Janzen’s vehicle on July 30, 2008.

A man who struck an Innisfail RCMP officer with his vehicle during a high speed chase on the QE II Hwy. has been sentenced to six years in jail.

Kenneth Thomas Janzen, 27, of Saskatoon, plead guilty to one count of flight from police causing bodily harm, one count of assaulting a police officer and one count of dangerous driving.

On Friday, Red Deer's Court of Queen's Bench heard that on July 30, 2008, RCMP responded to a complaint of a person, later identified as Janzen, who was standing on the side of the highway near the Alberta Sports Hall of Fame throwing rocks at passing vehicles.

RCMP officers approached him and asked what he was doing. They asked for his identification.

At that point, Janzen went to his vehicle to retrieve his identification, but drove off southbound on the QE II Hwy. with a female passenger (Janzen's common law wife) in his car.

RCMP Const. Danny Knight, was deploying a spike belt on the highway adjacent to the Old Pole Road, about five kms north of Innisfail, when he was hit by Janzen's fleeing vehicle. Police said the suspect directed his vehicle toward the officer, striking him.

Janzen continued to flee southbound on the QE II Hwy. A spike belt was deployed at the Old overpass where Janzen ran over it which caused his tires to puncture. The vehicle then rolled numerous times before he was arrested.

The three counts of attempted murder stem from the incident where the officer was struck and also when the suspect directed his vehicle at two additional officers who were in position to deploy another spike belt near Olds which caused the vehicle to roll.

The kidnapping charge was in relation to the female passenger in the vehicle during the pursuit.

Crown Prosecutor Jason Snider and defence lawyer Arnold Piragoff struck a deal and the majority of these charges were dropped.

Piragoff told the court that Janzen had a severe addiction to marijuana and had heavily smoked the drug before the incident. He also indicated Janzen was suffering from psychotic symptoms at the time of the offence.

"My client suffers from schizophrenia and he is not in the same state of mind now that he was at the time of the incident," he said.

During one of Janzen's court appearances shortly after he was arrested, he told the court that God was talking to him and told him to do the things he did.

Snider said regardless of Janzen's state of mind, the nature of his offenses are serious.

"A police officer was struck with a vehicle and there was no concern for him," he said. "The chase went on after that and a vehicle was aimed at two more officers."

As a result of the incident, Knight suffered a broken leg and multiple bruises. Court heard he was not able to return to work until about a year after suffering his injuries.

He will also be prohibited from driving for three years after his release.

Janzen said after his release he hopes to return to Saskatchewan and reconnect with his common law wife and their three children.

"The week leading up to this incident I wasn't myself," Janzen told the court. "We (his common law wife) and I were heading to the coast to get married at the time. If Danny Knight were here I would say that I'm sorry."