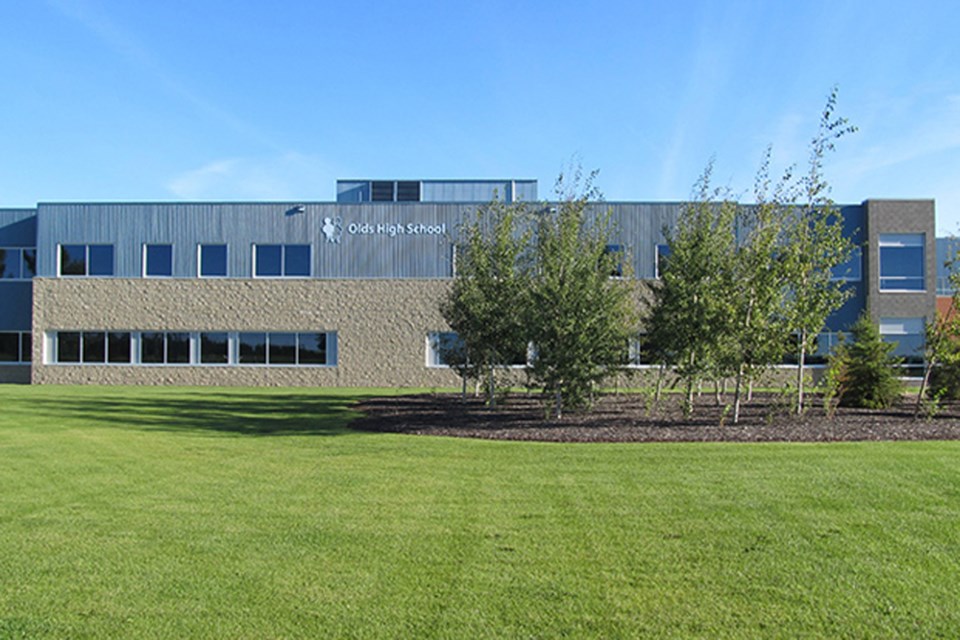 OLDS -  Following is the last instalment of annual École Olds High School academic awards, handed out earlier this fall at the school.

Michael Prysunka received the Hildebrand Award which goes to a Grade 12 student who has achieved the second highest average in English 30-1, social studies 30-1, mathematics 30-1 and the highest science of biology 30, chemistry 30 or physics 30.

The Dot's Day dual credit award, which goes to an ÉOHS student who has been an exemplary ambassador in a dual credit program or course was presented to Brennan Robb.

The French enrichment scholarship went to Montana Durand. It's presented to a Grade 12 student who, in an essay format, discusses the importance, impact and assistance that French has played in his or her life. The award is sponsored by the Olds chapter of Canadian Parents For French.

Dahlia Erick received the Bower Dental bursary which goes to a graduating student who has contributed to the school community.

The Grade 12 initiative award, which is sponsored by O-NET and goes to a student who is willing and available to give a helping hand for the benefit of the school community, was presented to Taylor Haffner.

Montana Durand received the Mountain View Film Group award. It is presented to a graduating student who has demonstrated outstanding commitment, dedication, reliability and enthusiasm within the school, especially in the area of the arts.

The CKLJ FM music scholarship, which goes to a student who is pursuing music or music studies, was presented to Travis Redgwell.

The Don McArthur memorial scholarship is awarded to two or three graduating students who have contributed to the arts during their high school years.

Students who apply for this award must submit an essay describing how music/the arts has influenced their high school experience.  One of the recipients must be enrolled in a post-secondary institution. This year's winners were Rexelle Asis and Montana Durand.

Jaimie Nate received the Grade 12 Exxon Mobil award, which goes to a student who has displayed perseverance and determination.

Everett Lloyd was presented with the resiliency award which goes to a graduating student who has shown courage during his or her school years, despite personal challenges.

The Grade 12 Dot's Day award went to Jasper Lind. It's presented to a Grade 12 student who helps and empowers others to achieve their goals and who celebrates the success of others without seeking recognition.

The TyKem Electric Ltd. RAP  award and the ProAll RAP award, both of which go to graduating students who have been great ambassadors for the RAP (Registered Apprenticeship Program) were presented to Ryan Wright and Helena Troschke respectively.

Nolan Layden received the Gordon Mitchell Memorial RAP award which is in memory of a Grade 11 ÉOHS student who passed away suddenly in December 2003. He was described as an "amazing ambassador for RAP."

Montana Durand received the Western inspirational award which goes to a student who has displayed outstanding community and/or school spirit.

The Grade 12 Rotary Club of Olds service above self award which goes to students who display service above themselves in the community went to Paden Knull and Jazzlyn Thompson.

The Lions Club award, which goes to a graduating student involved in school and community activities and who shows initiative in class, went to Hein Brunner and Kayla Praill.

Avery Petersen and Michael Prysunka received the Lions legacy scholarship, which is presented to a graduating student attending a post-secondary institution who exhibits the Lions' service-oriented philosophy by actively volunteering in the community.

The Helen and George Kilik scholarship, a bursary which goes to two students who are strong in math and science and have contributed to extracurricular activities and who are currently enrolled in a post-secondary institution, was presented to Rexelle Asis and Paden Knull.

Woodrow Junkins scholarships go to students who have demonstrated academic achievement and who have graduated from École Olds High School. In order to receive these scholarships, they must attend a post-secondary institution before June 2021. Forty-one such scholarships were given out at $500 each for a total of $20,500.