Lots of effort by thief gains nearly nothing 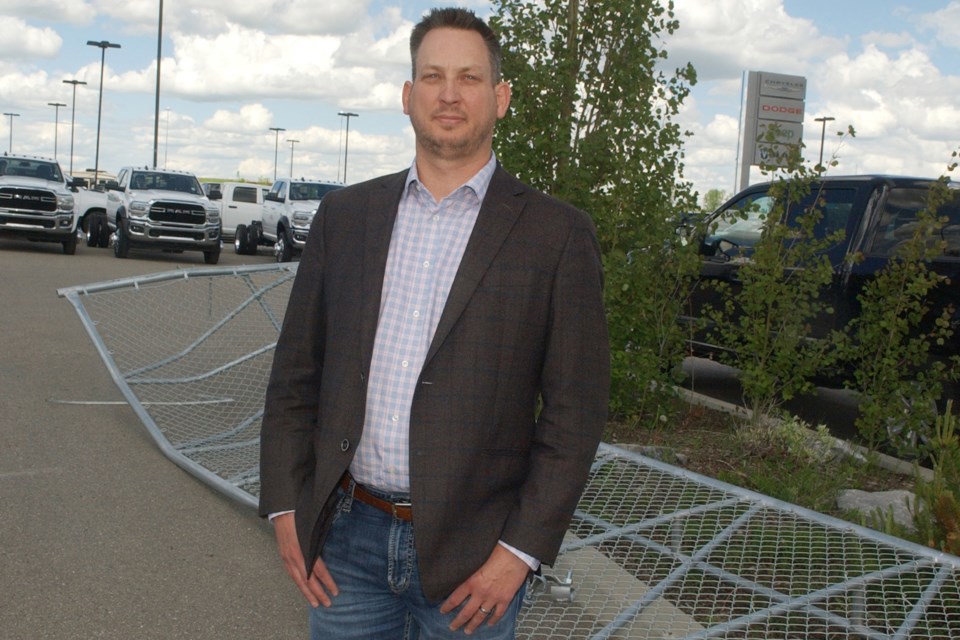 Mountain View Dodge general manager Clinton Slack stands in front of a fence broken down by a suspect as he stole several dead batteries and used tires during a break-in around 4 a.m. June 16. Murray Elliott/MVP Staff

OLDS — Mountain View Dodge will likely beef up its gate and fencing in the wake of a break-in that occurred last week.

However, general manager Clinton Slack says they’ll probably stick with the security system they have, rather than hire a security guard or get dogs because they’ve been down that road before.

And the security system works better, he said.

“We’ve had security guards in the past and we’ve had just as much stuff stolen or damaged having a security guard on the premises because they can’t see everything,” he said during an interview.

“Sometimes they fall asleep, sometimes they’re facing the wrong direction. If they’re going from one location to another they’re watched.

“If you have a security guard who’s watching in another location and is away from you for 15 minutes and they know the schedule and they’re watching what they’re doing, you’re still going to have the same issues.

“So we’ve found that what is most effective is to have the security system we have that automatically dispatches the police.

“And as long as the police can get away from the detachment quickly, they’re either deterred or caught. We’ve had positive results that way.”

Dana Andrew Myshak, 55, of Red Deer faces six charges and was in custody awaiting a June 18 court appearance in Calgary after allegedly breaking into the Mountain View Dodge compound at about 4 a.m. on June 16.

Slack says the suspect rammed the dealership’s gate/fence with a U-Haul cube van until he broke through. RCMP allege the van was stolen.

Once he got through the fence, the suspect stole four used tires and about 10 dead batteries.

The security system alerted police and the chase was on.

The suspect took off in the cube van with batteries flying out. He drove north on Highway 2, went in the ditch and a farmer’s field before being tracked down by a police dog and arrested.

Myshak is charged with breaking and entering and theft, mischief over $5,000, possession of stolen property over $5,000, flight from police, driving while unauthorized and operating a motor vehicle while uninsured. He was also wanted on warrants in Blackfalds and Calgary.

The batteries were on a flatbed.

“(They’re) dead batteries; no good batteries that we’d replaced with good batteries,” Slack said. They just sit there till the guys come and take the cores away. So they’re probably worth maybe $5 or $10 a battery to someone who can dispose of them.”

He described the tires as “pretty much worthless.”

“We keep any good tires that have substantial tread on them to recondition our used vehicles, Slack said. “So if they were in the back, they wouldn’t have enough tread on them to keep, so they’re pretty much worthless.”

Slack agreed there’s great irony in the fact the suspect went through all that effort to steal what turned out to be worn-out tires and dead batteries.

“It didn’t make sense to me either,” he said with a laugh. “But I’ve learned after my experience here and all the break-ins we had that it usually doesn’t make sense what they do.”