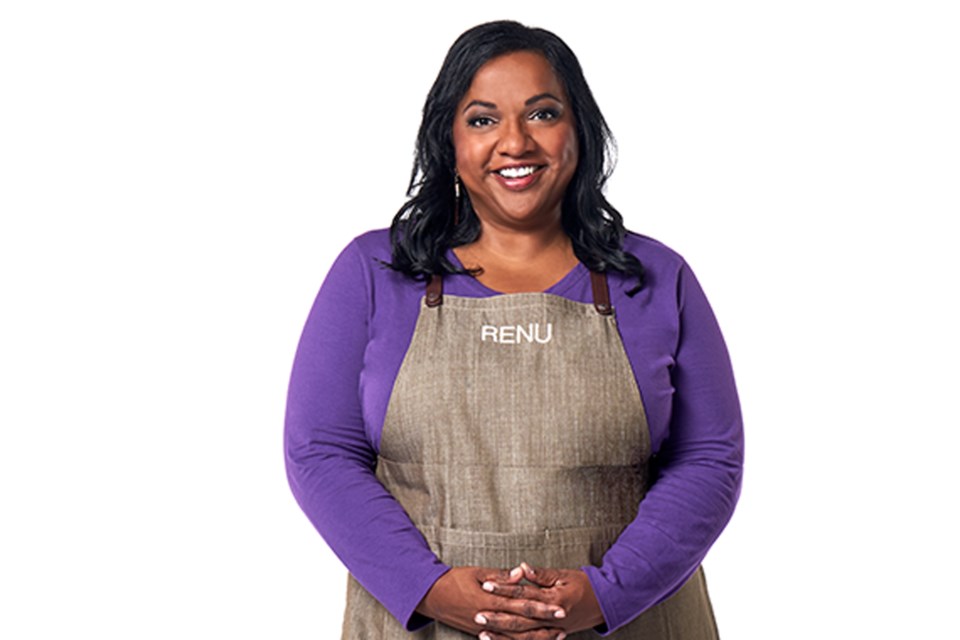 Olds teacher Renu Mathew was one of 10 competitors in the Great Chocolate Showdown and one of only five Canadians to compete. Photo courtesy the Food Network

OLDS — This Tuesday, Feb. 4, École Olds High School art teacher Renu Mathew will be on nationwide TV in the first installment this season of the Food Network’s Great Chocolate Showdown.

Mathew was one of 10 competitors in the event, and one of only five Canadians to compete.

The premiere will be televised on the big screen at the TransCanada Theatre that night. Doors open at 6 p.m. The show begins at 7.

“We have fair trade hot chocolate that will be served and we’ll have door prizes – for chocolates that I make, actually,” Mathew said in an interview. “Everyone is welcome.”

When she was a child, Mathew used to watch her mother bake, often for yearly charity events her parents would host.

However, Mathew says she only became interested in sculpting chocolate in 2015 while on a teaching exchange in Australia.

“I started playing or working with chocolate in 2015 when I did a teaching exchange in Australia and I was watching Master Chef,” she said.

“They were doing some cool things with chocolate,” she said. “I think because of my sculptural background, I was intrigued.”

Mathew started posting her work with chocolate on her Instagram account. Great Chocolate Showdown reps saw those posts, contacted her, and invited her to be on the show. It was taped last summer in Toronto.

“It was an incredible experience,” Mathew said. “It’s one thing to watch these shows, but it’s a completely different experience to be in the show, because the bakes are real. They’re real. The timing is real, the timers are real. So there’s a lot of pressure and stress involved.

“But it really pushes you to kind of do the best you can in a really short amount of time.

“I love working with chocolate, so I felt fairly strong with my chocolate skills.

But baking is sort of different. (With) baking, you know, things can happen; you never know,” she added.

There were other challenges too.

“Obviously there are frustrations – and surprises too,” she said. “You’re not in your own kitchen so you’re trying to figure out where things are kept.

“I mean, it’s a simple thing. If you’re not in your own kitchen trying to make something, it’s frustrating when you can’t find the measuring cups or spoons or ingredients. But eventually you figure it out.

“But it’s different when there’s a timer. So you have to adapt and figure it out,” she added.

Chocolate sculpting is just one of several things Mathew is passionate about.

She not only teaches art, she also continues to create art, with a special interest in ceramics as well as painting and drawing.

Mathew teaches cosmetology as well, but also does makeup for actors in films and TV shows when she’s asked to do so and can fit it in to her life.

“Anything artistic or creative is what I’m passionate about," she said. "You know, it doesn’t really sort of matter what the medium is; I like to kind of experiment with everything.”

Mathew is hoping she’ll get another opportunity to participate in Great Chocolate Showdown.

“It was a lot of fun and I met great people. And everybody who worked on the show was amazing,” she said.

“If there’s a sequel and they invite me, I would go. If they have a season 2, who knows?”

Speaker brings legislature's mace to Olds
Feb 25, 2020 6:20 AM
Comments
We welcome your feedback and encourage you to share your thoughts on this story. We ask that you be respectful of others and their points of view, refrain from personal attacks and stay on topic. To learn about our commenting policies and how we moderate, please read our Community Guidelines.