At 18 years of age, Red Deerian Sam Rahbek-Ward has certainly faced his share of struggles. Born with cerebral palsy, there are constant physical challenges as he goes about his day to day routines.
Nov 5, 2010 1:00 AM By: Great West Media 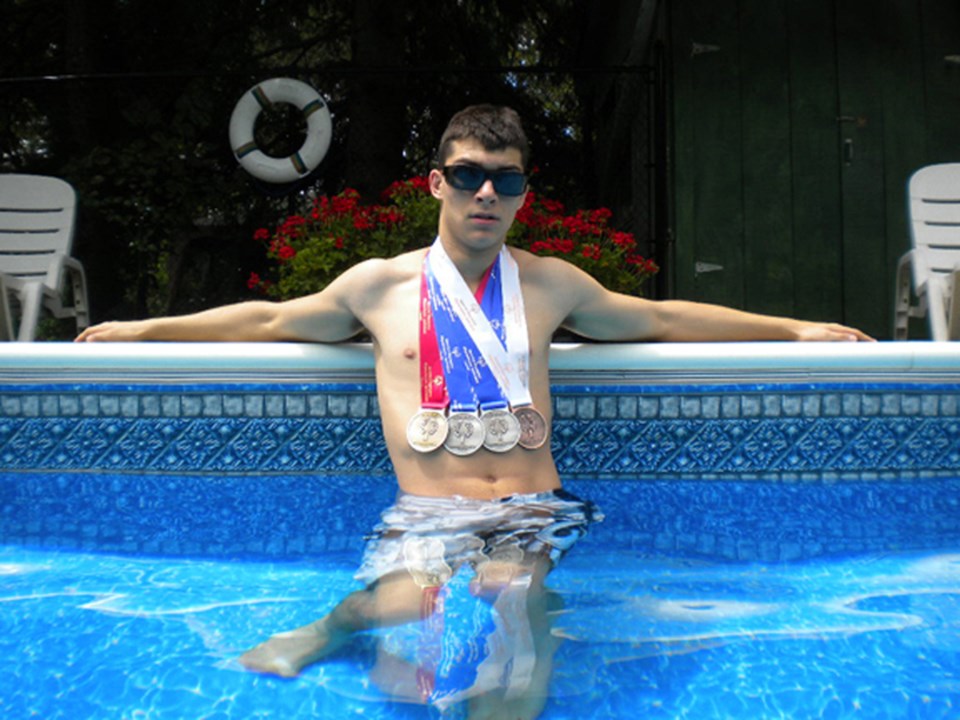 At 18 years of age, Red Deerian Sam Rahbek-Ward has certainly faced his share of struggles.

Born with cerebral palsy, there are constant physical challenges as he goes about his day to day routines. But when spending time with Sam, you quickly start to see that his determination, quick wit, energy and spirit shine through at every turn.

These very qualities are what helped propel him to a fantastic performance at the recent Special Olympics Canada Summer Games in London, Ontario where he landed gold in the 25 metre freestyle, bronze in the 25 metre backstroke and silvers in the 50 metre backstroke and 50 metre freestyle. Sam attended the competition with his parents Leslie Rahbek-Ward and Gordon Ward.

Dedicated to his sport, he trains consistently every week.

"The theme when I'm swimming is 'good, better, best -- never let it rest. Good is better, better is best'," says Sam during a chat in his Grandview home. "What I like about swimming is the power in it. I have to have speed, confidence. The point of it also is to have fun."

Special Olympics Alberta offers sports programs in more than 30 communities across the province. Since it was founded in 1980, the organization has grown from having a few dozen athletes to one in which more than 3,000 athletes compete in 15 official sports and three unofficial sports.

"For us, it's really important that people start becoming more aware that these guys work harder, I would say, and give up more to do the Special Olympics than normal Olympic participants do," says Sam's proud mom Leslie. "We had a kid there that had a seizure in the hospital, and day later he's out there competing. They refuse not to take part – it's amazing what they will do. They've worked really, really hard."

Watching Sam excel in swimming has also been an absolute inspiration for his family, says Leslie. "It's phenomenal. Three or four years ago, I would have never expected it. And I wouldn't have expected him to have that intense focus from the beginning of the races, across the pool and back again.

"It's amazing what he's accomplished in the last few years, and the professionalism that these athletes show.

"It was also amazing to watch him in London – I screamed a lot," she adds with a laugh. "As parents, we could only be up in the cheering stands. So it was really hard getting your voice heard over about a thousand other people."

For Sam, the cheers were certainly encouraging but when it came right down to it, he had to think only about swimming. "I have to focus on swimming – nothing else," he says.

Jan Gair, a local coach for Special Olympics in Red Deer, has been working with Sam for about four years. From the start, he has shown steady progress and was never short on enthusiasm as he honed his athletic skills.

"He's got a lot of upper body strength, and we've really centered on that," she explains, adding that when it comes to training, it's a pretty tough regime. "We work them very hard, but they also work very hard for us."

As coach, it was of course the icing on the cake to see him perform so well in London.

"It's really nice to take part, helping them and encouraging them to reach for their goals and be able to achieve them."

Looking ahead, she has nothing but confidence in her local athletes.

"By the end of August or the early part of September, we'll get notification as to the national team that will be chosen," she says. That team would promptly begin training for competitions in Athens next summer. Sam is clearly enthralled at the possibility and his coach remains optimistic about his chances.

"Sam could be on that team, but we don't know yet."

For more information about the Special Olympics, check out www.specialolympics.ab.ca.