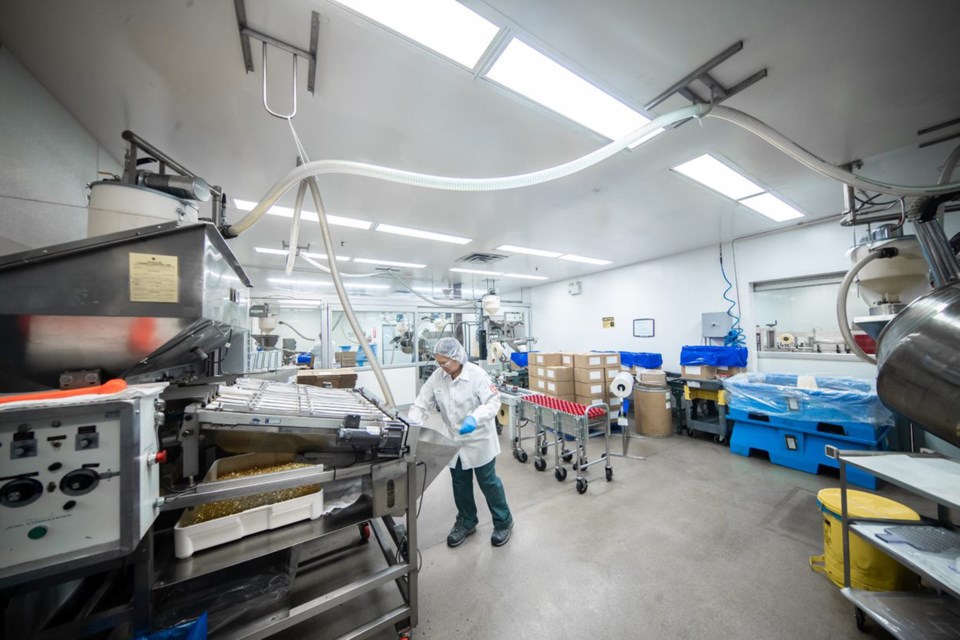 Normally, OSG Manufacturing in Olds makes pharmaceuticals and nutraceuticals for other companies. But it has now made hand sanitizer as well for businesses and residents in the Mountain View County region. Submitted photo

OLDS — A local company has been making and selling hand sanitizer as its way to help out the community during the COVID-19 pandemic.

The company, OSG Manufacturing — formerly known as Olds Soft Gels and before that, Banner Pharmacaps —- began producing the product about a month ago after receiving a suggestion that there is a need for it in the community.

They’re basically being distributed in the Mountain View County area, although some may go as far north as Red Deer.

Various companies, especially those in the distilling industry, have been making hand sanitizer during the the pandemic lockdown.

Nibber says the difference with their product is that they’ve gone one step further. They’ve taken the time to apply for and receive a natural product number (NPN) from Health Canada.

Nibber says that designation makes it a pharma grade product and signifies that it contains at least 70 per cent isopropyl alcohol.

“The advantage of that is that you get a claim and the claim of course is that you’re allowed to put in there ‘kills harmful bacteria, germs,’” Nibber says.

“That’s a claim that the government gives you as long as your concentration is around 70 per cent.”

Making hand sanitizer is not OSG Manufacturing’s core business. It makes pills and nutraceuticals for other companies. Nutraceuticals are foods or food additives said to offer health benefits.

“But because we’re a pharma plant, we handle IPA, the isopropyl alcohol, which is the main ingredient that goes into the hand sanitizer, we just thought, well with the huge shortages, that we could address that,” he said.

The company began the process to make the hand sanitizer in about early March. They applied for the NPN in about mid-March and began producing it in about mid-April.

Nibber says they’ve limited distribution of their product to essentially the Mountain View County area because they don’t have the capability to distribute it across Canada.

“Across Canada, the issue just becomes one of transportation and logistics,” Nibber said.

“Locally we can and we just felt that locally there was a need and I think there still is a need.”

Like many other hand sanitizers created recently, Nibber says the OSG one is “more of a liquid” than the products we used to see even a few months ago.

He says that’s because there’s a shortage of the agents used to thicken sanitizers, which are mainly produced in the U.S.