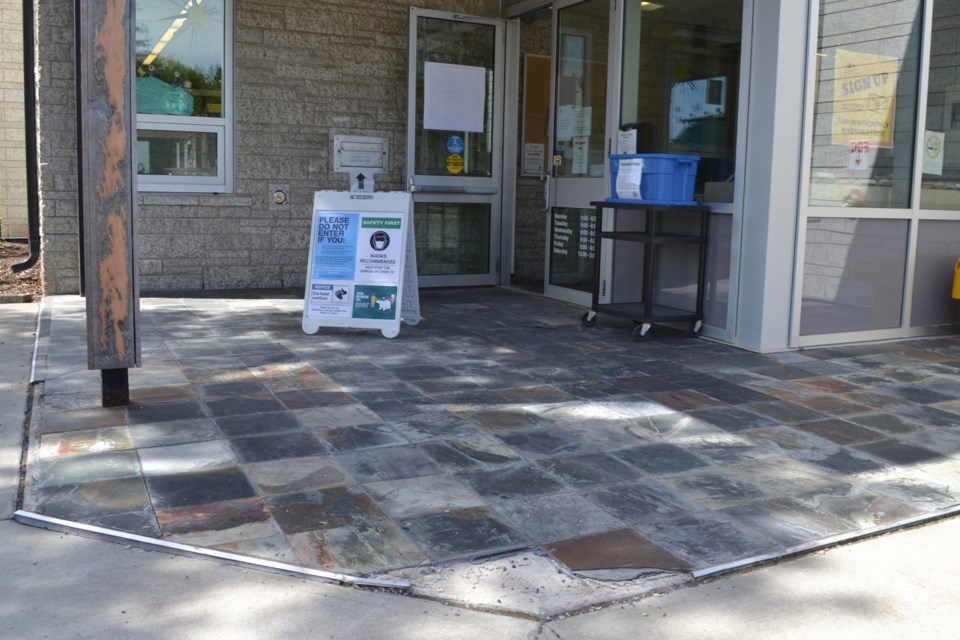 The main entrance of the Olds Municipal Library is missing at least one tile at the very front, and several others are chipped. The safety of the entrance came up during a couple of council meetings. Town staff are working on a solution. Doug Collie/MVP Staff

OLDS — The town is looking into replacing the Olds Municipal Library's main entrance due to safety concerns.

“The slate tiles at the front entrance began chipping last winter. As it was not fixed, (they) continued to chip. It has been a safety concern and a tripping hazard,” Bennett wrote in an email.

“We’ll have to look at what good options there are for not having tiles,” he said during discussion in council.

Chant said one idea being considered is to install stamped concrete to provide safe footing.

“That is on the list to be dealt with,” he said.

When contacted, library manager Lesley Sackett Winfield was surprised the matter was even seen as much of an issue.

“Yeah, there are a couple of tiles that are chipped, but nothing super out of the ordinary or anything that in my opinion needed to be raised,” she said.

Sackett-Winfield said no one from council or the public expressed concern about the tiles to her.

Break-in at Big Rack Rentals under investigation
Aug 5, 2020 11:00 AM
Comments
We welcome your feedback and encourage you to share your thoughts. We ask that you be respectful of others and their points of view, refrain from personal attacks and stay on topic. To learn about our commenting policies and how we moderate, please read our Community Guidelines.