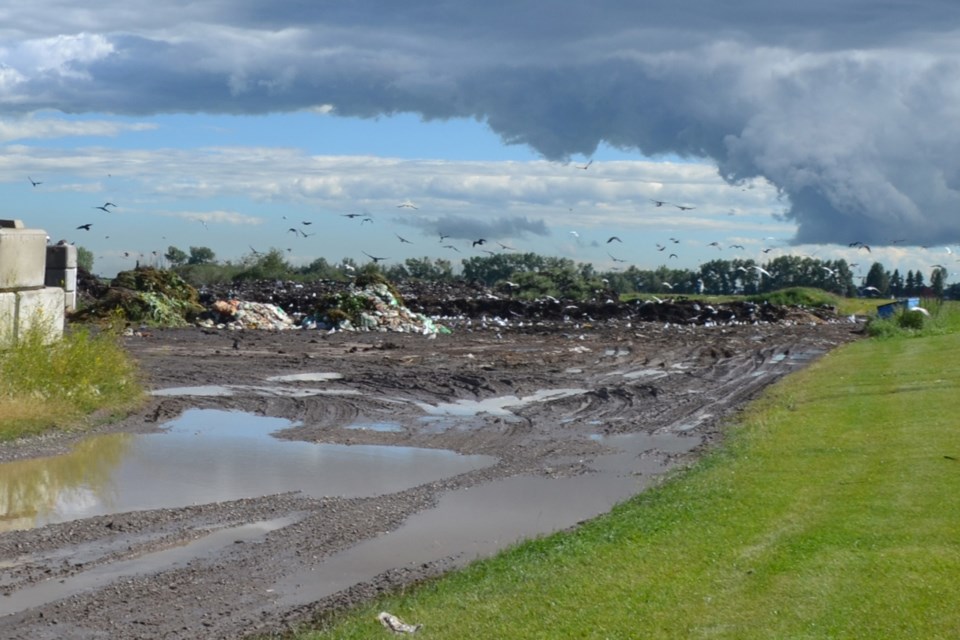 Local residents are upset about the smell emanating from the compost facility at Olds College. Doug Collie/MVP Staff

OLDS — Olds College is ending its contract with a composting company in an effort to reduce the bad smell and large number of other birds and pests in and around the site on the college grounds.

The Albertan published a story citing concerns from residents about those issues on Aug. 13.

Under the deal, Stoney Soil Products (SSP) will stop accepting new municipal waste material for composting by Nov. 30 and will have all its equipment, compost and other material off the site by Dec. 31.

Then as of Jan. 1, 2021, the college will then take over the site again and operate it as a non-commercial compost facility which will only process farm and other material generated on-campus.

Joy Agnew, the college’s associate vice-president of research and Patrick Machacek, its vice-president of development and strategy, made that announcement during a 42-minute virtual town hall, held the evening of Sept. 1.

“With the transition to non-commercial or private operations, the volume of material being composted will be greatly reduced,” Agnew said.

She said the hope is that will “minimize” the odour and health concerns that have been generated by the facility.

Surrounding residents say those issues have been compounded – if not created – during the past couple of years that SSP had been operating the facility.

One meeting participant said they lost an ewe last winter when crows and ravens took “her eyes out and it was very disturbing.”

Agnew -- who has done research in composting and will lead the transition and the operation when it’s in Olds College hands again -- said it’s her belief that the smell was created by a combination of too much material, the wrong carbon-to-nitrogen ratio and not turning the stockpile and windrows enough to allow oxygen in there.

She said the college operation will use far less material. It will also have the correct carbon-to-nitrogen ratio and the stockpile and windrows will be turned sufficiently to aerate them properly.

“It’s important for us to make sure that everyone knows that the facility was and is being operated in alignment with the Alberta Environment code of conduct for composting facilities,” Agnew said.

One town hall participant said it’s her understanding that SSP had been collecting compost material from as far as Banff – from bear-proof containers in that town.

Machacek said the college, through the contract, had no power to tell the company where it could and could not obtain compost material.

Agnew and Machacek frequently said the college is anxious to be a good neighbour and that’s the reason for the decision to wind down the contract with SSP and operate the facility itself.

Concerns about health issues arising from the operation came up a couple of times.

“When the compost plant is doing its thing, my throat literally burns. So there’s a physical component, and I’m not the only one experiences that. I think that’s huge,” Agnew and Machacek were told.

“Smell is one thing, but when your life is impacted by the quality of air in your community, that’s pretty serious.

“When there are dead flies dropping on your car and your house and your outside lawn furniture, that’s a problem.”

Several participants said they had tried repeatedly to contact college officials to relay their complaints about the facility but no one from the college ever contacted them.

Agnew, Machacek and Blayne Meek, the college’s director of corporate communications and marketing, frequently apologized for that and promised they will have contact information on their website so people can contact them to register any concerns they have.

Machacek also said the college plans to conduct another town hall next spring to gain feedback from residents on how the college operation has gone – whether issues with smell and health concerns have improved.

Mousek was later asked for her reaction to the town hall.

“They answered some questions,” she said. “I felt like they did do due diligence – holding the meeting for the public.”

But she remains skeptical about how much the problem will be improved when the transition is completed.

And like at least one other participant, Mousek worries about the fact that the transition won’t occur until at least Nov. 30.

“What’s going to happen in between now and then?”

In a later email, Machacek thanked everyone who participated in the town hall.