The ninth annual Olds High School (OHS) Interact banquet was held last week and was a success in the eyes of those involved, with more than 140 guests served.
Mar 20, 2019 1:00 PM By: Mountain View Today Staff 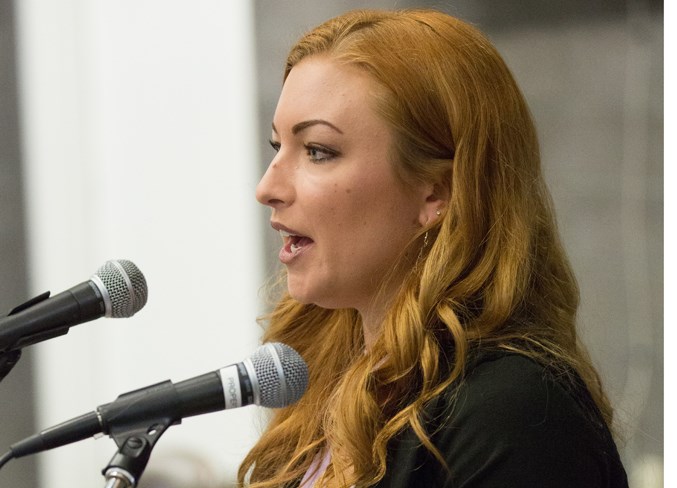 Ashley Anderson gives a keynote address during the Interact banquet.

The ninth annual Olds High School (OHS) Interact banquet was held last week and was a success in the eyes of those involved, with more than 140 guests served.

“I’m feeling fantastic,” said Montana Durand, an OHS Interact Club student, on the night of the banquet, held March 12 in the OHS Commons.

“We’ve got a lot of great people coming out, we’ve got exciting speakers as well,” Durand said.

One of those speakers was OHS alumnus Ashley Anderson who thought the banquet was great and said it felt nice returning to the school in that capacity.

Anderson was once a part of the Interact Club herself and noticed how much it had grown since she was a part of it.

“One thing that was exciting and encouraging was that it was a lot bigger than when I was in Interact,” said Anderson. “There were usually only 10 people tops for all three years and now it looks bigger and they seem to be really engaged.”

Anderson was surprised when Tane Skotheim, who serves as an advisor for the Interact Club, asked her to be a keynote speaker.

“I guess I didn’t think I was the best choice or qualified enough but after talking to Tane I decided 'why not?'"

“We have some really talented alumni and that’s kind of our goal is to have our alumni come back and be our guest speakers, just to let these (current Interact students) know, this is your future,” said Skotheim.

In her speech Anderson spoke about studying abroad, international experiences and the organization she worked for, Mama na Mtoto.

The name is Swahili for ‘mother and child.’ The organization is based out of the University of Calgary and is an initiative between Tanzanian, Ugandan and Canadian partners who strive to improve maternal, newborn and child health in rural Tanzania.

Anderson's involvement with these kinds of groups and organizations is something that she links back to her time in the Interact Club.

“I do think part of that started when I was in Interact, being really involved in the community. So that idea of giving back and realizing what a small piece you are in the global scheme of things,” Anderson said.

Anderson also said that her time in university and travelling abroad also influenced her.

Despite the final numbers having yet to be determined, Skotheim did tell the Albertan that on the night of the banquet they raised more than $5,000.

Of that figure, $2,000 will be going to the club's international cause — Malawi Girls on the Move. It helps young girls afford schooling.

Proceeds from the banquet will also go to many school-related programs.