At first Sandra Comer thought she witnessed the spellbinding movements of a tiny elusive hummingbird in front of her house, hovering above her flowers; its wings flapping in a mesmerizing blur dozens of times per second in search of nectar.
Oct 9, 2012 1:00 AM By: Johnnie Bachusky 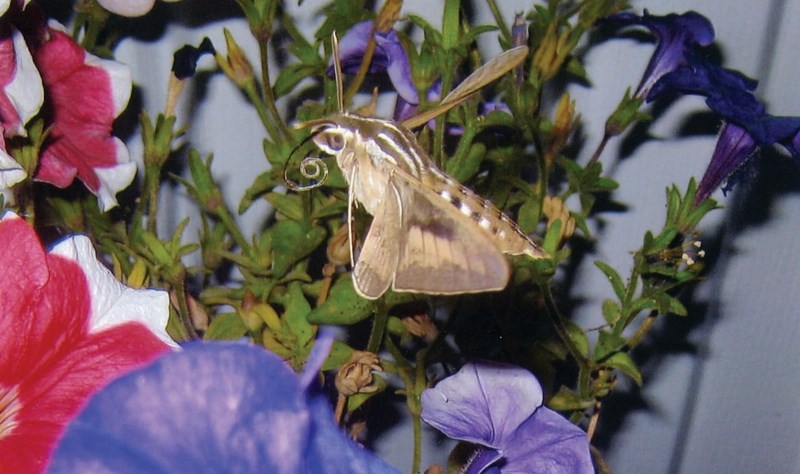 This White-lined Sphinx Moth was an uncommon find in Sandra Comer&#8217;s flowers this year.

At first Sandra Comer thought she witnessed the spellbinding movements of a tiny elusive hummingbird in front of her house, hovering above her flowers; its wings flapping in a mesmerizing blur dozens of times per second in search of nectar.

She grabbed her camera. On closer look, however, it was not a hummingbird. It was a moth.

Comer, 68, was convinced it was the rare Hummingbird Hawk Moth, a species commonly found throughout northern hemisphere countries, from Portugal to Japan, as well as in warmer climate countries in southern Europe and North Africa. To spot one in North America, particularly Alberta, is considered a coup in the continental community of lepidopterists, people who pursue the scientific study of moths and butterflies.

“I love watching birds come and go,” said Comer, whose sighting was on Sept. 24. She added a friend believes she saw one in Olds about seven years ago. “I never thought I would see something so unique as a Hummingbird Hawk Moth. I have lived here years and years and years and I have never seen one before.”

Comer took several photos. They were passed on to Dr. Ken Fry, coordinator of environmental horticulture at Olds College, and a knowledgeable lepidopterist.

After studying Comer's photographs his verdict was that her find, while impressive, was not the Hummingbird Hawk Moth but a White-lined Sphinx Moth, which is in the same Sphingidae family but a different species. The Sphingidae family of moths has more than 1,450 species, including the Hummingbird Hawk Moth and White-lined Sphinx Moth.

“It is, absolutely,” said Fry of Comer's discovery. “I would not say they (White-lined Sphinx) is rare but they are not particularly common to this area. It all depends how they fared south of the (U.S.) border.”

The White-lined Sphinx Moth is a narrow-winged heavy-bodied species with a large wingspan of between six and nine centimetres. It has a striped forewing and a bright pink hindwing with a black basal area and a black terminal band. They are active from mid-summer to early fall. Although largely nocturnal and attracted to light, they are known to search for flower nectar during the day or at dusk.

The White-lined Sphinx will come to Alberta from the northern areas of California, and from Oregon and the state of Washington. They do not overwinter in Alberta.

Fry believes Comer's sighting could be the result of the prevailing winds from a spring storm in the south that sent many different types of insects northward.

“It resulted in an abundance of Monarch butterflies and it may have aided others, like the Painted Lady Butterfly,” said Fry, adding Olds experienced its first sighting this year of the majestic Monarch Butterfly in more than seven years.

Meanwhile, Comer is not in any way disappointed her finding was not of the rare Hummingbird Hawk Moth.

“I am totally excited. I have never seen it (White-lined Sphinx) either,” she said. “I think it is incredible, just incredible.”