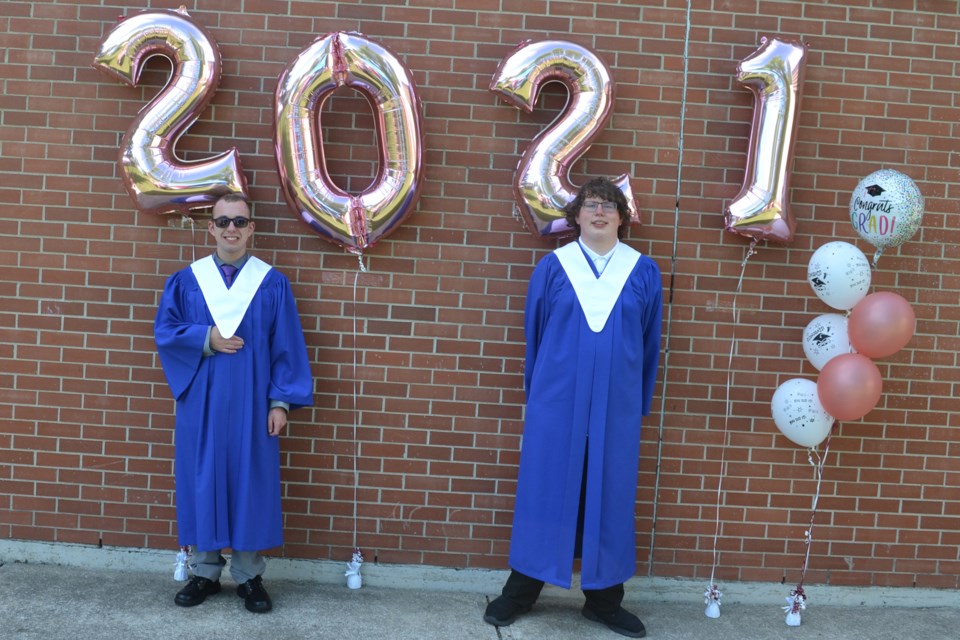 OLDS — Horizon School held its graduation ceremonies on June 11, with staff trying to keep up with changing pandemic restrictions as best they could.

Horizon School is a facility for students with special needs.

Students and their families came for the ceremonies from as far as Innisfail and Cremona.

Individual students were feted throughout the morning and into the early afternoon. All told, the event took about three-and-a-half hours to complete.

The ceremonies were held in the school gym, after which the grads went outside to be with their families.

Staff also paid tribute to the grads and they were each presented with certificates.

McEwen admitted it was really tough to plan this year’s grad ceremonies because pandemic restrictions kept changing, right up until the day before the ceremonies when they were loosened further.

“It's been tough trying to plan for it because, yeah, we’re just waiting on what the next change is,” she said during an interview.

“I think we had two or three different versions of our grad planned, based on what the current restrictions are, so I think most of our students have been very well celebrated today.”

She said during the school year, pandemic restrictions were a challenge for the students, their families, and staff to cope with, but she’s proud of how everyone adapted.

McEwen said staff were a little concerned about how students would adapt to restrictions when they came back to school last fall, but they coped well.

“They all came with an understanding of what the pandemic was and what the new rules were going to be in terms of the increased sanitization and wearing masks, and I think that our families did a really good job of preparing them for that,” she said.

Unlike most school populations, Horizon School students were allowed to take most of their learning in school, rather than virtually.

But at times, they did have to learn virtually and that enabled them to learn new skills around using computers, learning via Google Meet and other programs.

“Digital learning that maybe wasn’t such a huge focus for us before became the primary way they were able to attend school, so they all learned new (skills) in the technology world,” McEwen said.

She said the only thing missing from the grad ceremonies was a chance to provide food, as has been done in the past. However, organizers worked with local businesses and chambers of commerce to patronize restaurants via programs like Olds Bucks in Uptowne Olds and a similar program in Innisfail.

“We couldn’t provide a meal or a reception like we normally would, but we thought that was a good way to still be able to provide a meal and to also support some of our local businesses,” McEwen said.

Dawson Hurst and Johnny Briand of Olds, and formerly of Calgary, were among the graduates.

“Hopefully (I’m going) to move on to the next chapter of my life," he said. “I’m sad because I’m leaving, but I’ll come back for a visit, either which way.

“Horizon has been my heart in the school division for nine years, but I could not agree more to have the staff and students that we need today.”

Hurst now plans to do volunteer work in his home town, although he wasn’t sure exactly what that work will be.

Briand said it was “nerve-racking” to go through the graduation ceremonies.

“Honestly, I like being in the background," he said with a short laugh.

Briand was not sure what he’ll do now that he has graduated.

“Honestly I have no idea, but I’ll go where life takes me," he said.