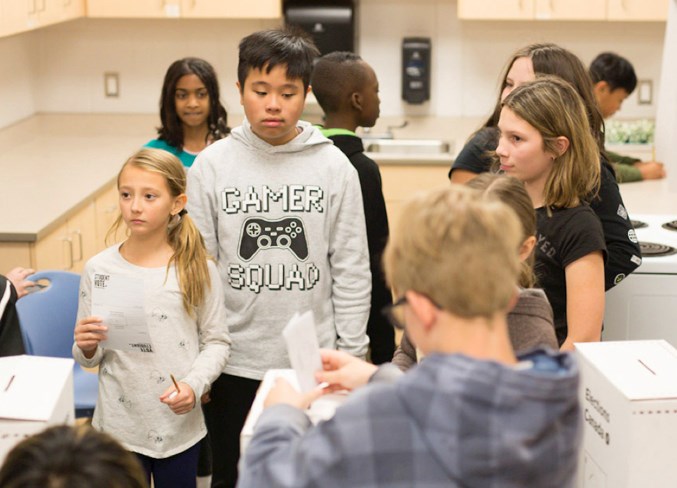 About 110 Holy Trinity students from grades 4 to 6 were "voluntold" to participate, says Grade 6 teacher Darcy Ledrew, who coordinated the project. They voted on Oct. 18. The federal election was held Oct. 21.

Ledrew says 32.4 per cent of Holy Trinity students voted for incumbent Earl Dreeshen of the Conservative Party and 26.9 per cent for People's Party of Canada candidate Paul Mitchell. Logan Garbanewski of the New Democratic Party (NDP) received 17.6 per cent of the votes. Conner Borle of the Green Party obtained 13.9 per cent, and Gary Tremblay of the Liberal party finished last with 9.3 per cent.

Ledrew figures Mitchell did so well in the vote because he had a lot of lawn signs in Olds.

"I think his ability to have signs everywhere, I think that got his name in everybody's mind," he said.

In the Student Vote program nationally,  the Liberal Party obtained 22.3 per cent of the popular vote and won 110 seats, forming a minority government.

The NDP formed the official Opposition with 24.8 per cent of the popular vote and 99 seats.

The Conservative Party took 25.1 per cent of the popular vote and won 94 seats.

The Green Party obtained 18.2 per cent of the popular vote and won 28 seats.

The Bloc Québecois took 1.3 per cent of the popular vote and won nine seats.

In the real election, the Liberals obtained 157 seats, down from 184 in 2015 and didn’t win any seats in Alberta or Saskatchewan. They received 33.06 per cent of the popular vote. The Conservative Party won 121 seats, up from the 99 four years ago and received 34.4 per cent of the vote.

The Green Party obtained three seats, up from two.

Grade 6 students Zoe Boyd and Andrew Murray were among those who voted in the program at Holy Trinity school.

Boyd was asked if she put a lot of thought into who she voted for.

"Not really," she said with a laugh. "I didn't know who the parties were."

She said she watched election coverage on the news after she voted, but not before.

Boyd said there were no issues that stood out for her.

Murray said it was "really easy" for him to decide who to vote for.

"I've never voted before so I just decided just to pick a random person who, like, was the nicest out of all of them. There was one nice one. The other ones just were — rude."

Murray said he wasn't impressed by Green Party Leader Elizabeth May's plan to prevent people from buying fossil-fuel-propelled vehicles and to ensure all cars in Canada are electric in 11 years.

"When she said to get rid of fossil fuels for like, cars and stuff, I didn't really want to vote for her because she said electric cars. But you have to strip mine to get the stuff for electric cars and it just wrecks the earth, so she wasn't really helping," he said. "And no one likes Trudeau — not too much people."

Murray said his uncle is in the oil and gas industry so that was a factor in his vote.

Boyd and Murray were asked if they plan to vote once they turn 18. They both said that depends on whether there's a leader or candidate they believe in.