Graffiti-tagged businesses in Olds urged to report it

Latest spree believed to have occurred shortly before Christmas and perhaps just afterward
Jan 8, 2021 9:00 AM By: Doug Collie 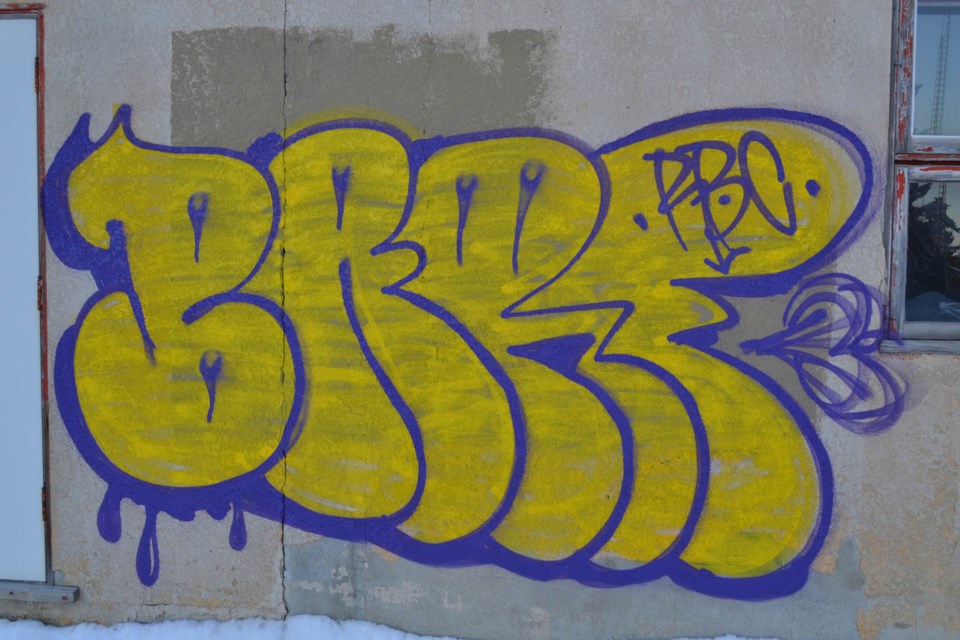 A look at the latest graffiti sprayed on the Cipperly building, which is utilized by Sim's Furniture & Bedding in Olds. Doug Collie/MVP Staff

OLDS — As of last week, RCMP had no leads on who is responsible for the latest spate of graffiti in town, but they’re working on it and could use some help from businesses that have been hit, Cst. Morley Statchuk says.

As of last week, at least three businesses in the Uptowne area had been tagged: the Cipperly building utilized by Sim's Furniture & Bedding, The Albertan building and the ATB building.

It’s believed the buildings were tagged shortly before or just after Christmas.

In an interview, Statchuk said as of last week, RCMP had only received a complaint about the latest round of graffiti from Sim's Furniture.

He urged businesses that have been hit to report the matter in order to help police solve the case.

“Right now we don’t have any leads because there’s no video, there’s no suspects, no witnesses, so I guess we’ll see if there’s anything further, but nothing right now from that end,” he said.

When asked if he’d recommend businesses report graffiti, Statchuk said, “well of course, any mischief, because it's like anything.  You may not have a lead in one, but there could be something that could tie them together. If we don’t know about it we can’t investigate it.”

Statchuk said video cameras on buildings make the job of investigating mischief like graffiti that much easier.

He noted that police were able to charge people in relation to vandalism at the splash park a few months ago, largely thanks to video footage.

Statchuk said a news release featuring that footage spurred members of the public to come forward with much-needed leads which eventually helped solve that case.

“So it’s no different. If you own a building and it gets tagged and you have video it could help solve it. And then we can utilize you guys (the news media) to put information out that can bring people forward," he said.

So far, there’s no indication the graffiti is at all gang-related, he said.

Lyle Blatz, co-owner of Sim's Furniture, is pretty frustrated about the whole thing.

“It’s unfortunate that they do this and I mean, they just deface property," said Blatz.

Blatz sees the graffiti as an expensive nuisance, as under the town’s community standards bylaw, property owners are responsible for covering it up.

Specifically, the bylaw says within 72 hours of becoming aware of the graffiti, “the property owner shall ensure that all reasonable steps are taken to minimize the duration and visual impact of graffiti placed on their property.”

The town has a responsibility to deal with public areas impacted by graffiti and to assist RCMP in any investigation into graffiti.

Blatz does see a bright side to the matter.

“At least they went right over a spot where we had painted over from a previous graffiti. But now this time, they went way, way bigger than the last time," he said.

“This time now it’s probably four (feet tall) by eight (feet wide), whereas the last time it was only about three by five or something.”

Blatz said another good thing from his perspective is that the Sim's and Cipperly buildings weren’t hit as badly as the skate park was.

“The amount of graffiti that that guy did that time was huge,” he said. “It’s just a random thing where somebody figured ‘hey, I’m going to go paint a sign somewhere;’ show their friends what they can do.

"It’s not good, but hopefully we can catch those buggers and break a couple of knuckles, that would be nice,” Blatz added jokingly.

The municipal enforcement department is assisting RCMP in the investigation of the incident.

In 2019, the town looked at possibly buying a machine to clean up graffiti called the Torando ACS (advanced cleaning system). The price was pegged at $20,000.

"We did investigate (buying it) but determined this wasn’t a feasible expense, based on the results and usage,” Merritt wrote in an email.