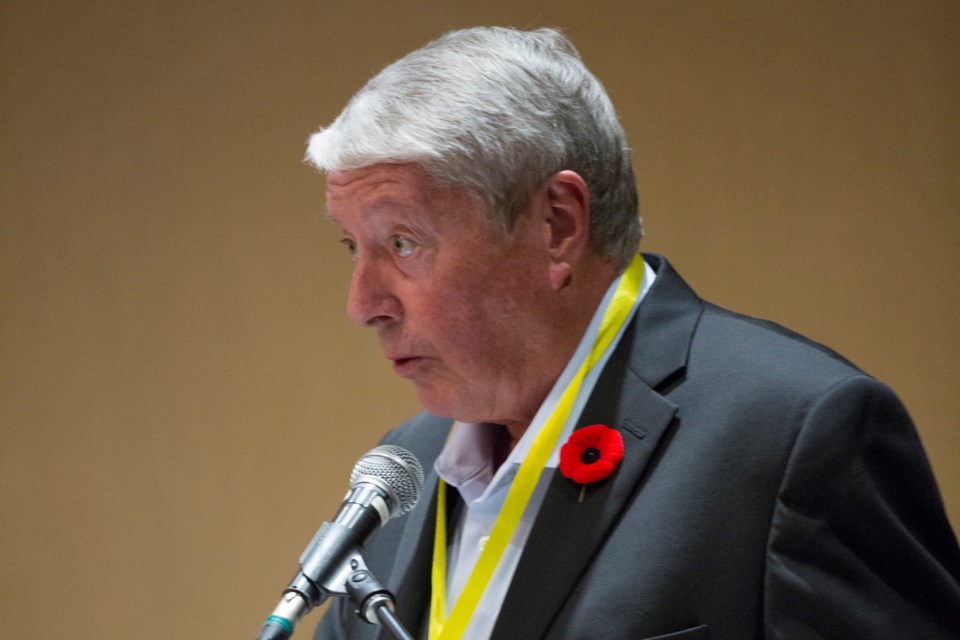 Stephen Lindop gives a presentation on geothermal energy during the Synergy Alberta Conference at the Pomeroy Inn & Suites.

OLDS — Mayor Michael Muzychka says town-owned buildings may be powered with geothermal energy if that’s the most efficient use of tax dollars.

He made that statement during a conference held in Olds in late fall.

Geothermal energy involves drilling holes deep into the earth around buildings and putting water in those pipes to create steam from heat that occurs naturally in the ground.

“Well, it’s certainly an interesting concept and something that’s incredibly environmentally friendly; like with no fracking and a totally enclosed system like this new technology is using,” he said.

“Yeah, the applications would be fantastic. Whether it’s cost prohibitive or not, that we’d have to do a little research on.”

Muzychka was reacting to a presentation on geothermal energy made by Stephen Lindop, vice-president, business development for Eavor Technologies Ltd.

Lindop, a former high school principal and mayor of Devon, Alta. (near Edmonton) spoke on geothermal energy during Synergy Alberta's conference entitled Powering Our Future, at the Pomeroy Inn & Suites.

“The core just radiates heat out. So as it’s passing through these pipes it picks up the heat. We bring it to the surface,” he said during an interview.

Lindop said not only is geothermal energy good for the environment because it doesn’t burn fossil fuels like other forms of energy do, but the industry also hires a lot of former oilpatch workers.

“We could put the drillers back to work -- right now. Put thousands of people back to work in Alberta for decades,” he said.

Lindop said those drillers are paid on a level that they currently receive in the oilpatch because they’re being lured from that industry.

He added that Eavor hires oilpatch engineers to design the systems as well.

Lindop said his company currently has about 25 employees, some 20 of whom are former oilpatch drillers.

“The phone is ringing,” he said.

Lindop said they’ll be drilling holes for geothermal in the Drayton Valley area in the second quarter of this year.

“The Town of Drayton Valley is building an omniplex with a pool and they’re looking at using a green source of baseload power to heat it, vent it and do all that work,” he said.

“Brazeau County is looking at taking all of the county buildings off the grid and doing the electricity.”

Lindop said they also have 450 million euros of work lined up in the Netherlands for the second quarter of 2021.

However, Lindop said businesses or communities might choose to have conventional power from oil or gas on standby just in case.

“Redundancy is a good thing when you have 40-below weather, so it would still be there, but you wouldn’t be using it, unless it was an emergency,” he said.

“We can compete directly head to head with coal in Alberta. And coal’s being phased out. So we’re there in the market. And as drilling costs come down, we’ll be even more competitive.”