Fossil dating back to dinosaur era found near Carstairs 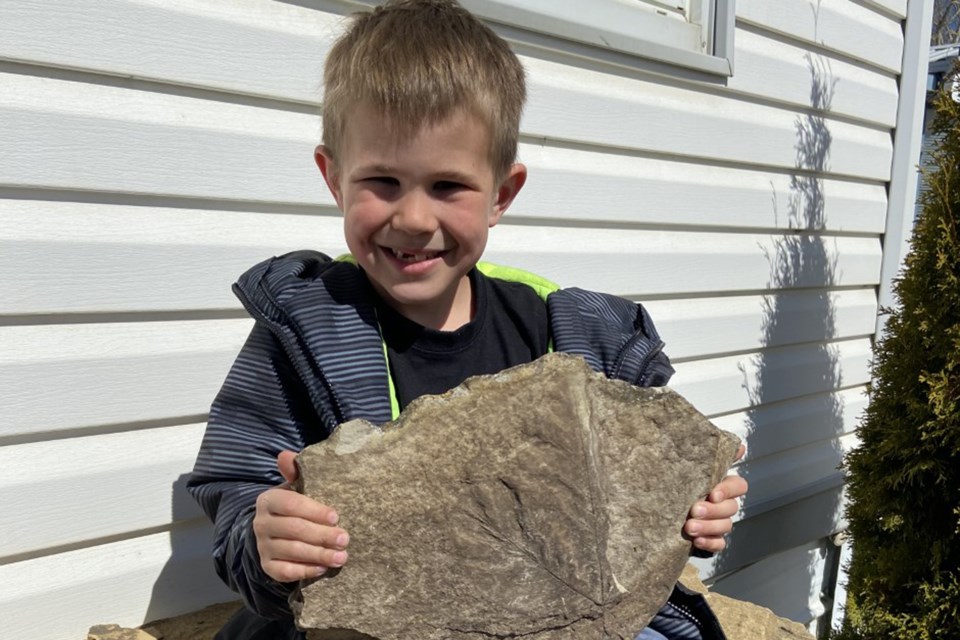 Radek Pyzalski with the fossilized leaf he found. Submitted photo

OLDS — A six-year-old Olds boy has found what is believed to be a fossilized leaf dating back to around the time of dinosaurs.

Radek Pyzalski’s mom Shannon, his two siblings and a friend were just as excited as he was when they found the specimen at a farm about 10 minutes east of Carstairs on April 19.

The plan is to donate it to the Royal Tyrell Museum which is currently closed due to the COVID-19 pandemic.

Shannon has been told the fossil can be held in trust by the family, but ultimately is the property of Alberta.

The fossil looks like a giant leaf. Museum officials aren’t sure exactly what kind yet, because there are no paleobotanists on staff there.

However, photos Shannon took have been shared with a paleobotanist in Manitoba who’s anxious to come and take a look at it.

The initial belief is that it may be some kind of sycamore tree leaf from around the time of the dinosaurs.

The family was having a picnic when the fossil was found.

“We were just going for a walk and there’s quite a bit of sandstone down there and it’s all in layers. The kids were peeling layers off and throwing them in to the river,” she said.

Radek pulled back a layer of rock and began throwing it up in the air several times.

“The third time he did it, it dropped upside down. And that’s when we saw the leaf. It’s huge,” she said, adding they were puzzled as to how it got there because the area is all grassland.

“So we all kind of stood there and looked at it and we’re going ‘well that’s a leaf, but that’s from nowhere around here.’”

When they got home, Shannon measured the rock that contains the fossil. It’s 11.5 inches tall and 15 inches wide.

She said it looks like another leaf or part of the leaf broke off. They went looking for the other part but were unable to find it.

Initially, Radek didn’t want to donate the fossil to the museum. He’s a huge dinosaur fan.

“He’s been interested for a long time,” Shannon said. “He’s loved dinosaurs. He’s got tons of them in his room. He loves watching Jurassic Park and Jurassic World. He’s got video games of Jurassic World.

“All he sleeps in is dinosaur pjs,” she added. “I have to wash them every second day.”

Radek changed his mind about keeping the fossil when museum officials indicated that when the family brings it to the museum, they’ll be given special permission to go behind the scenes and tour rooms where fossils are stored.

A spokesperson for the museum confirmed that offer to the family as well as the speculation as to what kind of fossil it is.

Shannon agreed that finding the fossil is a perfect opportunity for a science class while she and her kids stay home during the pandemic.

Former area Member of Parliament dies at 85
Jun 2, 2020 3:00 PM
Comments
We welcome your feedback and encourage you to share your thoughts. We ask that you be respectful of others and their points of view, refrain from personal attacks and stay on topic. To learn about our commenting policies and how we moderate, please read our Community Guidelines.